Community health centers play an increasingly important role in the US health care system. Launched in 1965 as a small experiment in bringing comprehensive primary care to rural and urban medically underserved communities, health centers have grown steadily over five decades following studies showing their effectiveness, not only in creating access to health care but in improving health on a community-wide basis.1 Today’s health centers offer a wide range of services spanning a full spectrum of care for conditions that can be successfully managed in community settings. Services found at health centers range from basic preventive medical and dental care to advanced treatment for serious and chronic physical and mental health conditions.

This issue brief provides a 2016 snapshot of health center patients and operations, including the services they furnish, their staffing, and their financial characteristics. It also examines changes in access to care and utilization of services by health center patients following the implementation of the coverage expansions through the Affordable Care Act (ACA) in 2014. 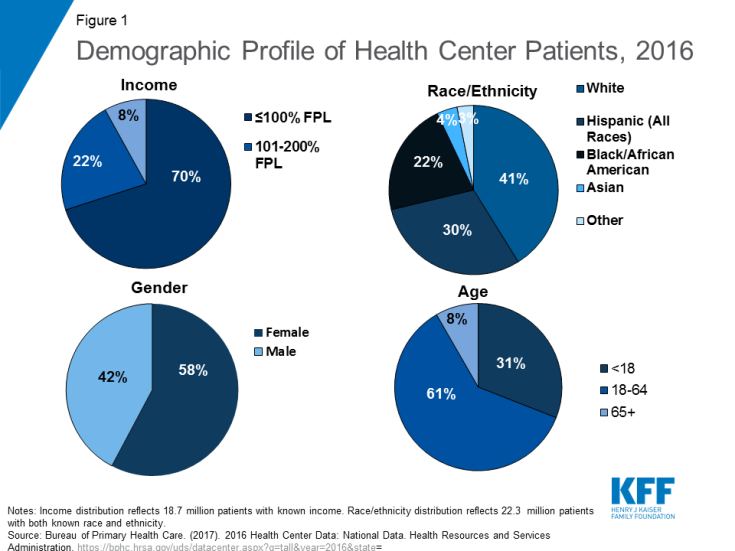 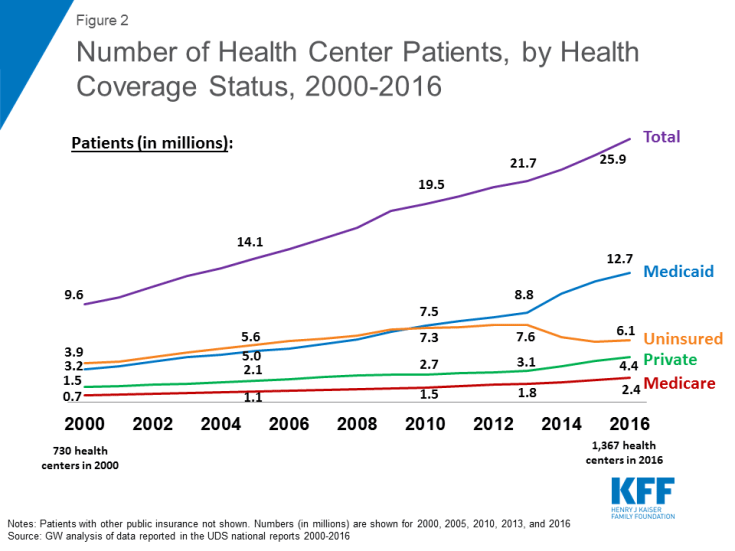 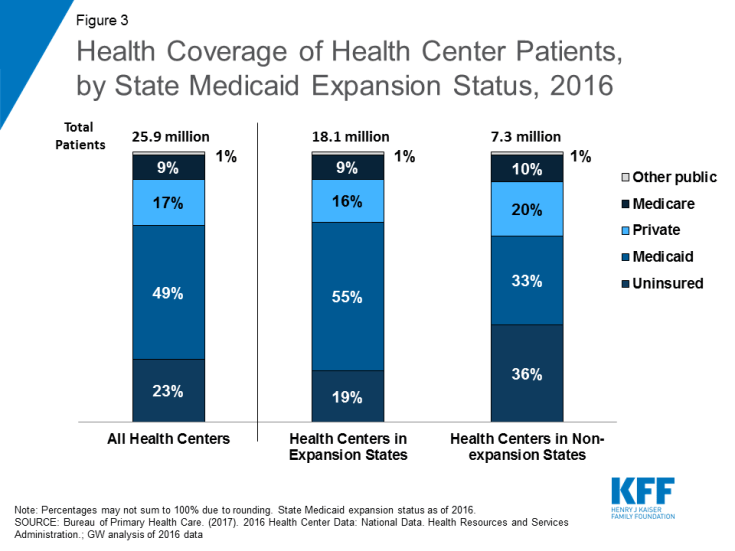 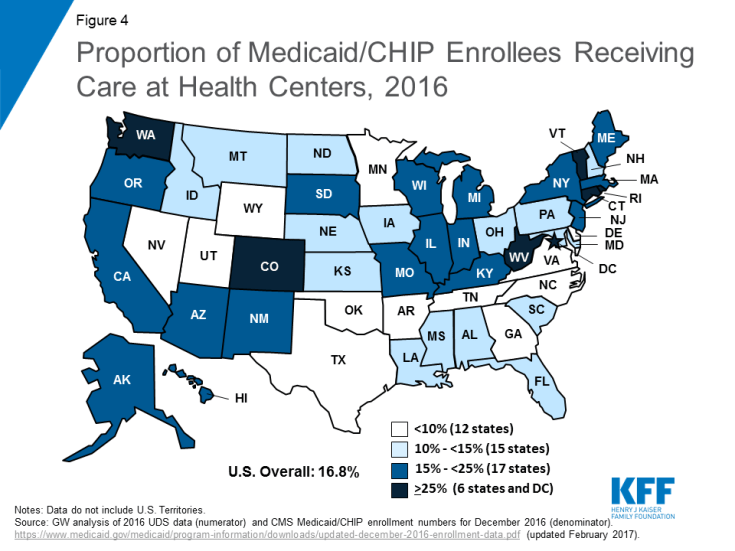 Medicaid and Federal 330 grants account for the majority of health center revenues. Health centers depend on a number of revenue sources, but revenue from Medicaid and federal Section 330 grant funds dominate. Medicaid represents the single largest source of funding, accounting for 43% of total health center revenues in 2016 (Figure 5). Federal Section 330 grants, funded through a combination of annual appropriations and the Community Health Center Fund,5 represent the next largest source of revenue at 19%. These federal grants make it possible for health centers to reach uninsured populations and to offer services for which there is no source of insurance coverage, such as adult dental care, covered under Medicaid on a comprehensive basis in only 15 states in 2016.6 Grant funding also supports health centers’ obligation to discount their charges in accordance with patients’ ability to pay (a legal requirement of the health center program). Critical not only for uninsured patients, but also for those enrolled in private insurance plans that have large deductibles and other out-of-pocket costs, these discounts ensure access to affordable care for health center patients. 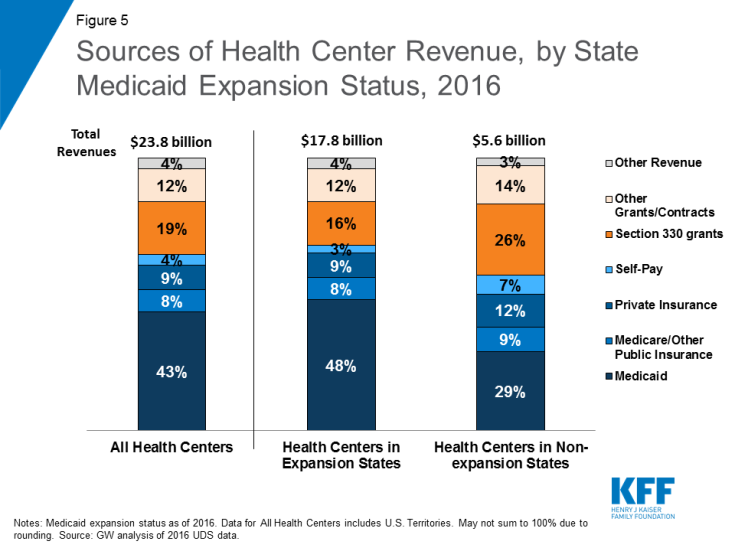 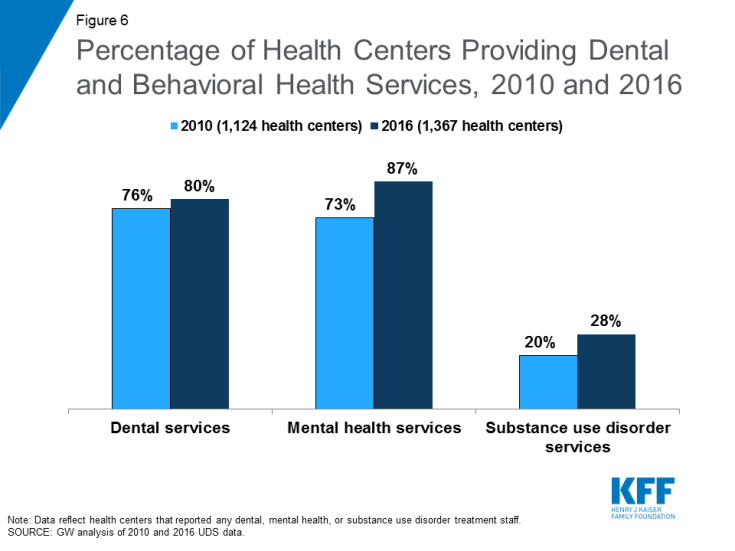 The National Health Service Corps (NHSC), which provides scholarship and loan repayment assistance to support training of primary health care medical and dental professionals, represents a key source of health center staffing. There are currently 8,153 FTE providers employed by the NHSC10 and community health centers account for about half of NHSC sites.11 According to HRSA estimates, NHSC assignees account for 19% of clinical staff working at health centers.12

Following implementation of the ACA, fewer health center patients reported they could not get the care they needed. Leading up to the implementation of the ACA’s coverage expansions in 2014, many experts expressed concern over whether primary care providers, especially safety net providers, had the capacity to ensure access to care for the millions of people who would gain coverage through the expansion of Medicaid and the Marketplaces. They feared that while low-income adults might gain coverage, they would face long wait times or other barriers to getting needed care. Recently released data from the Health Center Patient Survey from 2014 indicates that health center patients experienced fewer barriers to accessing needed care following the coverage expansions in 2014 compared to 2009. Specifically, between 2009 and 2014, the proportion of nonelderly adult health center patients reporting an inability to obtain medical and dental care declined significantly, from 23% to 15% for medical care and 45% to 34% for dental care (Figure 7). The share reporting they could not access needed prescription drugs increased slightly; however, this change was not significant. 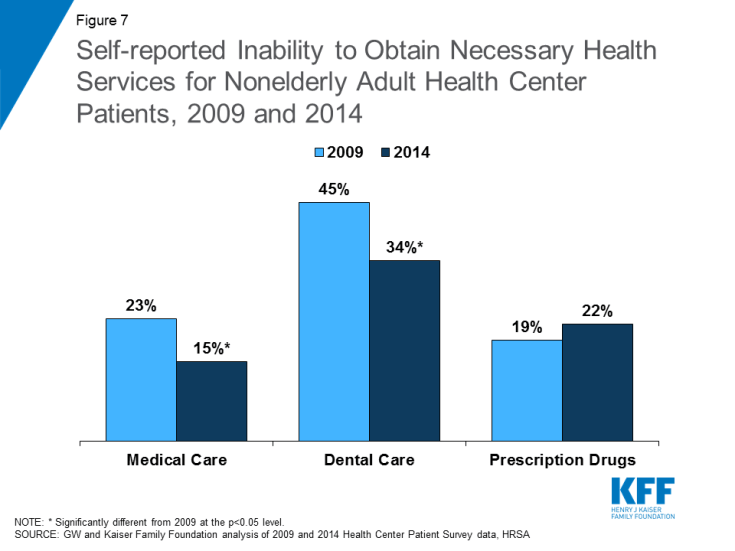 Examining these trends by patient health insurance status reveals that the share of uninsured patients reporting an inability to get medical services dropped by nearly half from 37% in 2009 to 20% in 2014 (Appendix Table 1). This significant improvement in the ability of uninsured patients to access medical care may be the result of efforts by health centers to expand their capacity with funding made available by the ACA. This finding also underscores the importance of federal grant funding in supporting health centers’ commitment to serving uninsured patients. While Medicaid patients did not experience the same degree of improvement in their ability to access medical services, they were less likely than uninsured patients to report inability to access care (14% vs. 20% in 2014). However, Medicaid patients experienced significant improvements in access to dental care.

The share of patients reporting delays in getting needed health care services also declined, but some health center patients continue to face challenges in getting the care they need. Increases in insurance coverage through the ACA also did not result in longer wait times for health services, as some policymakers feared. From 2009-2014, the proportion of health center patients reporting delays in obtaining needed medical and dental care and prescription drugs also declined (Figure 8). However, despite improvements in coverage, in the first year of full implementation of health reform some health center patients continued to face challenges getting needed care in a timely manner, possibly because of a surge in people seeking care as insurance reforms rapidly took effect. These challenges were particularly prominent in the case of dental care, with roughly a third of patients reporting an inability to obtain care and a third reporting delays in obtaining care. Additionally, over one in five health center patients reported not being able to get needed prescription drugs in 2014. This barrier may result from restrictive drug formularies, particularly for Marketplace plans, but also for Medicaid in some states. 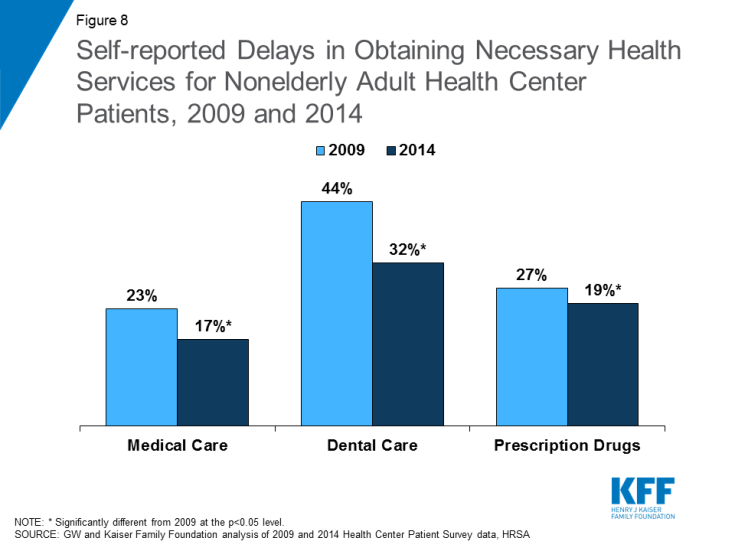 Utilization of preventive services increased among health center patients from 2009 to 2014. Health center patients in 2014 were more likely than those in 2009 to report having received a flu shot and having had a physical exam during the previous year (Figure 9). Uninsured patients were also significantly more likely to have had a physical exam and a dental exam in 2014 than in 2009 (Appendix Table 2). These changes are likely a reflection of increases in insurance coverage, which not only facilitates access to many necessary services but also increases health centers’ capacity to provide both physical and dental health care to all patients, regardless of their insurance status. 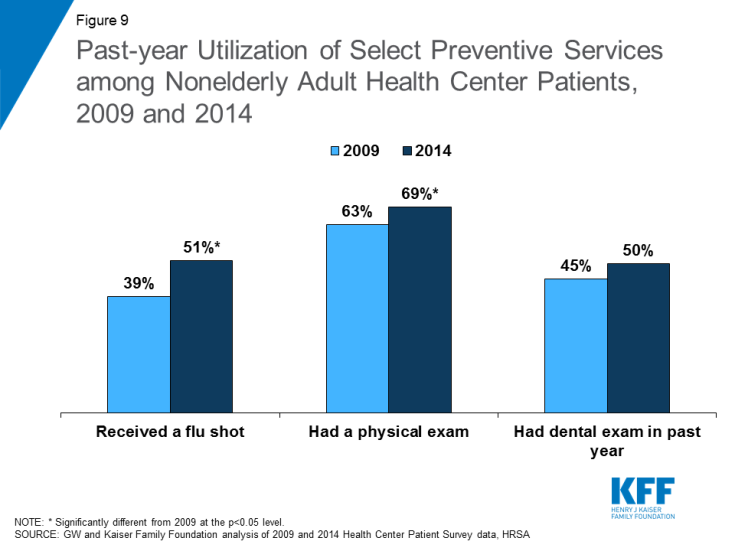 In a rapidly changing health care environment, important opportunities and challenges for health centers continue to emerge. Health centers reach 26 million people, but more than 90 million live in medically underserved communities.13 As the principal program for anchoring primary health care in underserved communities, continued growth in the health center program will broaden access to care in these communities, particularly given the strong evidence of the role of primary health care in a high performing health system. However, growth depends on steady, reliable revenue in order to hire staff, to expand the range of services offered, and to add hours and locations. Given the communities in which health centers operate, Medicaid and federal section 330 grants represent the two most important sources of revenue.

The recent delay in extending the Community Health Center Fund (CHCF), which provides 70% of all grant funding on which health centers rely in order to support the cost of uncovered services and populations, underscores the impact funding uncertainty can have on the ability of health centers to serve their patients. The CHCF expired on September 30, 2017 and was not renewed until February 9, 2018. Preliminary data from a 2018 survey of community health centers revealed that health centers had begun taking a number of actions in response to the funding delay, and many more were considering actions.14 Nearly two-thirds reported they had or would institute a hiring freeze and 57% said they would lay off staff. Six in ten reported they were canceling or delaying capital projects and other investments and nearly four in ten said they were considering eliminating or reducing dental health and mental health services. With the CHCF reauthorized for two years, it is likely that many health centers will halt or reverse these decisions; however, their responses highlight the challenge funding uncertainty poses to the ability of health centers to sustain their operations.

Looking ahead, the resolution of the funding cliff is important, but it is also relatively short-term. Preventing future cliffs that have a disruptive effect on essential health center operations will help sustain the program over time and better ensure stability within the primary care system, a crucial dimension of access and quality.  One approach under discussion would extend the period of funding for health centers and the National Health Service Corps similar to the 10-year funding approach now established for CHIP. This strategy could enable health centers to make long-term operational decisions without concern over whether funding would be available from one year to the next.

State decisions on the ACA Medicaid expansion have also had a significant effect on the capacity of health centers to serve low-income communities. Health centers in states that expanded Medicaid have more sites, serve more patients, and are more likely to provide behavioral health and vision services than health centers in non-expansion states. The service delivery implications of 18 states opting not to expand Medicaid continue to limit health center capacity.

Finally, increasing access to care remains a key focus for health centers. Findings from the Health Center Patient Survey indicate that access to needed care for health center patients improved overall in the immediate period following implementation of the ACA. Increases in insurance coverage among health center patients, along with enhanced investment in the health center program, contributed to improvements in the ability of patients to get the care they need and in reduced delays in obtaining needed care. Access to preventive services, including annual physicals and flu shots, also improved. However, some patients continue to face barriers to care, particularly uninsured patients. Maintaining recent coverage gains through the Medicaid expansion and the Marketplaces and continued stable funding for health centers are important to ensuring patients in medically underserved and rural communities can access the care they need.

Additional funding support for this brief was provided to the George Washington University by the RCHN Community Health Foundation.