Most of the Public Favor a Range of Police Reforms to Curb Excessive Force, though Partisan Gaps Exist on Some Key Proposals

Amid nationwide protests against racial bias in law enforcement and beyond, a new KFF poll finds that the vast majority (71%) of Black Americans say they’ve experienced some form of racial discrimination or mistreatment during their lifetimes – including nearly half (48%) who say at one point that they felt their life was in danger because of their race.

When asked about interactions with law enforcement during their lifetimes, 4 in 10 (41%) Black Americans say they have been stopped or detained by police because of their race, and 1 in 5 Black adults (21%), including 3 in 10 Black men, say they have been a victim of police violence. A third as many Hispanics (8%) and relatively few Whites (3%) report such negative interactions with police over their lifetimes.

Blacks are also much more likely than Hispanics or Whites to say they have been denied a job for which they were qualified (40%, 15%, and 8%, respectively) or denied housing they could afford due to their race (26%, 8%, and 3%, respectively). 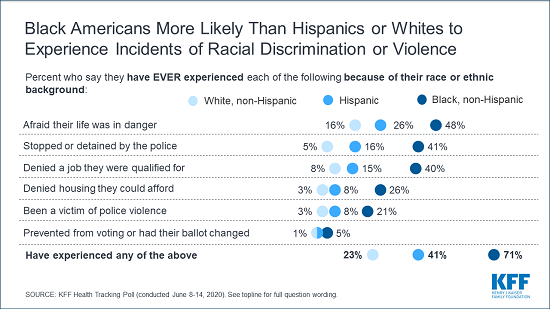 Fielded June 8-14, the poll probes into issues of racial and ethnic bias and discrimination and the national conversation about race sparked by recent deaths of Black Americans at the hands of police, as well as the subsequent protests, clashes, and in some cases, looting and vandalism.

The poll finds large shares of Americans view racism, police violence and violence caused by protestors as at least somewhat of a problem in the country today, though there are deep partisan divisions on these issues.

For example, most Democrats (82%) and independents (59%) say racism is a big problem nationally, while only a quarter (25%) of Republicans say so.

Partisans also differ in their awareness about the COVID-19 epidemic’s disproportionate impact on Black and Hispanic communities and broader disparities in health care. For example, Democrats are twice as likely as Republicans to know that Black Americans are more likely than White Americans to get sick or die from coronavirus (69% vs. 34%).

Most of the Public Support Banning Chokeholds and No-Knock Warrants, Though Partisan Gaps Remain

Bipartisan majorities support a range of other proposed reforms, including:

The poll finds two thirds of the public (64%) support the recent protests against police violence across the country, while three in ten oppose the protests (30%). Majorities across racial and ethnic groups support the protests, as do most Democrats (86%) and independents (67%), though most Republicans (57%) oppose them.

At the same time, a slight majority (56%) of the public say they are very or somewhat worried that protests may lead to an increase in coronavirus cases in their area. Democrats and Black Americans – groups that are most likely to support the protests – are also among the most likely to say they are worried about the protests leading to an increase in coronavirus cases (73% and 68% respectively).

Overall, 1 in 10 adults say they recently attended an event to protest police violence or in support of Black Lives Matter or other racial justice issues. About half (52%) of those who report attending a protest are under 30 years old, and a similar share (53%) are college graduates. Most identify as Democrats (46%) or independents (42%), with just 6% identifying as Republicans.