Will Poor Health Status in the South Be an Issue in 2016 Primaries? 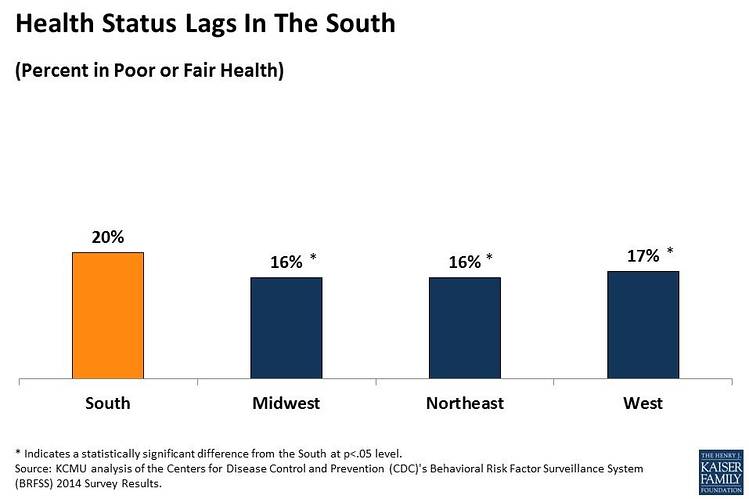 Before the New Hampshire primary, Democratic and Republican candidates talked a lot about the state’s opioid epidemic, an issue that ranked high among public concerns in Granite State polls. The 2016 campaign has moved south, with South Carolina’s Republican primary on Saturday and votes to follow in 10 more of the 17 southern states by March 15, but there has been little discussion of poor health status in the region.

The South has no special ownership of poverty or poor health, but the region has the worst health status in the nation by most measures. Overall, one in five people are in fair or poor health in the South, a higher percentage than any other region in the U.S., the Kaiser Family Foundation has found. Virtually all southern states rank among those with the highest rates of adult diabetes and most of the states with the highest obesity rates are in the South. Infant mortality is higher in the South than any other U.S. region. Cancer death rates are a little lower in the South than in the Midwest, but they are much higher than those in the West and the Northeast. South Carolina has a higher rate of cancer-related deaths than the southern states overall or the U.S. nationally.

Fewer people have health coverage in the South: 18% of the adult non-elderly population is uninsured in the South since enactment of the Affordable Care Act, compared with 12% in the rest of the country. The highest uninsured rates are generally in the 10 southern states that have not opted to expand Medicaid under the ACA. In South Carolina, 123,000 residents fall into a coverage gap: They are poor adults who earn too much to qualify for Medicaid but not enough to qualify for premium tax credits, which begin at 100% of the federal poverty level.

Southerners are more likely to be poor than people in any other region of the U.S. Blacks account for 19% of the population in the South, compared with 8% in the rest of the nation. A substantially higher share of blacks–13.5%–were uninsured in the South in 2014 than whites (9.3%). More than four in 10 of all people of color live in the South.

Talking about the opioid epidemic in New Hampshire was, for many reasons, probably easier than digging into these issues: That was a single health problem that affects whites and minorities and both the middle class and those with lower incomes. By contrast, poor health status in the South, with its deep connections to poverty and race, is more complex and multifaceted. There is political space for candidates in both parties: Democrats might focus on the need for government programs, including Medicaid expansion throughout the region. Republicans, who generally oppose such proposals, might focus on other ways to improve health status at the state and community levels. Public health, and improving care and outcomes, has a connection to many of the things candidates are saying about jobs and the economy, as well as ways to improve race relations and the criminal justice system. We will see, as the SEC primaries get going, how much attention the health status gap gets.