The Affordable Care Act (ACA) has provided millions of Americans with new access to insurance coverage, in some cases for the first time. While a significant body of research has explored how the law has affected different populations, limited information has been available on insurance coverage changes by sexual orientation, in part due to the dearth of available nationally representative data about lesbian, gay, bisexual, and transgender (LGBT) individuals and insurance status.1

This data note provides the most up to date nationally representative estimates of insurance coverage changes among self-identified lesbian, gay and bisexual adults (LGB) under the ACA. It compares survey responses of nonelderly adults using the Sample Adult component from the Centers for Disease Control and Prevention’s (CDC) National Health Interview Survey (NHIS), 2013 and 2016 cycles.2 We find that rates of uninsurance decreased significantly among LGB adults after the implementation of the ACA’s major coverage changes. There was also a significant increase in Medicaid coverage. We were unable to examine changes in private insurance coverage due to sample size limitations.

Historically, lesbian, gay, and bisexual individuals have faced barriers in accessing healthcare.3 Challenges result from stigma and discrimination, inequality in the workplace, refusal of care, and denial of coverage related to sexual orientation or gender identity. Prior to the ACA, insurance companies could deny LGBT individuals insurance coverage, exclude certain services (e.g. those related to gender transition), or charge higher rates based on sexual orientation or gender identity. Issuers were also able to deny insurance coverage or charge higher rates to people with health conditions that disproportionally affect LGBT individuals such as HIV, mental illness, and substance use disorders.4

Under the ACA, insurers are no longer permitted to consider health status when setting rates or issuing coverage. Further, issuers are prohibited from discriminating on the basis of sexual orientation or gender identity in coverage subject to the Essential Health Benefits, including plans sold on the health insurance marketplaces. (The law and implementing regulations also include additional protections that prohibit discrimination based on sex, defined to include gender identity and sex stereotypes, in any health program receiving federal funds, including: Medicaid, Medicare, the marketplaces, and providers who receive federal funds. However, as part of an ongoing lawsuit, a federal court has issued an injunction halting enforcement of this provision’s protections around gender identity.5)

In addition to non-discrimination protections, the ACA introduced two main coverage pathways. The first is the Medicaid expansion, which provides Medicaid coverage to eligible individuals below 138% of FPL, basing eligibility on income and residency status alone rather than categorical eligibility (e.g. requiring disability or pregnancy in addition to being low-income). As a result of a Supreme Court decision, Medicaid expansion is effectively a state option and to date, 33 states (including DC) have expanded their programs.6 Second, legal US residents are now able to purchase private coverage through insurance Marketplaces with subsidies available to most between 100% and 400% of the federal poverty level (FPL).

In order to assess changes in coverage among LGB individuals under the ACA, we analyzed data for non-elderly adults from the NHIS, a nationally representative survey conducted by CDC on health and health behaviors. We compared data from 2013, prior to the implementation of major ACA insurance expansions to 2016, after implementation. We were not able to examine coverage among transgender individuals as the NHIS instrument category does not include transgender as a stand-alone category.

Using the 2013 and 2016 NHIS cycles, we estimate that there were 4.8 million U.S. adults between the ages of 18-64 who identified as lesbian, gay or bisexual in 2013, and 5.5 million in 2016. Based on both cycles, we estimate that LGB individuals in this age group make up about 3% of the US population. This is similar to estimates found in other research.7  Uninsurance declined and Medicaid coverage increased significantly for this population after the implementation of the ACA, as follows. (We are unable provide private insurance due to sample size limitations.):

During the early years of ACA implementation, the rate of uninsurance among LGB individuals fell by almost half (from 19% in 2013 to 10% in 2016), representing an estimated 369,000 fewer uninsured LGB individuals in 2016 compared to 2013. The drop in the uninsurance rate experienced by LGB groups was similar to that seen among heterosexuals over this period.8 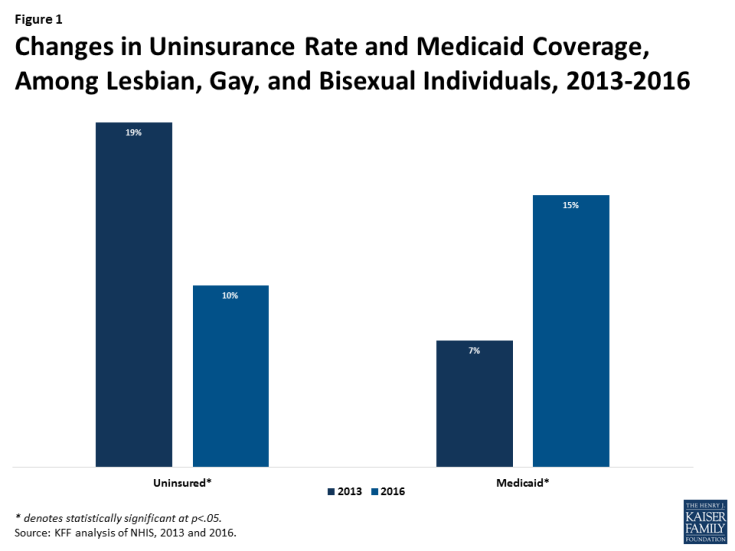 The ACA has played a significant role in increasing insurance coverage and reducing the rate of uninsurance for people in the United States and many of these gains have translated to the LGB population. Under the ACA, LGB people experienced reductions in the uninsurance rate between 2013 and 2016. Gains in Medicaid coverage have driven this trend, though it is also likely that some uptick in private insurance coverage contributed to declines in the share uninsured as well. As the Administration, Congress, and states, continue to make changes to the health landscape, including to protections for LGBT individuals, it will be important to monitor these trends in future years.