Noncitizens are significantly more likely than citizens to be uninsured. In 2020, among the nonelderly population, 26% of lawfully present immigrants and about four in ten (42%) undocumented immigrants were uninsured compared to less than one in ten (8%) citizens. Among citizen children, those with at least one noncitizen parent were significantly more likely to be uninsured as those with citizen parents (10% vs. 4%).

Research suggests that the changes to immigration policy enacted during the Trump administration contributed to increased fears among immigrant families about participating in programs and seeking services, including health coverage and care. These included policies focused on curbing immigration, enhancing immigration enforcement, and limiting the use of public assistance among immigrant families. The Biden administration reversed many of these changes and recently proposed a new rule that excludes non-cash benefits such as Medicaid and the Children’s Health Insurance Program (CHIP) from public charge determinations. However, ongoing efforts will likely be needed to reduce fears and rebuild trust among immigrant families.

The pandemic likely contributed to increased health and financial needs and declines in health coverage among immigrant families. Immigrants’ work, living, and transportation situations put them at increased risk for potential exposure to coronavirus. Noncitizen immigrants also faced risk of financial difficulties due to the pandemic, as many work in service industries, such as restaurants and food services, that suffered cutbacks during the early phases of the pandemic. At the same time, immigrants have had more limited access to COVID relief, and data suggest that immigration-related fears may have contributed to reluctance accessing COVID-19 vaccines.

Recent federal and state activity has focused on expanding access to health coverage for immigrants, but broad sustained efforts to rebuild trust and reduce fears also will be important for supporting the health and well-being of immigrant families. At the federal level, legislation has been proposed that would expand eligibility for health coverage for immigrants, though it faces no clear path to passage in Congress. In addition, states are continuing to take up federal options to expand Medicaid and CHIP coverage for lawfully present immigrant children and pregnant people. Moreover, several states have recently proposed or taken action to expand state-funded coverage to low-income people regardless of immigration status. Other recent activity may help increase enrollment among immigrants who are eligible for coverage options. As noted, the Biden Administration proposed new public charge rules, which may help reduce fears among immigrant families about participating in non-cash assistance programs, including health coverage. Further, the Administration increased funding for Navigator programs, which provide enrollment assistance to individuals. However, even with these actions, it will likely take time and sustained community-led efforts to rebuild trust and reduce fears surrounding the use of services among immigrant families.

A total of 19.2 million or one in four children had an immigrant parent as of 2020, and the majority of these children were citizens. About 9.7 million or 13% were citizen children with a noncitizen parent. 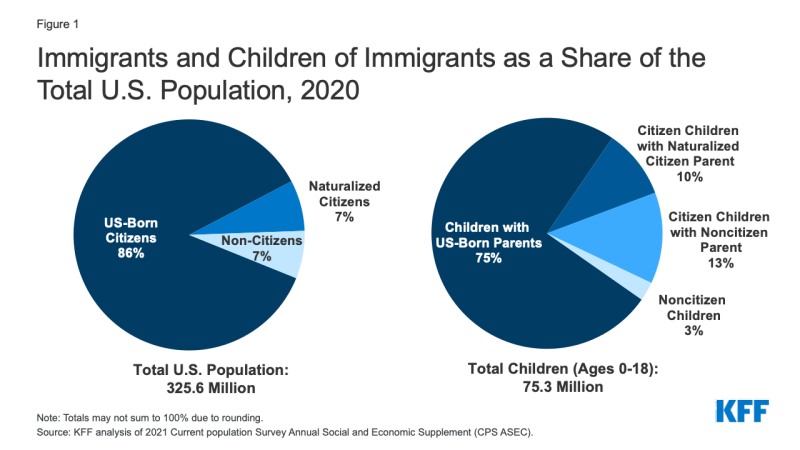 Figure 1: Immigrants and Children of Immigrants as a Share of the Total U.S. Population, 2020

Lawfully present immigrants are noncitizens who are lawfully residing in the U.S. This group includes legal permanent residents (LPRs, i.e., “green card” holders), refugees, asylees, and other individuals who are authorized to live in the U.S. temporarily or permanently. Individuals who have received deferred action are authorized to be present in the U.S. and therefore considered to be lawfully present. However, individuals with Deferred Action for Childhood Arrivals status are not considered to have an immigration status that is eligible for federally-funded health insurance (see below).

In 2020, more than three-quarters (76%) of the 27.3 million nonelderly uninsured were U.S.-born and naturalized citizens (Figure 2). The remaining 24% were noncitizens.

Barriers to Health Coverage for Noncitizens

Although most nonelderly noncitizens live in a family with a full-time worker, they face gaps in access to private coverage. Nonelderly noncitizens are as likely as nonelderly citizens to be living in a family with at least one full-time worker, but they are more likely to be low-income (Figure 5). They have lower incomes because they are often employed in low-wage jobs and industries that are less likely to offer employer-sponsored coverage. Given their lower incomes, noncitizens also face increased challenges affording employer-sponsored coverage when it is available or through the individual market.

Undocumented immigrants are not eligible to enroll in Medicaid or CHIP or to purchase coverage through the ACA Marketplaces. Under rules issued by the Centers for Medicare and Medicaid Services, individuals with Deferred Action for Childhood Arrivals (DACA) status are not considered lawfully present and remain ineligible for coverage options. Medicaid payments for emergency services may be made on behalf of individuals who are otherwise eligible for Medicaid but for their immigration status. These payments cover costs for emergency care for lawfully present immigrants who remain ineligible for Medicaid as well as undocumented immigrants. Since 2002, states have had the option to provide prenatal care to people regardless of immigration status by extending CHIP coverage to the unborn child. As of January 2022, 18 states have adopted this option. Unlike other pregnancy-related coverage in Medicaid and CHIP, which requires 60 days of postpartum coverage, the unborn child option does not include this coverage. However, several states provide postpartum coverage, regardless of immigration status, either through a CHIP state plan amendment or using state-only funding. In addition, some states have state-funded health programs that provide coverage to some groups of immigrants regardless of immigration status. There are also some locally-funded programs that provide coverage or assistance without regard to immigration status.

Many lawfully present immigrants who are eligible for coverage remain uninsured because immigrant families face a range of enrollment barriers, including fear, confusion about eligibility policies, difficulty navigating the enrollment process, and language and literacy challenges. Research suggests that changes to immigration policy made by the Trump administration contributed to growing fears among immigrant families about enrolling themselves and/or their children in Medicaid and CHIP even if they were eligible. In particular, changes to public charge policy that allowed federal officials to consider the use of certain non-cash programs, including Medicaid for non-pregnant adults, when determining whether to provide certain individuals a green card or entry into the U.S., likely contributed to decreases in participation in Medicaid among immigrant families and their primarily U.S.-born children. The Biden administration reversed many of these changes, including the changes to public charge policy, and recently proposed new public charge regulations that exclude use of Medicaid and CHIP, except for coverage of long-term institutionalized care, from public charge determinations.

The pandemic likely contributed to increased health and financial needs and declines in health coverage among immigrant families. Immigrants’ work, living, and transportation situations put them at increased risk for potential exposure to coronavirus and its variants. Noncitizen immigrants also faced financial difficulties due to the pandemic, as many work in service industries, such as restaurants and food services, that suffered cutbacks. Initial job losses at the start of the pandemic were particularly high among immigrants, which likely contributed to increased financial stress and potential loss of health insurance, although many employment losses have rebounded since earlier in the pandemic. At the same time, immigrants faced limits on access to COVID-19 relief, and ongoing immigration-related fears made some reluctant to access assistance, services, and COVID-19 vaccines. Some states and localities, such as California and New York, created programs to provide assistance to immigrants who were excluded from federal sources of COVID-19 assistance.

Recent federal and state activity has focused on expanding access to health coverage for immigrants. Moreover, other recent activity may help increase enrollment among immigrants who are eligible for coverage options. However, beyond these actions, broad sustained community-led efforts will likely be key for reducing fears and rebuilding trust among immigrant families.

In December 2020, Congress restored Medicaid eligibility for citizens of Compact of Free Association (COFA) communities. Compacts of Free Association are agreements between the U.S. government and the Republic of the Marshall Islands, the Federated States of Micronesia, and the Republic of Palau. Certain citizens of these nations can lawfully work, study, and reside in the U.S., but they had been excluded from federally-funded Medicaid since 1996, under the Personal Responsibility and Work Opportunity Reconciliation Act (PRWORA). As part of a COVID-relief package, Congress restored Medicaid eligibility for COFA citizens who meet other eligibility requirements for the program effective December 27, 2020.

Recent federal legislation has been proposed that would expand immigrant eligibility for health coverage, though there is no clear path to passage in Congress. In 2021, the Health Equity and Access Under the Law (HEAL) Act and Lifting Immigrant Families Through Benefits Access Restoration Act (LIFT the BAR) Act were introduced into Congress. Both acts would remove the five-year waiting period for health coverage and other assistance programs that currently apply to many lawfully present immigrants under the 1996 PRORWA rules. They also would expand the definition of lawfully present immigrants to include Deferred Action for Childhood Arrivals (DACA) recipients and certain other immigrants who are authorized to be in the U.S., so that they could qualify for federally funded health care programs. In addition, the HEAL Act would allow undocumented immigrants to access health insurance coverage through the ACA Marketplaces and to be eligible for subsidies to offset the cost of this coverage. Both acts also would ensure that lawfully present immigrants with incomes below 100% FPL may receive subsidies if they are ineligible for Medicaid based on immigration status if they live in a state that has not expanded Medicaid.

The Administration has also increased funding for outreach and enrollment assistance, which may help eligible immigrant families enroll and stay enrolled in coverage. In August 2021, CMS announced $80 million in funding for 60 Navigator programs in 30 states with Federally-Facilitated Marketplaces for the 2022 plan year, significantly higher than the annual funding awarded in 2018-2020. Navigator programs must provide information that is culturally and linguistically appropriate and can assist individuals with renewing Medicaid coverage and help those who are no longer eligible for Medicaid transition to coverage through the marketplaces. This assistance may be particularly important for helping immigrant families enroll in and maintain coverage given the complex eligibility requirements for immigrants and potential linguistic barriers and fears of negative immigration consequences.

Although noncitizen immigrants are as likely as citizens to work, they are significantly more likely to be uninsured due to more limited access to both public and private coverage. The pandemic has likely worsened the health and financial challenges faced by immigrants, as they have been at increased risk for exposure, have had more limited access to assistance, and have more limited access to health care. Recent federal and state activity has focused on expanding immigrant eligibility for health coverage. Moreover, the Biden Administration’s changes to public charge policy and increased funding for outreach and enrollment assistance may help increase access to health coverage for immigrant families. However, even with increased eligibility and enhanced outreach and enrollment assistance, it will likely require time and sustained work, including community-led efforts, to rebuild trust and reduce fears among immigrant families about accessing health coverage and care.