This column was published as a Wall Street Journal Think Tank column on September 28, 2016.

How the public responds to Donald Trump’s rhetoric about immigrants and Muslims may tell us as much about ourselves as it tells us about Mr. Trump’s candidacy. His rhetoric has not created a groundswell of anti-immigrant sentiment in the U.S., new polling suggests; rather, Mr. Trump has tapped into a reservoir of anti-immigrant feelings among a minority of Americans–some, but not all, working-class whites–that already existed and that also has been stronger at times in the past. The polling, conducted by the Kaiser Family Foundation in conjunction with CNN, found that Mr. Trump’s rhetoric about immigrants has not been as great a priority for his supporters as many might have thought and that while Americans are worried about terrorism, those fears have not translated into broader anti-Muslim sentiments. In short, the U.S. as a whole may be less xenophobic than many fear. 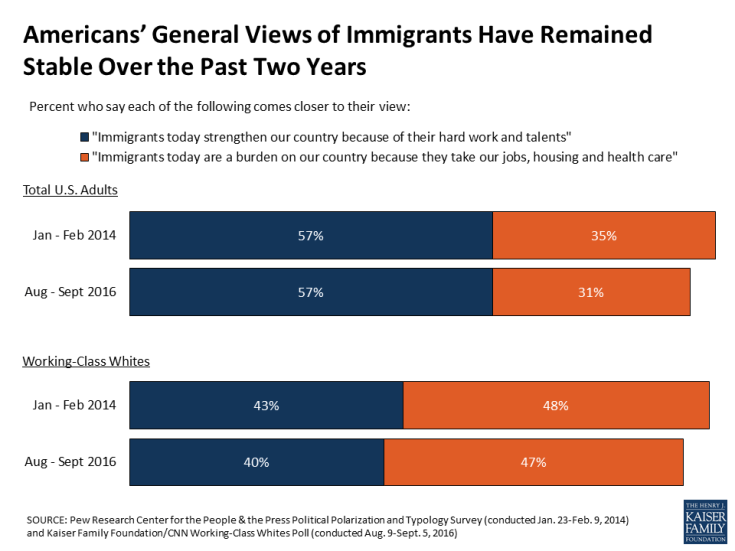 As the chart above shows, the Kaiser/CNN polling found that 57% of Americans agree with the statement that immigrants “strengthen our country because of their hard work and talents.” Pew Research Center found the same share in its own 2014 polling, conducted more than a year before Donald Trump launched a presidential campaign with immigration as its central issue. By contrast, the recent Kaiser/CNN poll found that 31% agree that “immigrants are a burden on our country because they take our jobs, housing and health care.” Pew’s number in 2014 was very similar: 35%. These views have become more positive over the past decade; in 2005, Pew found the public evenly divided between those who said that immigrants were a burden (44%) and that they strengthen the country (45%). Views were even more negative in 1994, when 63% saw immigrants as a burden and 31% called them a strength.

Working-class whites are the group most likely to see immigrants as a burden: 47% said so in the Kaiser/CNN poll conducted in August and early September. (The Kaiser Family Foundation regularly polls with media organizations on social issues, including immigration, race, and feminism.) The 2014 Pew poll found a nearly identical share: 48%. In the Kaiser/CNN poll, working-class Hispanics (74%) and white college graduates (67%) were much more likely to say that immigrants strengthen our country; 57% of working-class blacks said the same thing. For all the media attention they have received, Mr. Trump’s immigration positions do not appear to be a leading factor for large numbers of his supporters. The latest Pew election poll included an open-ended question asking respondents to list the main reason they would vote for him in November; 8% of voters who support Mr. Trump named immigration. When given a list of issues from which to choose the reasons they support Mr. Trump, immigration came in fourth, and his views on terrorism ranked No. 1.

Working-class whites are not a monolithic group when it comes to views on immigration or anything else we polled about. Generally, rural and evangelical working-class whites hold more negative views toward immigrants on a range of questions. And while most are Trump voters, 29% of this group said they would consider voting for Hillary Clinton. The results were a reminder that broad-brush characterizations of this group often fail to reflect its nuances. 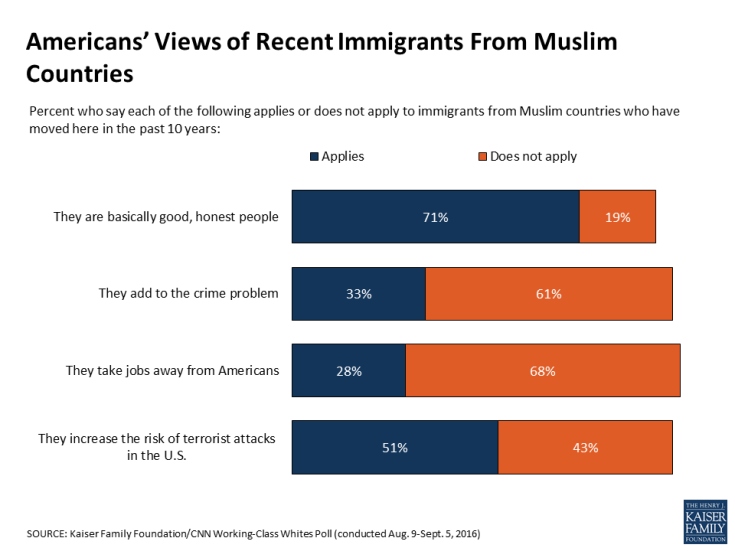 There is no prior-year comparison for sentiments about Muslim immigrants, but views in the Kaiser/CNN poll were mixed. As the chart just above shows, fully 71% of the public agree that people who came here in the past 10 years from Muslim countries “are basically good, honest people.” Within that share, 63% of working-class whites agreed with that. Most Americans do not think Muslim immigrants add to crime or take jobs away from Americans. But respondents do have terrorism as a top concern, and 51% say that Muslim immigrants “increase the risk of terrorist attacks” (43% say they do not). As on virtually every immigration question, white working-class Americans stand out: 63% say immigrants from Muslim countries increase the risk of terrorist attacks.

A lot has been said about Donald Trump’s rhetoric and its potential effect on sentiments toward immigrants and Muslims in this country. Our polling suggests that most Americans have not embraced a new anti-immigrant fervor. It is worth noting that Americans distinguish their views about Muslims who come to the U.S., which are largely positive, from their concerns about terrorism. That suggests that greater efforts to tell the positive stories about Muslim-Americans could counterbalance fears about terrorism and lead to a more thoughtful public discussion.