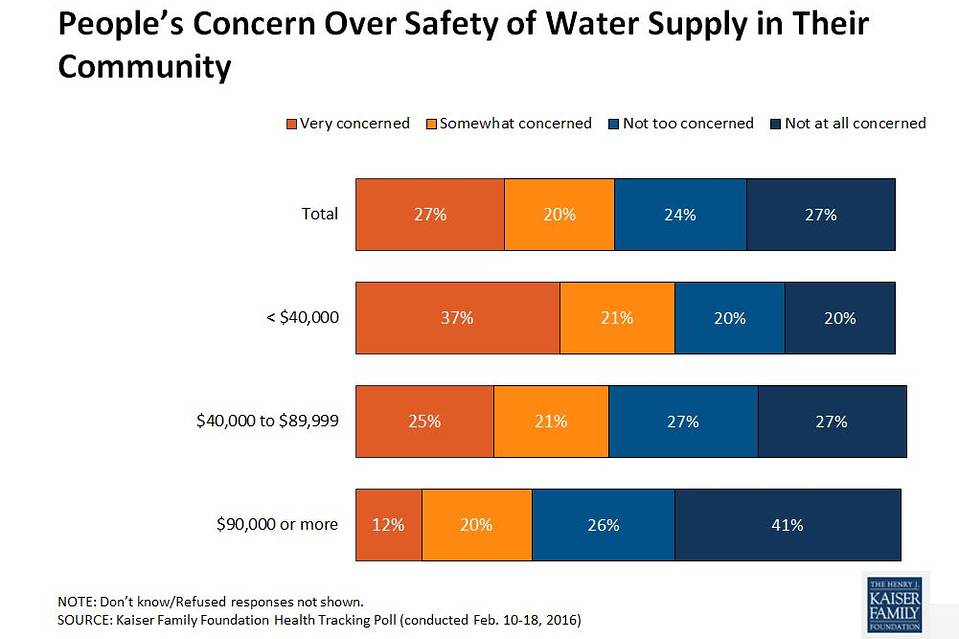 Michigan Gov. Rick Snyder and Environmental Protection Agency administrator Gina McCarthy testified before the House Committee on Oversight and Government Reform on Thursday about the contaminated water in Flint, Mich., and state and federal regulation of the water supply. Most Americans say they have been following the issue, and many say they are worried about drinking-water safety, polling has found. As with many issues in our country, the poorer people are, the more worried they are likely to be that the system will fail them and their family.

In the Kaiser Family Foundation’s Health Tracking Poll in February, nearly two-thirds (64%) of Americans reported closely following news about unsafe levels of lead in the water supply to Flint, Mich. A similar share said that they have heard or read a lot (34%) or some (28%) about it. As the chart above shows, about half of all Americans (47%) say they are concerned about the safety of the water supply in their own community, and 27% say they are very concerned. People with lower incomes are the most worried: 37%, or more than a third, of people earning less than $40,000 a year say they are very concerned about the water supply in their own community, compared with 12% of those who earn $90,000 or more.

It’s hard to say whether news of the contamination of Flint’s water supply exposed a public worry that lurked beneath the surface or triggered new concerns about something that most people had taken for granted. There is a legitimate debate in this country about the role of government generally, but few argue about government’s obligation to provide safe drinking water. When government fails at this most basic job, the public notices. And when government fails a low-income and heavily-minority community such as Flint, it touches a nerve in other low-income areas across the country.