As we mark its anniversary on September 20th, and another monster hurricane bears down on the East Coast, The Washington Post is reporting the results this week of a survey we did with the paper of how people in Puerto Rico feel about the response to hurricane Maria. The debate about the response to  Maria has pitted rising estimates of the death toll attributed to the hurricane against President Trump’s claims that the administration did a “fantastic job” responding to the storm.

We compared residents’ views of the federal response in Puerto Rico to those in New Orleans after Katrina and the Texas Gulf after Harvey. We can do this because we did a series of five surveys at KFF in the New Orleans area after Katrina, including one with The Washington Post in the Houston shelters immediately after the storm, two surveys after Harvey with the Episcopal Health Foundation in Texas, and the new survey in Puerto Rico with The Washington Post. This chart summarizes the results. 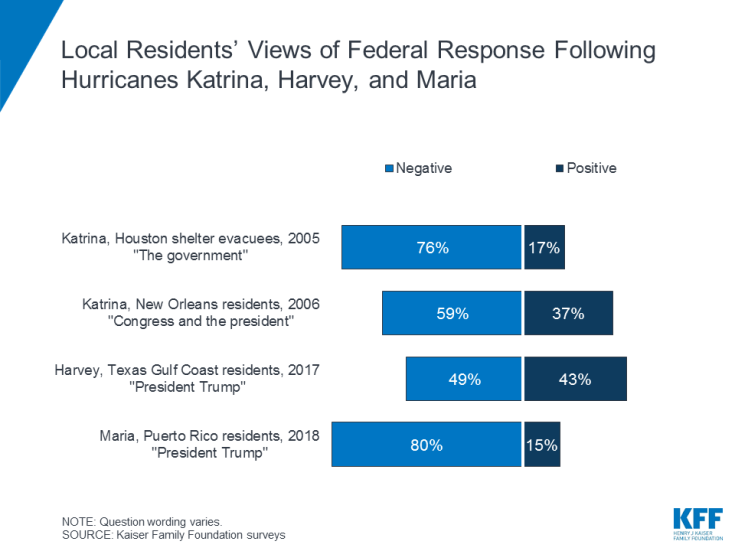 Here are some key numbers from the surveys.

Each one of these disasters was different. People’s attitudes in Puerto Rico may reflect a longstanding feeling that the mainland and Washington do not care enough about them, even if you can find similar feelings in urban areas such as New Orleans. Katrina’s impact was magnified by the searing images of people abandoned on their roofs after the levees broke.

Still, we found that 83% of residents in Puerto Rico reported that the lives were changed by Maria when it damaged or destroyed their homes, or caused them to lose their jobs or income, among other effects. And there have been many riveting reports of suffering from the hardest hit parts of Puerto Rico. We did not have a way to survey people who have left Puerto Rico because of Maria and not returned, most of whom, by definition, had their lives changed by the storm.

Katrina and its gripping TV images probably still set the standard for post hurricane horror. But when you look at how residents feel about the federal response and the number of lives disrupted, Maria looks more like Katrina than we may have realized.