As reported in Foreign Policy, a draft of the Trump administration’s FY18 budget request for the State Department and USAID, expected to be submitted in full to Congress in May, proposes significant cuts to global health funding. According to a document obtained by Foreign Policy, funding for global health programs would total $6.8 billion, a cut of $1.7 billion (-20%) below the FY16 level ($8.5 billion).[i] While funding amounts for most program areas was not specified and total U.S. government global health funding[ii] is not yet known, some global health funding amounts are specified in the document (it is important to note that this is a draft proposal and the final request may differ):

State Department – bilateral HIV funding (PEPFAR) & Global Fund, UNAIDS: Of the $6.8 billion in total global health funding, $5.0 billion would be provided through the State Department, a decrease of $0.7 billion (-12%) below the FY16 level ($5.7 billion) and would be the lowest level of funding since FY08 ($4.7 billion). This includes the majority of U.S. bilateral support for HIV provided through the President’s Emergency Plan for AIDS Relief (PEPFAR) as well as contributions to the Global Fund to Fight AIDS, Tuberculosis and Malaria (Global Fund) and UNAIDS as follows:

USAID Global Health Programs: Of the $6.8 billion in total global health funding, $1.8 billion would be provided through USAID, a decrease of approximately $1.0 billion (-36%) below the FY16 level ($2.8 billion) and would be a return to the FY08 funding level ($1.8 billion). This funding is used to support activities addressing HIV (though most HIV funding is provided through the State Department), tuberculosis, malaria, maternal and child health (MCH), nutrition, vulnerable children, family planning and reproductive health (FP/RH), neglected tropical diseases (NTDs), and global health security. While specific amounts for all areas were not provided, the document does specify that funding for NTDs would be $75 million, a decrease of $25 million (-25%) below the FY16 level ($100 million), and funding for global health security would remain flat ($72.5 million). Funding for MDR Financing (multi-drug resistance) would decline while funding for blind children, iodine deficiency disorder, and new partners fund would be eliminated. 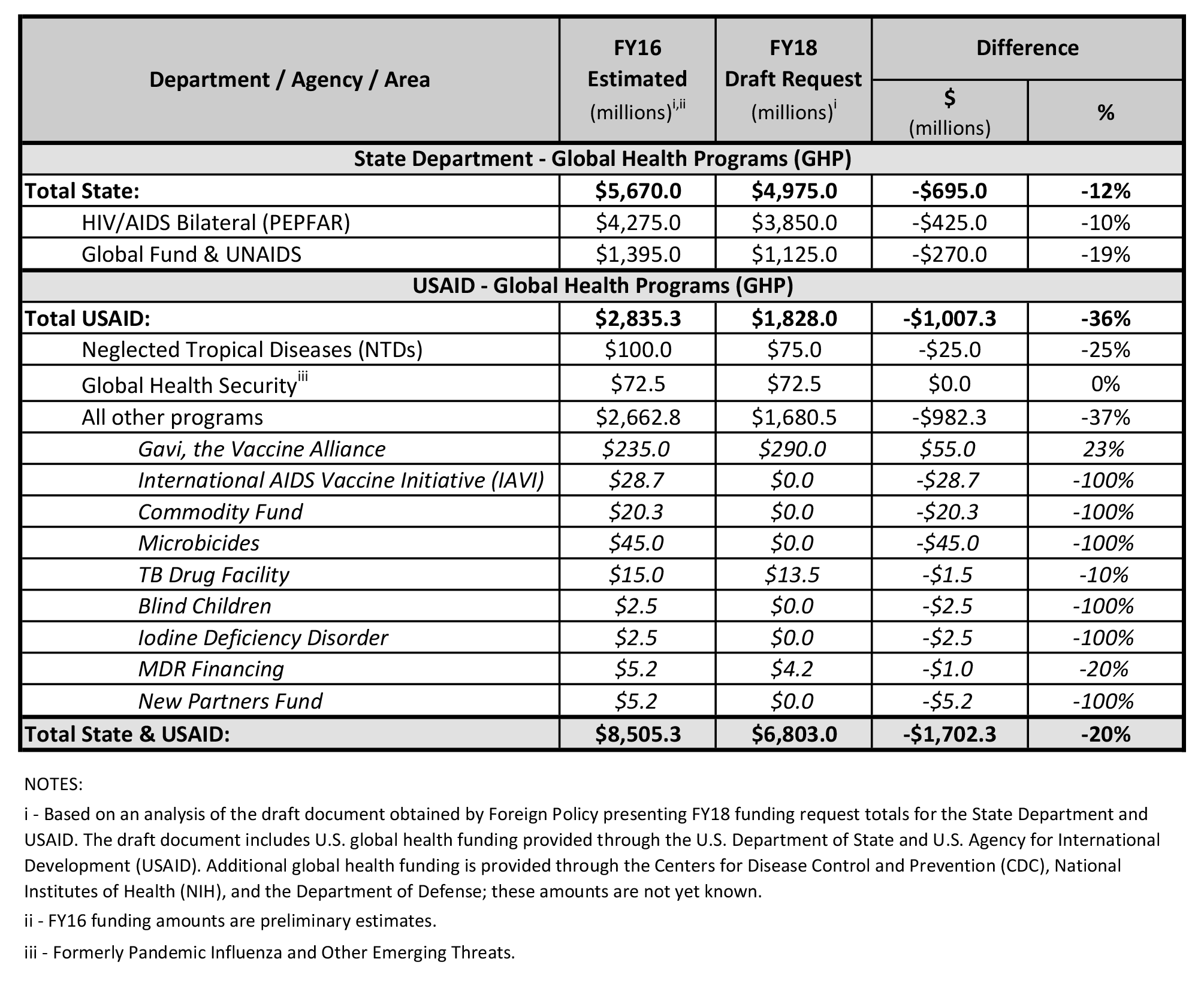 [i] FY17 funding is not yet finalized and is currently operating under a continuing resolution (CR) at approximately the same level as FY16.

[ii] The draft document obtained by Foreign Policy presents U.S. funding for global health provided through the U.S. Department of State and U.S. Agency for International Development (USAID). Additional global health funding is provided through the Centers for Disease Control and Prevention (CDC), National Institutes of Health (NIH), and the Department of Defense; these amounts are not yet known.