Congress released the FY 2015 Omnibus bill (H.R. 83) on December 9, 2014, which includes funding for U.S. global health programs at the U.S. Agency for International Development (USAID), the Department of State, and the Centers for Disease Control and Prevention (CDC), as well as agency-wide emergency funding to address the Ebola crisis. Excluding the emergency Ebola funding, total known* funding for U.S. global health programs in the FY 2015 Omnibus is $9.1 billion, which is essentially flat compared to FY 2014, but is $353 million (4%) above the President’s FY 2015 Budget Request. The tables below compare U.S. global health funding in the FY 2015 Omnibus to final FY 2014 funding amounts (as specified on ForeignAssistance.gov, Agency operating plans, and in the “Consolidated Appropriations Act, 2014” and the President’s FY 2015 Budget Request). An additional table provides a summary of emergency funding for Ebola.

It is important to note that policy provisions such as the Global Gag Rule (Mexico City Policy) and a prohibition on funding for the United Nations Population Fund (UNFPA) that were included in the House version of the FY 2015 State and Foreign Operations (SFOPs) appropriation bill (H.R. 5013) were not included in the FY 2015 Omnibus.

*Some funding amounts (e.g. NIH funding for international HIV research) are determined at the agency level, and are not earmarked by Congress in the Omnibus bill. 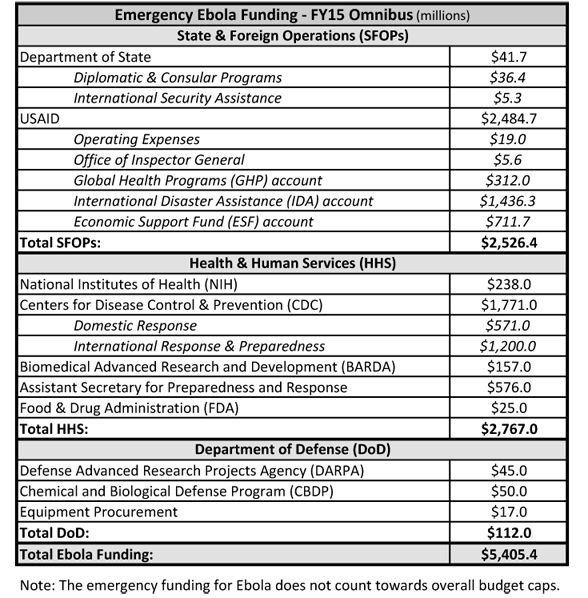