As policymakers in Washington scrutinize the rising cost of the EpiPen auto-injector, a new analysis from the Kaiser Family Foundation shows that Medicare Part D spending for the potentially life-saving device increased by more than 1000 percent between 2007, the year after the Part D drug benefit took effect, and 2014, the most recent year for which data are available. The higher spending partly results from more Part D enrollees using EpiPens during that period, but is primarily driven by a five-fold increase in average Medicare per-prescription spending on the EpiPen, up from $71 in 2007 to $344 in 2014. The analysis illustrates that rising prices for the EpiPen affect public programs and taxpayers, as well as consumers and private insurers. 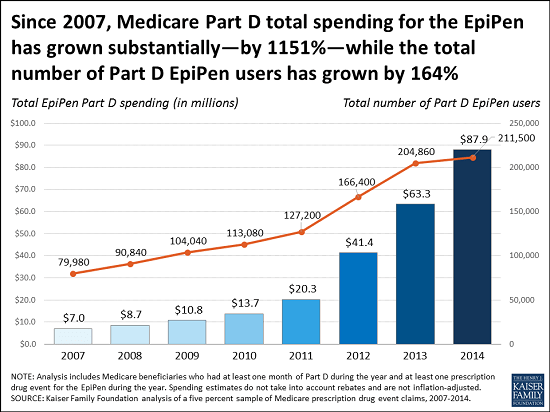 Annual rates of growth for Part D EpiPen spending per prescription were significantly higher each year than growth in average per capita costs for the Medicare drug benefit overall and the growth in medical care prices overall. Total Medicare Part D spending for the EpiPen is based on Medicare claims data, unadjusted for rebates, because drug-specific rebates between manufacturers and plans are not disclosed. The analysis also illustrates the potential effect of rebates using average rebate amounts for all Part D drugs, from the Medicare’s actuaries. The estimates suggest that even if total Part D spending for the EpiPen was lower each year as a result of rebates, we would still expect to see a similar trend in the rate of Medicare Part D spending growth for the EpiPen.