Medicare Part D spending on insulin increased 840 percent between 2007 and 2017, far outpacing growth in the number of beneficiaries using insulin therapy, according to a new KFF analysis.

The findings come at a time when the cost of prescription drugs is a major focus for policymakers in Washington, with rising prices for insulin drawing particular scrutiny, including from members of Congress. 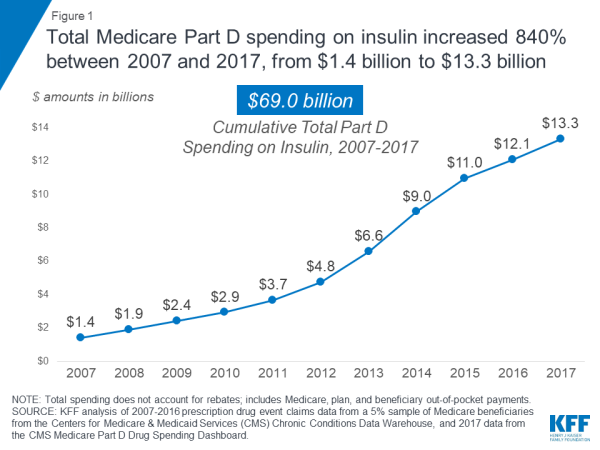 Beneficiaries felt the financial hit, too. Overall out-of-pocket spending among Part D enrollees on insulin quadrupled between 2007 and 2016, from $236 million to $968 million, reflecting both rising prices and more insulin users.

The number of people Medicare covers for insulin therapy has increased as the number of Medicare beneficiaries with diabetes has risen. In 2016, one-third (33%) of all people with Medicare had diabetes, with higher rates among black and Hispanic beneficiaries. From 2007 to 2016, average Medicare total Part D spending per insulin user increased from $862 to $3,949.

The new data note, How Much Does Medicare Spend on Insulin?, examines the cost of insulin for Medicare and beneficiaries enrolled in Medicare Part D plans. It also looks at Part D spending on the top five insulin therapies covered under Part D as well as Part D spending by insulin manufacturer.

Although drug-specific rebate data are proprietary, the analysis uses the average Part D rebate to illustrate the potential effect of rebates on total Part D insulin spending. Manufacturer rebates reduce Medicare spending, but do not lower Part D enrollees’ out-of-pocket costs, which are based on the list price.