A small share of Medicare Advantage enrollees switch plans each year, but those who do tend to pick plans with lower premiums and out-of-pocket limits than the plans they left behind, according to a new analysis by the Kaiser Family Foundation.

Eleven percent of enrollees voluntarily switched from one Medicare Advantage plan to another between 2013 and 2014, the analysis finds, while another four percent were forced to change because their Medicare Advantage plan exited the marketplace. Looked at another way, roughly 8 in 10 enrollees stayed in the same plan from one year to the next – a share that has remained fairly steady since 2007. 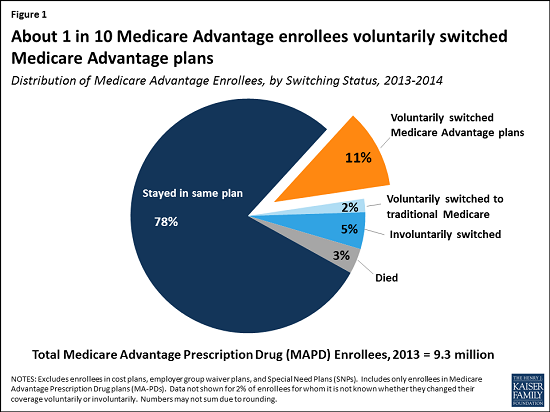 Medicare Advantage enrollees who switch plans reap some benefits by shifting to plans with lower average premiums ($17.51 per month lower, on average) and lower out-of-pocket limits ($401 lower, on average) than they would have paid had they remained in the same plan.

These findings and previous research underscore the importance of tools and support to help beneficiaries choose plans that are most likely to meet their individual needs. Efforts that aim to make it easier for Medicare beneficiaries to evaluate their options could possibly increase competition among plans and improve beneficiaries’ satisfaction with their coverage.