Analysis: Spending on Health Care Would Drop by an Estimated $352 Billion in 2021 if Private Insurance Used Medicare Rates to Reimburse Hospitals and Other Health Care Providers

Total health care spending for people with private health insurance would be an estimated $352 billion lower in 2021 if private insurers used Medicare rates to pay hospitals and other health care providers, rather than the substantially higher rates they currently pay, a new KFF analysis finds.

That would represent a 41 percent decrease from the $859 billion in projected health care spending for people with private insurance this year. The resulting savings would be spread among employers ($194 billion) and employees ($116 billion), and the non-group market ($42 billion), assuming proportional savings throughout the private insurance market. 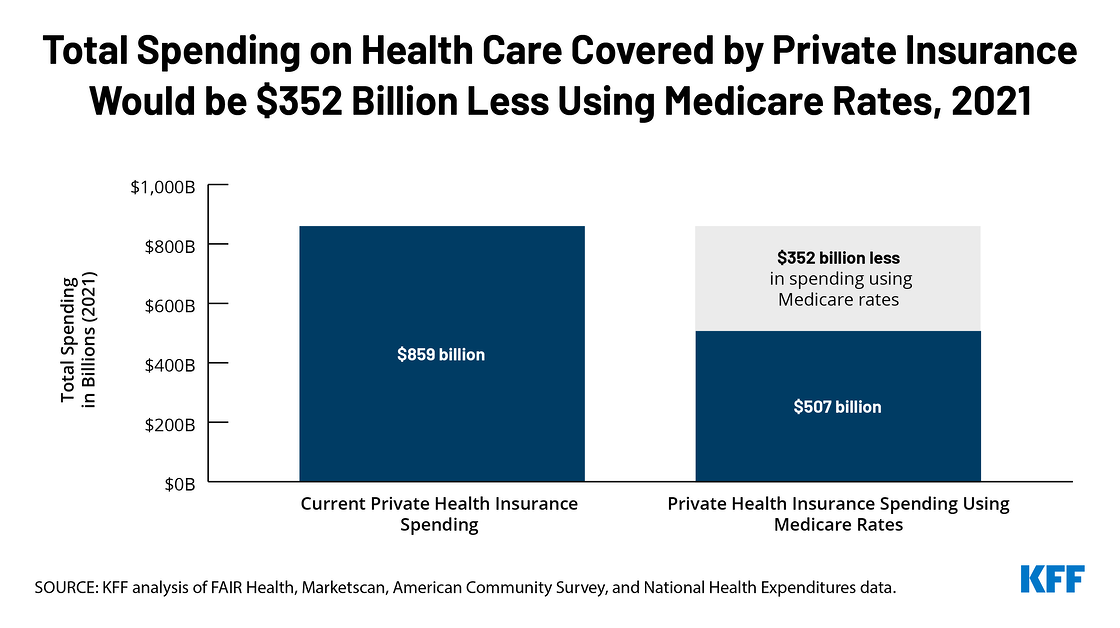 Over the years, federal and state lawmakers have proposed using Medicare rates to rein in health care prices. The new KFF analysis does not examine a particular health reform plan and is not intended to be a forecast, prediction or an endorsement of the policy. Instead, it illustrates how lower payment rates could reduce health spending. Those payment changes could be implemented through a variety of proposals such as Medicare for all, a public option, lowering the age of Medicare eligibility, or all-payer rate-setting. Policies that resulted in private insurance payment rates that were a multiple of Medicare would result in proportionally fewer savings.

The KFF authors note that proposals to limit private insurance reimbursement to Medicare rates could lead to substantial reduction in health care spending, but would undoubtedly be met with fierce opposition from health care providers, since the decrease in spending would translate into a significant drop in their revenues. The analysis does not estimate the likely effects of a change in service utilization (supply or demand) on spending. It also does not estimate the indirect effects on government revenues or spending, or decreases in health-related tax subsidies for employers or individuals that that would offset savings.

For the full analysis, as well as other data and analyses related to health spending and health reform proposals, visit kff.org.