Although a Small Share of Medicare Part D Enrollees Take Specialty Drugs, A New Analysis Finds Those Who Do Can Face Thousands of Dollars in Out-of-Pocket Drug Costs Despite Plan Limits on Catastrophic Expenses

Some Medicare Part D enrollees can expect to pay thousands of dollars out-of-pocket for a single specialty drug in 2016, even though Part D plans provide substantial protection against catastrophic costs, according to a new analysis from the Kaiser Family Foundation. The findings illustrate how high prescription drug prices, one of the public’s top health care concerns, pose a financial challenge not only for Medicare and other federal health programs but for people on Medicare as well.

For 12 specialty drugs used to treat four health conditions —hepatitis C, multiple sclerosis, rheumatoid arthritis, and cancer—Part D beneficiaries face at least $4,000 and as much as nearly $12,000 in out-of-pocket costs in 2016 for one drug alone. In 2014, 2 percent of Part D enrollees used these and other specialty tier drugs, according to the Centers for Medicare and Medicaid Services, though not all will face out-of-pocket costs as high as those identified in the analysis. The analysis by researchers at Georgetown University and the Kaiser Family Foundation also found that a significant share of the out-of-pocket costs for such drugs, defined by Medicare as drugs that cost more than $600 per month, can be incurred even after enrollees’ drug spending reaches the drug benefit’s catastrophic threshold, which is intended to protect against high costs but is not an absolute limit on out-of-pocket spending. 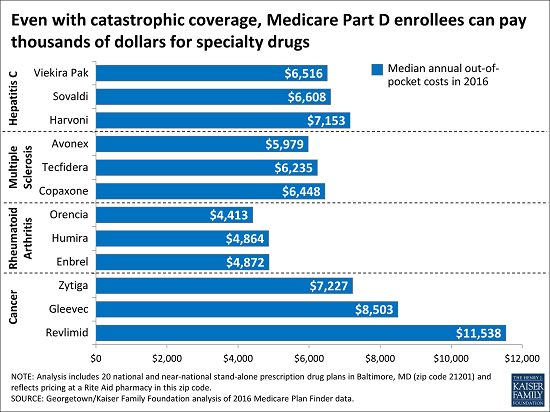 Out-of-pocket costs are substantially higher—often ten times higher or more—for specialty drugs when they are not listed on formulary by a Part D plan. Six of the 12 specialty drugs included in the analysis were not on formulary in some plans; that can trigger added costs of $40,000 or more annually.

The full brief, It Pays to Shop: Variation in Out-of-Pocket Costs for Medicare Part D Enrollees in 2016, also shows how monthly out-of-pocket costs for commonly used brand and generic drugs can vary widely across plans, even when included on plan formularies. For five of ten top brands, monthly costs vary by as much as $100 across plans. The findings underscore why it is important for beneficiaries to compare plans during Medicare’s open enrollment season, which runs from Oct. 15 to Dec. 7, to choose a plan that best meets their needs.

For the full analysis, as well as other data and information about Medicare, visit kff.org.