With less than a week remaining for beneficiaries to make their selections, shopping around among plans is important, since plans can vary significantly and change from year to year, which can have a large impact on enrollees’ coverage and costs. 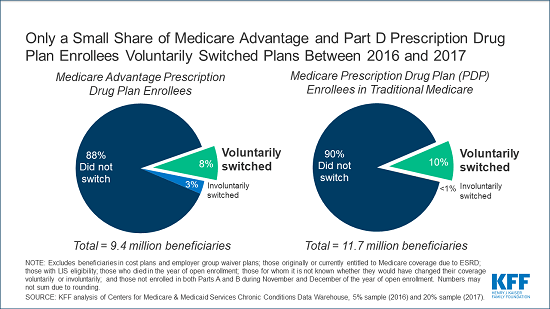 The data reflect a longstanding pattern where a substantial majority of Medicare’s private plan enrollees don’t choose to switch plans in any given year. During each of the open enrollment periods between 2007 and 2016, the share of enrollees without low-income subsidies voluntarily switching plans for the coming year ranged between 6 and 11 percent for people in Medicare Advantage drug plans, and between 10 and 13 percent among those in stand-alone drug plans.

According to an analysis of data from the Centers for Medicare & Medicaid Services (CMS), one-third of Medicare beneficiaries living in the community said it was very difficult or somewhat difficult to compare Medicare options in 2017, while nearly half said they rarely or never review or compare their Medicare options.

CMS encourages beneficiaries to shop around for plans each year to potentially save money or get new benefits. This is valuable advice, because private plans can vary significantly in premiums, deductibles and other cost sharing, provider and pharmacy networks, and drugs covered, among other features.