Over the past several years, policymakers have considered a variety of proposals to discourage or prohibit people on Medicare from purchasing first-dollar supplemental insurance, often in the context of deficit and debt reduction efforts. 1   On March 26, 2015, the House of Representatives passed H.R. 2, the Medicare Access and CHIP Reauthorization Act of 2015, which would replace the Sustainable Growth Rate (SGR) formula, among other changes; the bill is currently pending in the U.S. Senate.  H.R. 2 includes a provision that would prohibit Medicare supplemental insurance (Medigap) policies from covering the Part B deductible for people who become eligible for Medicare on or after January 1, 2020.2  This provision is designed to make future Medigap purchasers more price-sensitive when it comes to medical care, which could lead to a reduction in the use of health services and Medicare spending.  The Congressional Budget Office (CBO) has estimated that the Medigap provision in H.R.2 would reduce federal spending by about $400 million between 2020 and 2025.3

To help cover Medicare’s cost-sharing requirements, most people on Medicare have some source of coverage that supplements Medicare, including Medigap policies (23%), employer or union-sponsored retiree health plans (35%), and Medicaid for individuals with low-incomes (19%).4  The two most popular Medigap policies are plans C and F, which are the only standard Medigap plans that cover the Part B deductible.  In addition, a growing share of Medicare beneficiaries are covered under Medicare Advantage plans (about 30%), which often provide first-dollar coverage.  H.R. 2 would restrict first-dollar coverage for Medigap policies, but not other sources of supplemental coverage, such as retiree health plans or Medicare Advantage.

This data note looks at the number and share of “new” Medicare beneficiaries who would be affected by the Medigap provision in H.R. 2, if it had been implemented in 2010, using the most current data sources available, and examines trends in Medigap enrollment among new beneficiaries since 2000.5 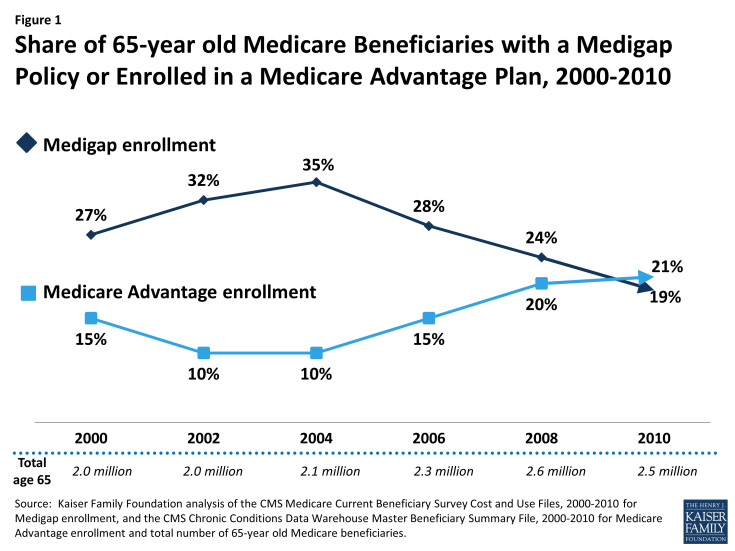 Figure 1: Share of 65-year old Medicare Beneficiaries with a Medigap Policy or Enrolled in a Medicare Advantage Plan, 2000-2010

The Medigap provision in H.R. 2, as passed by the House of Representatives, would prohibit beneficiaries eligible for Medicare in 2020 or later years from purchasing a Medigap policy that covers the Part B deductible. If this policy had been implemented in 2010, it would have affected Medigap coverage for roughly 10 percent of all 65-year old Medicare beneficiaries.  Based on declining Medigap enrollment trends among 65-year olds, a smaller share of new Medicare beneficiaries can be expected to be affected by this policy in the future.

Restrictions on first-dollar supplemental coverage could make Medigap a more attractive option for beneficiaries if insurers reduce Medigap premiums because the plans cover a smaller share of claims.9  Another possibility is that the absence of first-dollar Part B coverage could make Medigap somewhat less attractive, and create an incentive for newly eligible beneficiaries to enroll in a Medicare Advantage plan instead.  However, Medigap plans with restrictions on first-dollar coverage could remain an appealing option for other reasons. For example, Medigap insurers generally coordinate payments to providers and minimize the paperwork burden of medical claims for beneficiaries.  Medigap policies also help to shield beneficiaries from sudden, out-of-pocket costs resulting from an unpredictable medical event and allow beneficiaries to more accurately budget their health care expenses.

The effects for Medicare beneficiaries who choose to purchase a Medigap policy without first-dollar Part B deductible could be expected to vary from one person to the next.  For some, the Part B deductible (projected to be $185 in 2020)11 may not pose much of a barrier to care, but for others, particularly those with relatively low incomes, restrictions on first-dollar coverage could lead them to forgo both unnecessary and necessary services, potentially resulting in the use of more high-cost, acute care services down the road. If the Medigap provision in H.R. 2 becomes law, then tracking its effects on beneficiaries’ coverage decisions and use of services could provide insights into the possible effects of other policies that have been proposed to further restrict first-dollar coverage and raise cost-sharing requirements.