Several States Are Seeking to Restrict Medicaid Eligibility through Waivers

Medicaid enrollment growth slowed to 2.7 percent in state fiscal year 2017, down from 3.9 percent the prior year and far off the peak of 13.2 percent in 2015 that followed implementation of the Affordable Care Act’s (ACA) Medicaid expansion, according to a new survey from the Kaiser Family Foundation. Findings of Kaiser’s 17th annual 50-state survey of Medicaid directors across the country suggest the slowdown in enrollment growth may be attributable to the tapering of new ACA-related Medicaid enrollment, a stable economy, and states’ processing of delayed eligibility redeterminations. 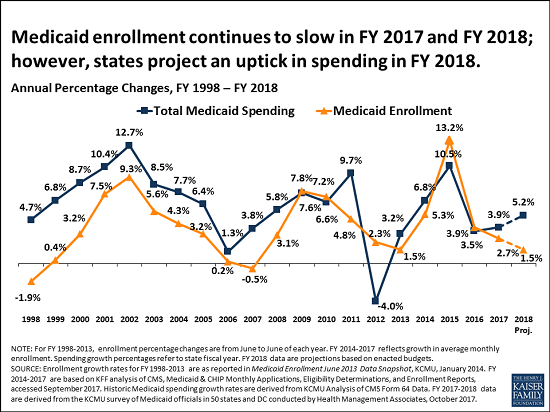 State Medicaid spending grew by 3.5 percent in state FY 2017 and states project it will grow by 6 percent in state FY 2018, in part because the 32 expansion states are now paying a share of ACA Medicaid expansion costs after several years in which the federal government footed the entire bill. The Medicaid expansion states began paying 5 percent of expansion costs in January 2017, midway through state FY 2017. State FY 2018 is the first full budget year that states will have to cover some expansion costs, with states’ share rising to 6 percent in January. In addition, some states are experiencing a decrease in the formula-driven federal match rate for the traditional Medicaid population that can result in faster state spending growth.

The survey findings come at a time of uncertainty for Medicaid and state budgets. Forty-eight states assumed continuation of federal Children’s Health Insurance Program (CHIP) funding in their state FY 2018 budgets; that money expired in September and 11 states report they will exhaust federal funding by the end of 2017 if Congress does not reauthorize it. Nearly two-thirds of states also did not budget for reductions in Medicaid disproportionate share (DSH) payments. Congress had delayed those cuts, originally scheduled for federal FY 2014, to October 2017.  States were busy preparing estimates of the effects of repeal and replace legislation and many assumed that Congress would act to reauthorize CHIP and potentially delay DSH reductions further into the future.

In an emerging trend, several states are seeking approval to implement Medicaid eligibility restrictions through pending Section 1115 waivers. Proposed restrictions include work requirements (AR, IN, KY, ME, UT, WI); time limits on coverage (ME, UT, WI); eliminating retroactive eligibility (AR, IA, ME, UT); ending Medicaid expansion coverage for people with incomes above the poverty level while maintaining the enhanced federal matching rate for the remaining expansion population (AR, MA); and drug screening and testing (WI). Although these waivers are pending, several states plan to implement some of the proposed restrictions in state FY 2018.

As public concern rises about opioid addiction and overdose deaths, more state Medicaid programs are adopting Centers for Disease Control guidelines for the prescribing of opioids, and nearly all have various fee-for-service pharmacy management strategies targeted at opioid harm reduction. Forty-six states reported that naloxone, an opioid overdose antidote, was available without prior authorization.

These and other findings from the 50-state survey, conducted by analysts at the Foundation and Health Management Associates, were discussed today at a briefing held jointly by the Foundation and the National Association of Medicaid Directors (NAMD). The following new reports are available: