Following several years of declining or flat enrollment growth, states expect Medicaid enrollment and spending each to jump by more than 8 percent in fiscal year 2021, chiefly due to a slumping economy amid the pandemic and federal conditions to maintain coverage to access enhanced federal matching funds, according to a new KFF Medicaid budget survey.

The 20th annual survey of state Medicaid directors finds that enrollment is expected to grow by 8.2 percent and combined federal and state Medicaid spending expected to increase by 8.4 percent in the next fiscal year, reflecting a dramatic reversal in economic conditions and state fiscal outlooks. This follows total Medicaid spending growth of 6.3 percent for fiscal 2020, a year in which enrollment remained basically flat.

The findings paint a picture of a Medicaid program that state officials expect increasingly will be relied upon to provide health coverage and help soften the economic blow of the coronavirus pandemic for low-income people – all at a time when state governments’ financial capacity to provide such services is stretched thin. 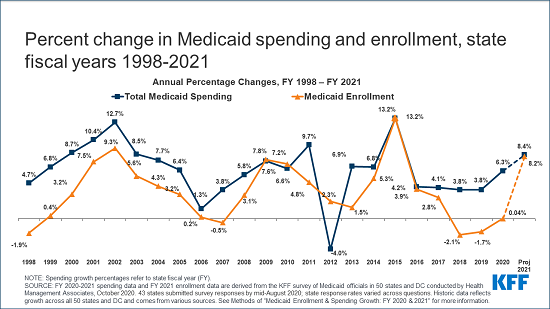 To help provide fiscal relief, Congress earlier this year authorized a 6.2 percentage point increase in the federal Medicaid match rate (FMAP) as part of the Families First Coronavirus Response Act (FFCRA). To be eligible for the funds, states cannot tighten Medicaid eligibility standards or raise premiums beyond policies in place as of January 1, 2020 and must provide continuous eligibility for enrollees through the public emergency period. The FMAP increase does not apply to the Affordable Care Act’s expansion group, for which the federal government already pays 90 percent of costs.

Nearly all states indicated that they are using the extra federal money to help pay costs related to rising Medicaid enrollment and to help close Medicaid or general budget shortfalls. About two-thirds of reporting states said the fiscal relief is also being used to mitigate provider rate and/or benefit cuts.

While expected state spending on Medicaid is crucial to state budgets, the projections in this year’s survey do not provide a clear picture because enhanced federal funding is now slated to expire at the end of March 2021 based on the recent renewal of the Public Health Emergency (PHE), later than states had generally assumed. At the time of the survey, states estimated that state Medicaid spending would decline in FY 2020 (-0.5%) and then sharply increase in FY 2021 (12.2%) with most states assuming that the enhanced matching funds would expire by December 2020.

Nearly all states report significant adverse economic and state budgetary impacts driven by the pandemic, as well as uncertainty about the future. Even with the extension of the enhanced FMAP, those funds are unlikely to fully offset state revenue declines and fully address state revenue budget shortfalls that range from 1 percent to up to 30 percent for FY 2021 according to the National Conference of State Legislatures.

The annual budget survey, conducted with Health Management Associates, provides an in-depth, state-specific examination of changes and initiatives taking place in Medicaid programs. This year, many involve the response to the COVID-19 pandemic. Notable findings include:

The survey findings are presented in two reports: