Nearly a Third of Medicaid Adults Say They Never Use a Computer, Potentially Putting Coverage at Risk in States Requiring Online Reporting

Among enrollees targeted in the push for work requirements for “able-bodied adults” in Medicaid, only 6 percent are not already working and unlikely to qualify for an exemption, according to an analysis from the Kaiser Family Foundation.

Nationally, more than 6 in 10 nonelderly adults in Medicaid who do not receive federal disability or Medicare coverage are already working full-time (43%) or part-time (19%), the analysis finds. Nearly a third of nonelderly adults in Medicaid who don’t receive disability payments report that they are in fair or poor health or are not working due to illness or disability (15%), or are not working because they are caregiving (11%) or in school (6%). All are reasons that could exempt them from work requirements. That leaves six percent who would have to get a job or participate in training or volunteer activities to meet the new rules being pursued in some states. 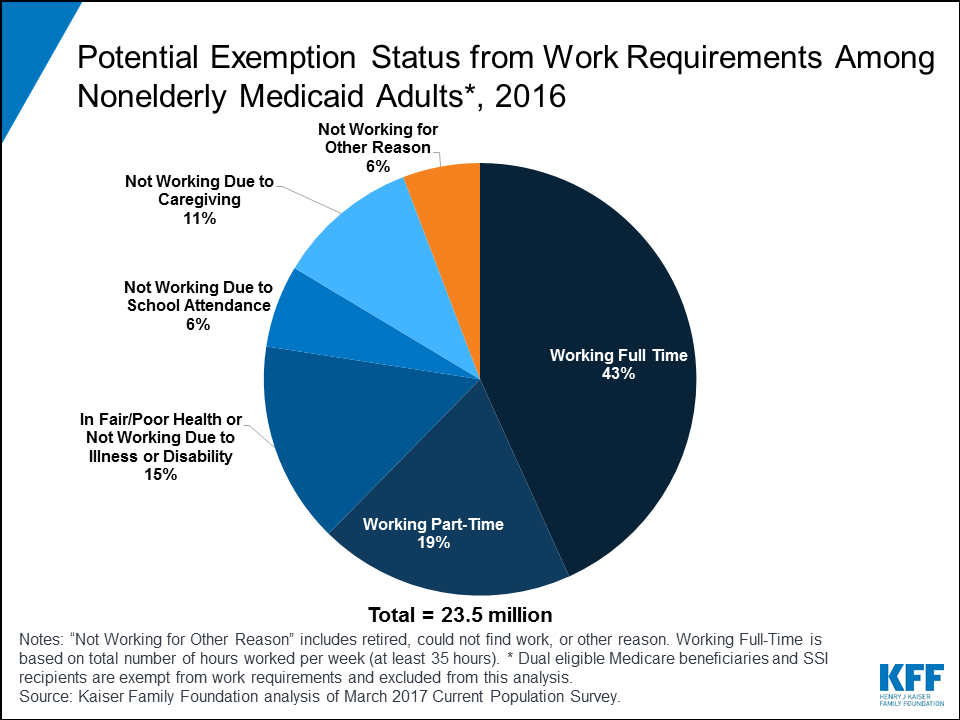 Among the majority who are already working, as well as among those who may qualify for an exemption, many could face administrative hurdles in documenting their status to maintain Medicaid coverage, the analysis finds. For example, while 3 in 10 Medicaid adults nationally say they never use a computer, Arkansas – which this month became the first state to implement work requirements – is requiring enrollees to use online accounts to verify work status.

How work requirements will be implemented and whom they affect are key issues as nearly a dozen states have approved or pending federal waivers to add such requirements in their Medicaid programs, and other states are considering similar proposals.The latest is Virginia, where work requirements were central to a compromise to adopt the Affordable Care Act’s Medicaid expansion.

The new analysis examines who works in Medicaid and what types of jobs they hold, the relationship between work and financial stability for them and the potential challenges in fulfilling work requirements or navigating the exemption process.