As All States Streamline Medicaid Enrollment and Renewal Processes, New Eligibility Requirements Pursued By Some States Could Increase Administrative Complexity and Reduce Coverage

All states continue to implement new Medicaid enrollment and renewal processes that can connect individuals to coverage more quickly and reduce administrative paperwork, finds KFF’s annual 50-state survey of Medicaid eligibility and enrollment policies. At the same time, some states are pursuing new eligibility requirements, such as work requirements and monthly premiums, that would push in the opposite direction, increasing the complexity of enrollment processes and potentially reducing coverage.

The ongoing technological and enrollment process upgrades required of all states under the Affordable Care Act mean that this year, for the first time, individuals can apply online for Medicaid in all states, the survey finds. Moreover, 46 states can complete Medicaid eligibility determinations within 24 hours, and 46 can perform automated renewals.

While all states have streamlined enrollment and renewal processes, not all states have expanded coverage to adults under the ACA. In the 14 states that had not adopted the Medicaid expansion, eligibility for parents and other adults remained very limited. The median eligibility level for parents in these states was 40 percent of poverty ($8,532 per year for a family of three). In Texas, eligibility is limited to 17 percent of the federal poverty level or less than $4,000 per year for a parent in a family of three. Other adults were ineligible regardless of income in all these states except Wisconsin. 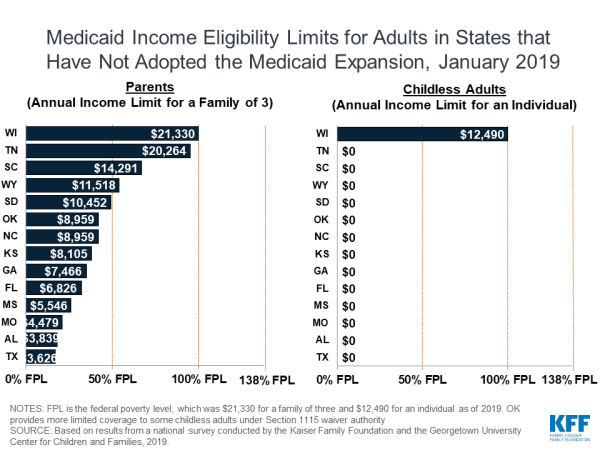 medeparately, some states are seeking and implementing new eligibility rules, often through waivers. Such measures include imposing work requirements, mandatory health risk assessments, charging monthly premiums, eliminating retroactive eligibility, delaying coverage until the first premium payment and locking enrollees out of coverage if they fail to pay premiums or renew their eligibility on time. Many of these measures require complex and costly documentation and administrative efforts, which can raise barriers to coverage and contribute to coverage losses, in contrast to the push for increased coverage and streamlined enrollment processes under the ACA.

The 17th annual survey provides a comprehensive look at Medicaid and CHIP eligibility, enrollment, renewal, premium and cost sharing policies for each state as of January 2019. These annual surveys will continue to track future policy changes.

The full survey, Medicaid and CHIP Eligibility, Enrollment, Renewal, and Cost Sharing Policies as of January 2019: Findings from a 50-State Survey, conducted with Georgetown University’s Center for Children and Families, as well as reports from previous years, can be found on KFF.org.