Analysis Finds that Medications for Hepatitis C and HIV/AIDS Are the Costliest Group of Outpatient Prescription Drugs for Medicaid, While Diabetes Drugs Have Posted the Sharpest Rise in Costs

Antiviral medications, including those that treat hepatitis C and HIV/AIDS, cost the Medicaid program more money (before rebates) than any other group of outpatient prescription drugs for each year from 2014 to 2017, according to a new KFF analysis.

The analysis of utilization and spending trends finds that antivirals accounted for more than 13 percent of the $63.6 billion in Medicaid outpatient drug spending pre-rebates in 2017 — a level disproportionate to their utilization and a reflection of the high cost of these drugs. Drugs for diabetes were the second most costly group that year, accounting for 10 percent of Medicaid outpatient drug spending before rebates. Spending for diabetes drugs rose faster than for any other group, nearly doubling from 2014 to 2017 — largely due to the rising price of insulin. 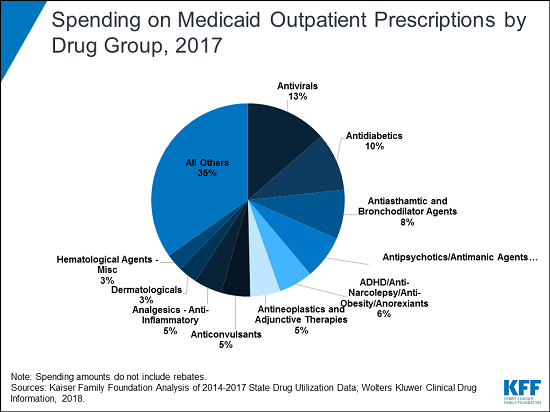 Although outpatient  drugs account for a small share of all Medicaid spending (6%, net of rebates), spending on this service is expected to grow faster than most other Medicaid services in the next decade, prompting policymakers at the national and state levels to explore new ways to curb such costs.

Over the recent  four-year period, and with implementation of Medicaid expansion in many states, outpatient drug utilization in Medicaid increased 21 percent, from 621.7 million prescriptions in 2014 to 752.9 million prescriptions in 2017.  The ten most frequently prescribed drug groups were the same every year, although the order changed. Antidepressants, asthma drugs and opioids (including medications used to treat addiction) nearly always ranked in the top three.

Amid an ongoing national fight against the opioid epidemic, the number of opioid prescriptions was lower in 2017 than in 2014. A greater share in 2017 were for buprenorphine, a medication used to treat opioid addiction as well as pain, the analysis finds.

In return for Medicaid coverage of their products, manufacturers must enter into a rebate agreement with the Secretary of the Department of Health and Human Services. Manufacturers pay these statutory rebates quarterly to states, who share the savings with the federal government. States also may negotiate supplemental rebates with manufacturers.