A stronger economy was a primary factor driving lower Medicaid enrollment growth and relatively steady spending growth as states finished state fiscal year (FY) 2018 and adopted budgets for FY 2019. This brief analyzes Medicaid enrollment and spending trends for FY 2018 and FY 2019 based on interviews and data provided by state Medicaid directors as part of the 18th annual survey of Medicaid directors in all 50 states and the District of Columbia. The methodology used to calculate enrollment and spending growth as well as additional information about Medicaid financing can be found at the end of the brief. Key findings are described below and in a companion report.

Enrollment: A stronger economy, elimination of redetermination delays in states that had previously implemented new or upgraded eligibility systems, and enhanced verifications and data matching in a number of states resulted in flat enrollment growth in FY 2018 (-0.6%) and projected for FY 2019 (0.9%) (Figure 1). Since peaking in FY 2015, enrollment growth has continued to slow due, in part, to the tapering of ACA enrollment growth. 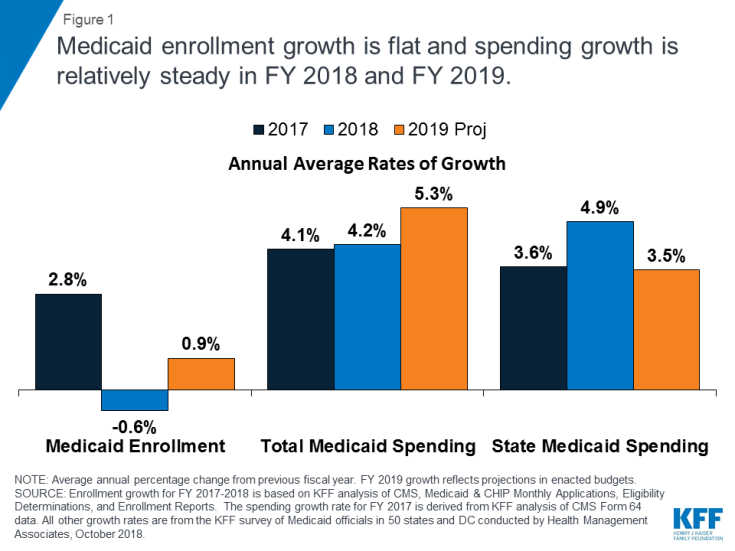 Figure 1: Medicaid enrollment growth is flat and spending growth is relatively steady in FY 2018 and FY 2019.

ACA Expansion Financing: After receiving a 100% federal match rate for the expansion group for CYs 2014-2016, states began paying 5% of the costs of the Affordable Care Act (ACA) Medicaid expansion group starting in January 2017 and 6% beginning in January 2018. The declining federal match for the expansion group (which will continue to phase down to 90% by 2020) resulted in state Medicaid spending growth outpacing total spending growth (4.9% compared to 4.2%) in FY 2018, the first full state fiscal year that states were required to pay a share of expansion costs. States anticipate, however, that total spending growth will increase faster than state spending growth for FY 2019. While most states reported financing the state share of expansion costs with general fund dollars, a number of states listed other sources of financing including new or increased provider taxes / fees or savings that accrue from the expansion.

Looking ahead, economic conditions and the outcome of federal and state elections are likely to have implications for Medicaid policymaking as well as for spending and enrollment trends. Potential federal efforts to further change the ACA or cap Medicaid financing as well as state ballot initiatives and other state efforts to adopt the Medicaid expansion are key issues to watch.

Medicaid provided coverage to about one in five Americans, or about 73 million people, as of June 2018.1 Total Medicaid spending was $557 billion in FY 2017 with 62% paid by the federal government and 38% financed by states.2 Medicaid accounts for one in six dollars spent in the health care system, but more than 50% of long-term care spending.3 Key factors affecting total Medicaid spending and enrollment trends over the last decade include the lingering effects of the Great Recession followed by the implementation of the Affordable Care Act (ACA). As of September 2018, 34 states including DC have adopted the ACA Medicaid expansion with Virginia implementation planned for January 1, 2019 and Maine implementation planned for sometime in FY 2019 (the exact date is to be determined).4

As states finished FY 2018, the economy was still improving compared to prior years. The unemployment rate continued to decline to 3.7% in September 2018, relieving pressure on Medicaid enrollment growth.5 Revenue collections were strong in the 4th quarter of 2017 (halfway through FY 2018), increasing by 9.3% over the same quarter in the prior year (Figure 2). This increase was largely due to accelerated state personal income tax and local property tax payments, as individuals sought to take advantage of state and local tax deductions that became subject to a cap beginning in January 2018 (due to the passage of the Tax Cuts and Jobs Act (TCJA) in December 2017).6 Data from the National Association of State Budget Officers (NASBO) show estimated state revenue growth of 4.9% for FY 2018 with collections at or above original budget projections in 39 states, and 5% or greater in 15 states.7 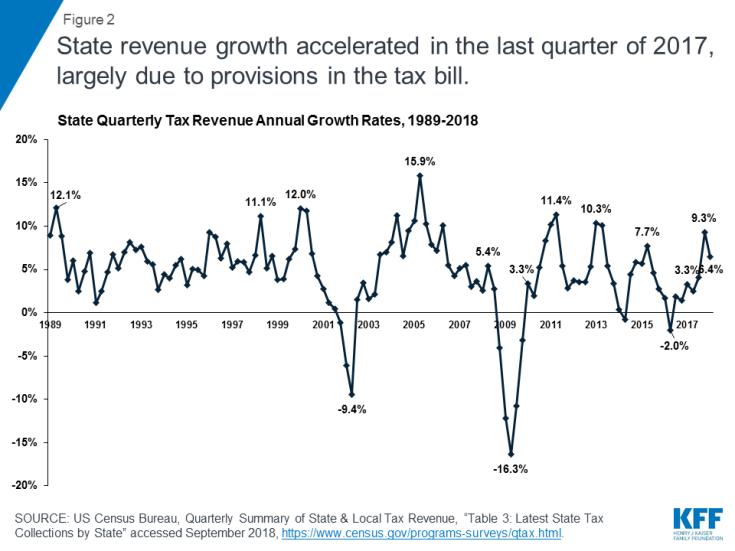 Figure 2: State revenue growth accelerated in the last quarter of 2017, largely due to provisions in the tax bill.

For most states, revenue growth in FY 2019 is expected to be more moderate than in FY 2018. Most enacted budgets reflect moderate growth in both state revenues and spending. While complete data is not available, governors’ proposed budgets for FY 2019, on average, proposed an increase in nominal general fund revenues of 2.1% and spending of 3.2%.8 New spending allocations in adopted budgets for FY 2019 were frequently directed toward elementary and secondary education (including teacher pay). Other key priorities across states included expanding postsecondary educational opportunities, controlling health care costs, addressing infrastructure demands, reforming corrections systems, and focusing on efforts to address the opioid crisis.9 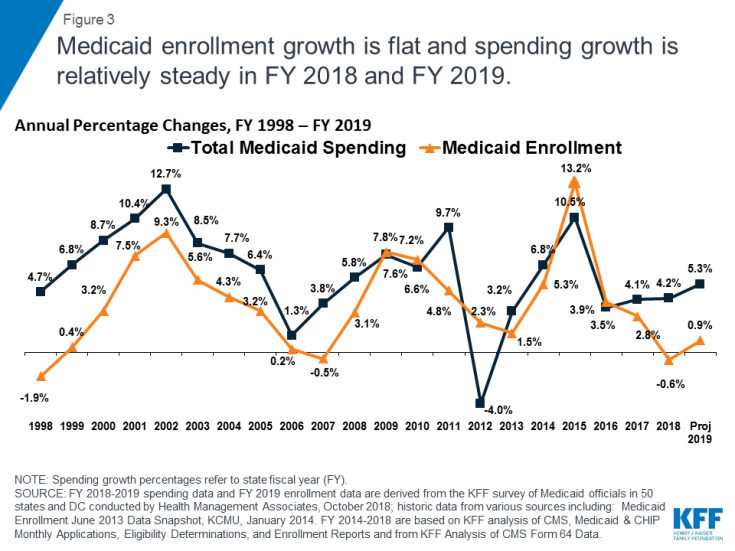 Figure 3: Medicaid enrollment growth is flat and spending growth is relatively steady in FY 2018 and FY 2019.

In addition to the economy and similar to findings reported last year, a number of states that had previously implemented new or upgraded eligibility systems noted that they had eliminated redetermination delays and backlogs, which also contributed to slower, flat, or declining enrollment growth. In addition, some states noted that upgraded systems enabled enhanced verifications of enrollment data that resulted in further downward enrollment pressure. Some states reporting positive enrollment growth noted overall population growth as a factor contributing to upward enrollment growth. About half the states (27 states) reported enrollment declines for FY 2018 and 10 states reported declines for FY 2019.

Relative to other groups, expansion adults had the highest median growth rate in both FY 2018 and FY 2019, followed by the median growth rate for the aged and persons with disabilities. In contrast, many states reported slow or negative growth for children and non-expansion adults in FY 2018 and FY 2019. Lower enrollment growth for children and adults (lower-cost populations) relative to the aged and persons with disabilities (more costly groups) changes the case mix of the overall Medicaid population with implications for spending growth.

Medicaid officials identified increasing costs for prescription drugs (particularly for specialty drugs), long-term services and supports and behavioral health services, and policy decisions to increase payment rates to specific provider groups as factors putting upward pressure on total Medicaid spending. A few states mentioned enrollment growth overall or for particular groups as a spending driver, sometimes citing expansion adults or high cost populations. Other states noted that medical inflation, which trends higher than general inflation, pushes Medicaid spending growth higher than spending growth in other programs. When asked about trends in spending per enrollee, about one in four states reported that per enrollee costs for the aged and persons with disabilities was growing faster than for other groups, potentially amplifying underlying changes in the case mix of the overall Medicaid population. 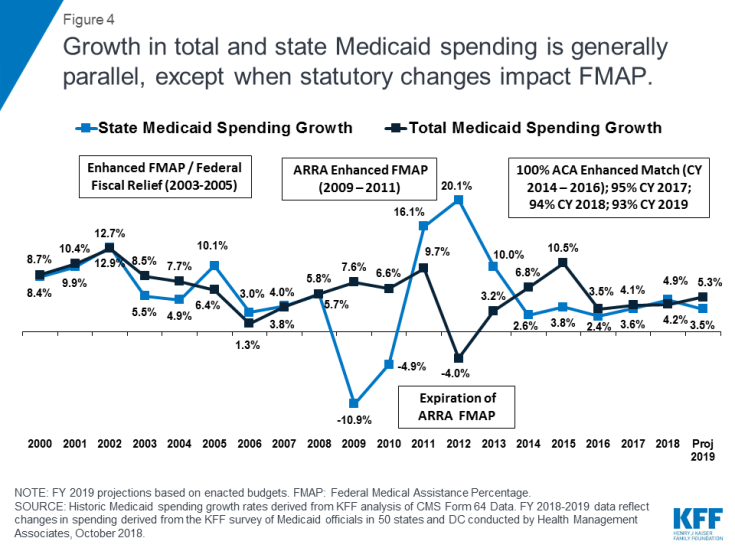 While most states reported financing the state share of expansion costs with general fund dollars, a number of states listed other sources of financing including new or increased provider taxes / fees or savings accrued as a result of the expansion. Some states listed other funding including local government funds in Illinois, cigarette taxes in Indiana, increases in drug rebates in Kentucky, and “other revenue” in New Hampshire. Several expansion states reported multiple sources of financing (Exhibit 1).

States started FY 2019 bolstered by strong revenue growth in FY 2018 and projecting continued revenue and spending growth for FY 2019. A stronger economy contributed to flat enrollment growth, which in turn mitigated Medicaid spending growth. However, rising costs for prescription drugs and long-term services and supports as well as targeted provider rate increases and medical inflation were cited as factors contributing to upward spending growth. Looking ahead, federal and state elections in November 2018 are likely to have important implications for Medicaid. The outcome of federal elections could determine whether Congress takes up legislation to make further changes to the ACA or to reform and cap Medicaid financing. State-level gubernatorial and legislative elections could have implications for states considering Medicaid expansion or Section 1115 demonstration waivers. Thirty-six states have gubernatorial elections this year and three states (Idaho, Nebraska, and Utah) have ballot initiatives to newly adopt the ACA Medicaid expansion. FY 2019 will be a year to watch how Medicaid’s role evolves on the ground in the 50 states and DC.