As of December 2013, nearly 55.4 million individuals were enrolled in Medicaid. Compared to one year earlier, enrollment grew by 1.1 percent – the slowest rate since before the Great Recession. (Figure 1) An additional 585,000 individuals were enrolled in Medicaid programs across the country in December 2013 compared to one year earlier, a fraction of the increases seen at the height of the recession,1 when 4 million additional individuals enrolled over a 12 month period between December 2008 and 2009. This is also the monthly period immediately before the January 2014 implementation of the adult Medicaid expansion. 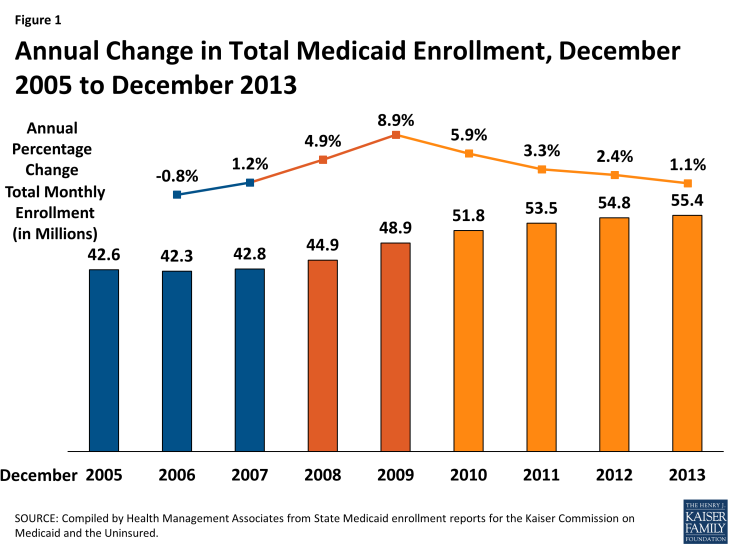 This report focuses on changes in monthly Medicaid enrollment between December 2012 and December 2013. (Appendix Table A-1, which also includes data from our separate CHIP report) This is a long standing report series that collects monthly Medicaid enrollment data for December (and June, not reported here) going back to 2000. While the most recent data included in this report predate preliminary data released by CMS that show the early effects of full implementation of the ACA, this report series is an important source of historical trend data that provides the necessary context to understand these new sources of Medicaid enrollment data. In addition to providing historical trends (Appendix Tables A2-A3), these data also provide more detail about enrollment, such as the distribution of the enrollment among children, adults, or the elderly and people with disabilities, as well as Medicaid enrollment trends for each of these groups (Appendix Tables A4-A6.) While not directly comparable to the enrollment data released by CMS (see methodology for more details) – this report provides helpful context, additional detail and historical trend information not available in the CMS data.

During the period from December 2012 to December 2013, there were a number of factors likely influencing Medicaid enrollment in different directions, most notably:

Early expansion of Medicaid in some states, as well as successful outreach and enrollment efforts for new Marketplaces pushed enrollment up in some states. Implementation of the major coverage provisions of the ACA had begun but had not been completed. Broad outreach efforts to encourage individuals to apply for coverage (through Medicaid, the Marketplaces, or CHIP) were underway by December 2013, and in the past such efforts have put upward pressure on Medicaid enrollment. While the Medicaid expansion was not set to begin until January 2014 (just after this data collection period) states such as California and Colorado, which had elected to expand coverage to childless adults and parents ahead of time saw increased enrollment in these programs, boosting Medicaid enrollment totals. Changes related to the Medicaid coverage expansion in other states and other enrollment effects of the ACA more broadly would start until January 2014, the month following this data.

Problems implementing new enrollment systems for the Federally Facilitated Marketplace (FFM) and State Based Marketplaces (SBM) put downward pressure on Medicaid enrollment growth. States and the Federal Government faced IT systems challenges, particularly early on in the open enrollment period for the Marketplace, which may have applied some downward pressure on Medicaid enrollment during this period. States that relied on FFMs had significant problems with “account transfers” from the FFM to Medicaid. Many individuals were assessed or determined eligible for Medicaid through the FFMs, but because of system problems, accounts could not be easily transferred to effectuate enrollment. There were also some SBMs that faced similar issues. Although problems persist, some progress in resolving these issues was made after the timeframe for this report.

(Appendix Tables A1-A3)
Medicaid enrollment increased slightly to 55.4 million as 585,000 more individuals (on net) were enrolled in Medicaid in December 2013 compared to December 2012. Enrollment growth over the year was lower than previous trends but slowed even further in the second half of this 12 month period (June 2013 to December 2013) as the number of people enrolled increased by only 88,800 compared to an increase of 496,200 enrollees between December 2012 and June 2013. (Figure 2) Nearly all states saw slower enrollment growth between June 2013 and December 2013 than in the prior six month period, but the decline was particularly notable in states not expanding their Medicaid programs; virtually all of these states were also coordinating with the FFM and many faced the IT systems issues noted above. 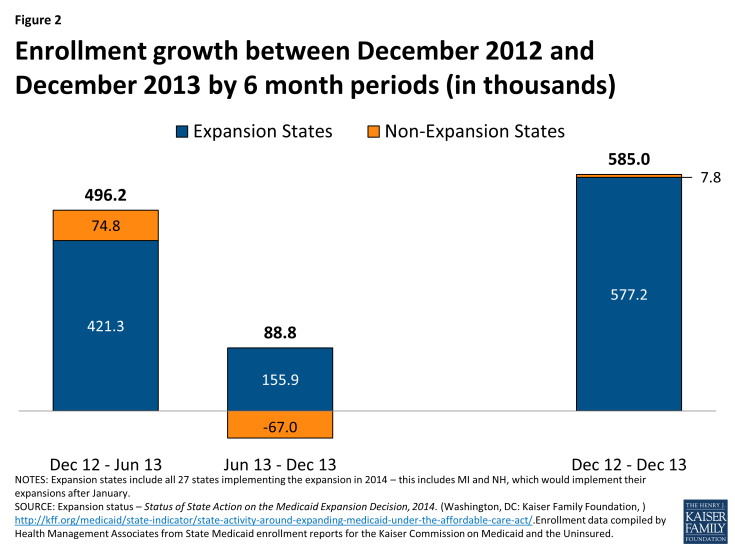 Figure 2: Enrollment growth between December 2012 and December 2013 by 6 month periods (in thousands) 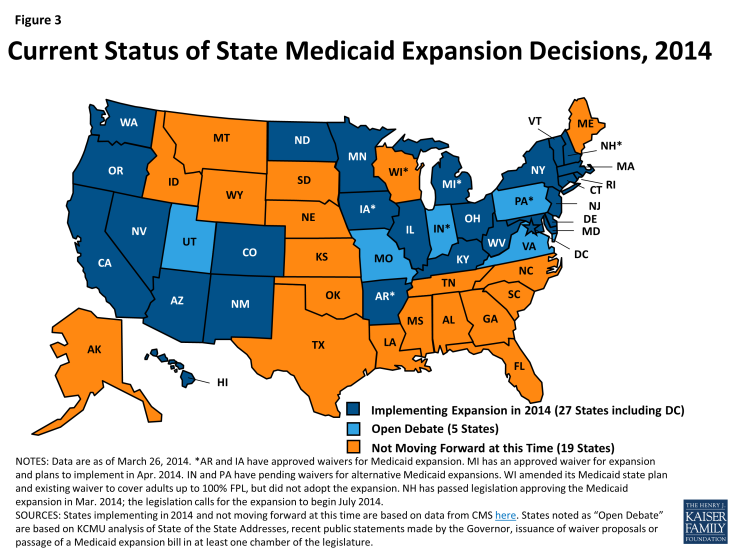 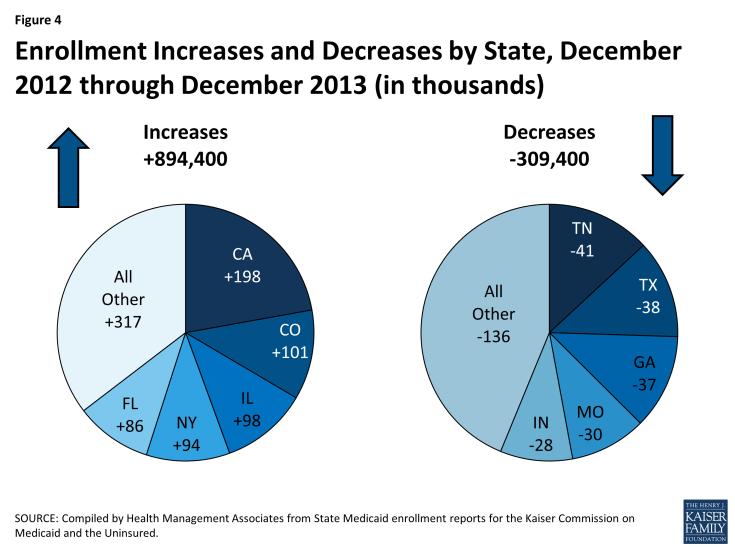 Figure 4: Enrollment Increases and Decreases by State, December 2012 through December 2013 (in thousands) 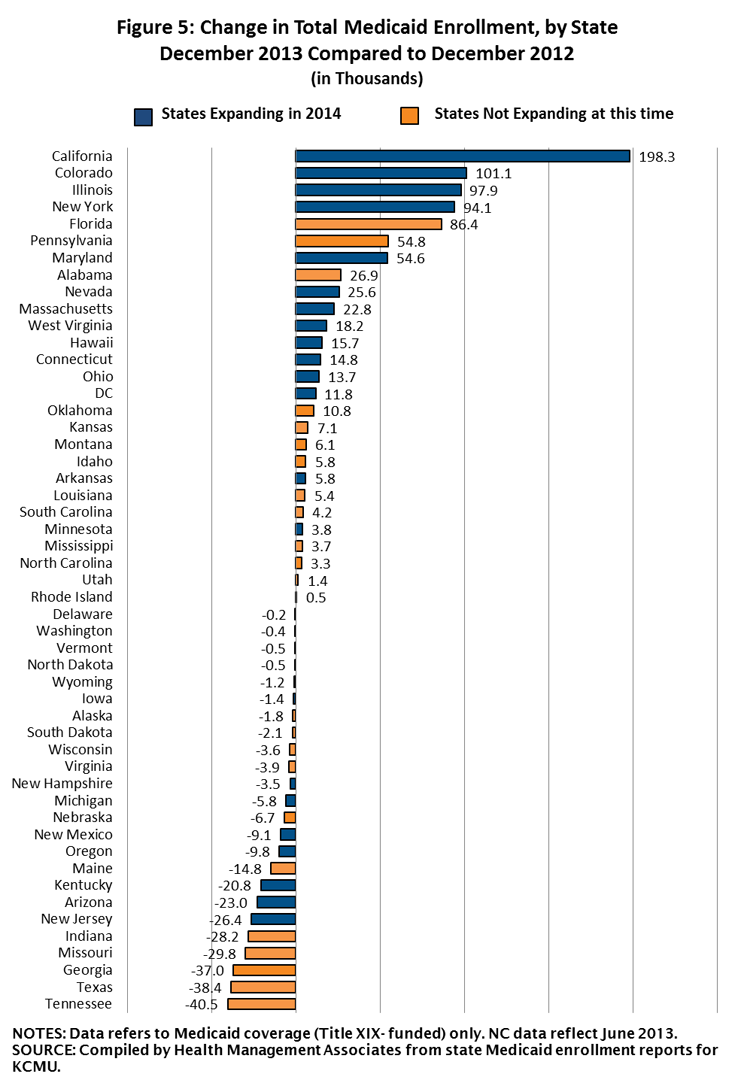 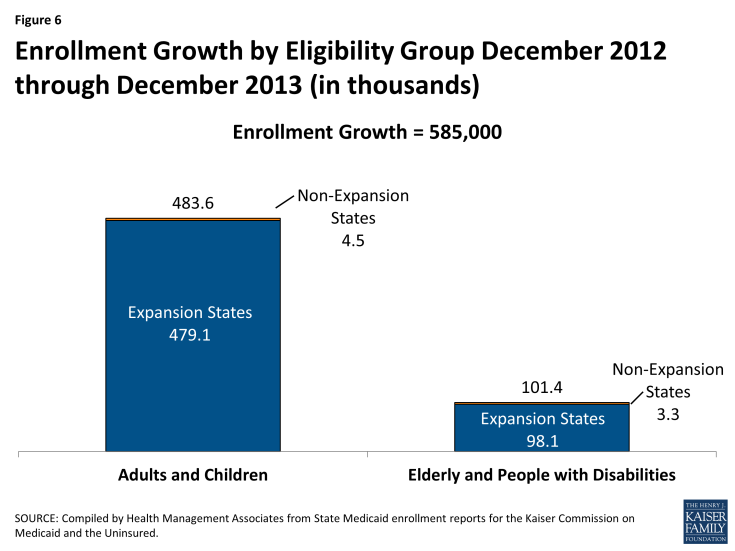 On net, enrollment of adults and children increased by 483,600 between December 2012 and December 2013. This reflects a net increase of 577,900 adults during this period, concentrated in states expanding Medicaid in 2014. States that were driving increases include:

In contrast to adults, Medicaid enrollment of children actually saw a small decline on net during this period as 26 states saw declines in Medicaid enrollment of children (most notably in Illinois, Texas, Michigan, Georgia, and Indiana) while 25 states saw increases (most notably in Colorado, Florida, New York, Alabama and Maryland.) States that are implementing the Medicaid expansion in 2014 experienced relatively flat growth among children whereas states not implementing the Medicaid expansion in 2014 saw a more substantial decline in enrollment of children in Medicaid. Some of these children may have transitioned to CHIP as family income increased; CHIP enrollment grew during this same period by 175,020.9 The decline in Medicaid enrollment of children was concentrated in the second half of the period (June 2013 to December 2013) and in states not expanding Medicaid in 2014 nearly all of which opted to coordinate with the FFM; this may be a reflection of the initial difficulties states and the federal government faced with IT systems and file transfers. A few states, most notably California and Colorado, were in the process of transitioning children from their stand-alone CHIP programs to Medicaid during this period. These children are still funded through Title XXI and therefore are not included in the counts reported here; they are included in the counts reported in a separate companion report on CHIP enrollment.

Enrollment increases among the elderly and people with disabilities contributed to total enrollment growth during this period, but to a lesser extent than in recent years. Medicaid enrollment among the elderly and people with disabilities grew very little in Medicaid programs across the country during this period, as 101,400 more aged and disabled beneficiaries were enrolled in December 2013 than in December 2012 (0.7% growth compared to enrollment growth of 2.7% in the prior annual period.) Overall, enrollment grew in all but 12 states for this group; the largest declines occurred in Pennsylvania, California, Georgia, Tennessee, and Kentucky largely among disabled groups. Over two-thirds of states saw slower growth from June 2013 to December 2013 than in the previous six month period.

However, after a slow rate of growth in 2013, Medicaid enrollment appears to have increased substantially during the beginning of 2014; preliminary data from CMS shows that combined Medicaid and CHIP enrollment grew by at least 4.8 million or 8.2% during the open enrollment period. According to this preliminary data, nearly all of the enrollment growth during this period occurred in states that implemented the Medicaid expansion; these states experienced substantially higher growth in Medicaid enrollment than states that have not expanded (12.9% vs. 2.6%).10 CMS, which is collecting this data as part of efforts to collect a broad set of eligibility and enrollment performance indicators to inform program management and oversight, has indicated that more detailed information on which eligibility groups are driving enrollment in each state is anticipated to be released sometime over the summer.