Implications of the ACA Medicaid Expansion: A Look at the Data and Evidence

More than four years after the implementation of the Medicaid expansion included in the Affordable Care Act, debate and controversy around the implications of the expansion continue. Despite a large body of research that shows that the Medicaid expansion results in gains in coverage, improvements in access and financial security, and economic benefits for states and providers, some argue that the Medicaid expansion has broadened the program beyond its original intent diverting spending from the “truly needy”, offers poor quality and limited access to providers, and has increased state costs. New proposals allow states to implement policies never approved before including conditioning Medicaid eligibility on work or community engagement. New complex requirements run counter to the post-ACA movement of Medicaid integration with other health programs and streamlined enrollment processes. This brief examines evidence of the effects of the Medicaid expansion and some changes being implemented through waivers. Many of the findings on the effects of expansion cited in this brief are drawn from the 202 studies included in our comprehensive literature review that includes additional citations on coverage, access, and economic effects of the Medicaid expansion. Key findings include the following:

Research and data show that Medicaid expansion has resulted in coverage gains without diverting coverage from traditional groups.

Coverage changes: Studies show that Medicaid expansion states experienced significant coverage gains and reductions in uninsured rates compared to non-expansion states for the low-income population broadly (Figure 1).1,2,3 Under the original 1965 Medicaid law, Medicaid eligibility was tied to cash assistance, but over time, Congress has expanded federal minimum requirements and provided broader coverage options for states especially for children, pregnant women, and people with disabilities. The Medicaid expansion in the ACA built on earlier efforts to extend Medicaid coverage to low-income uninsured adults, many of whom are working but lack access to employer or other affordable health coverage.  Studies also show that Medicaid expansion has resulted in coverage gains in a number of vulnerable populations, increased coverage for children as parents have gained coverage, and disproportionately positive coverage impacts in rural areas in expansion states.4,5,6,7,8 Coverage benefits of expansion have occurred across the major racial/ethnic categories.9,10 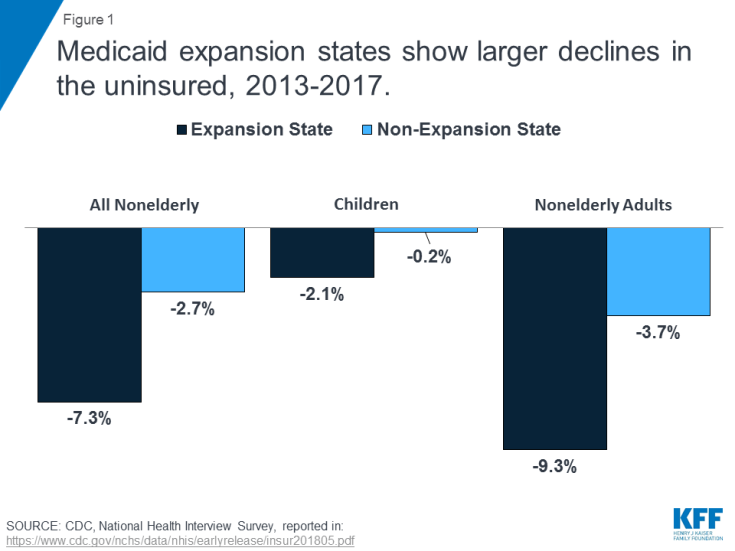 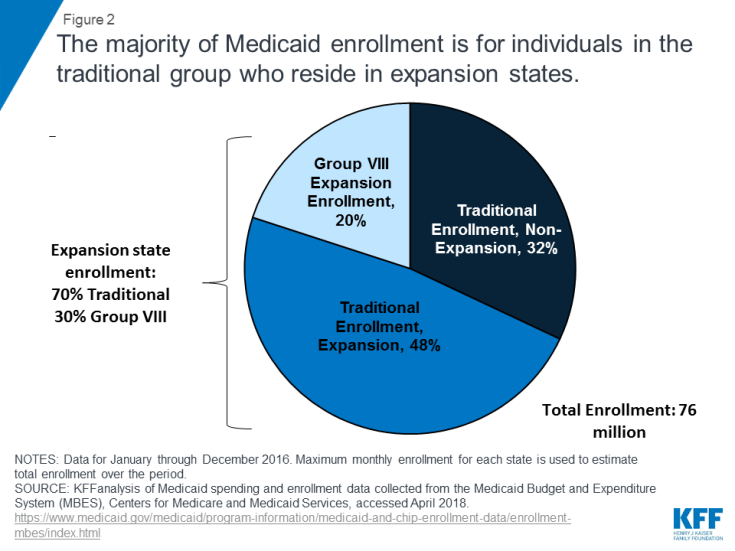 Figure 2: The majority of Medicaid enrollment is for individuals in the traditional group who reside in expansion states. 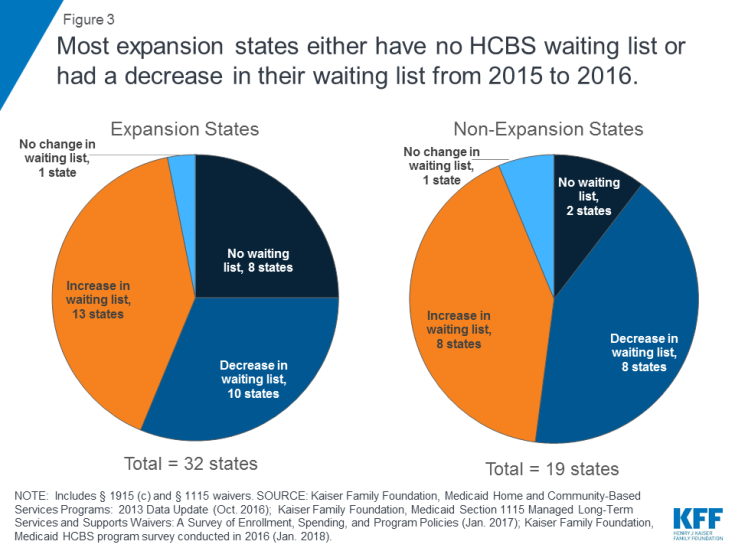 Figure 3: Most expansion states either have no HCBS waiting list or had a decrease in their waiting list from 2015 to 2016.

Research demonstrates that Medicaid expansion has positively affected access to care, utilization of services, the affordability of care, financial security, self-reported health, and certain measures of health outcomes among the low-income population (Figure 4). However, further research is needed to more fully determine effect of expansion on health outcomes given that measureable changes take time to occur. 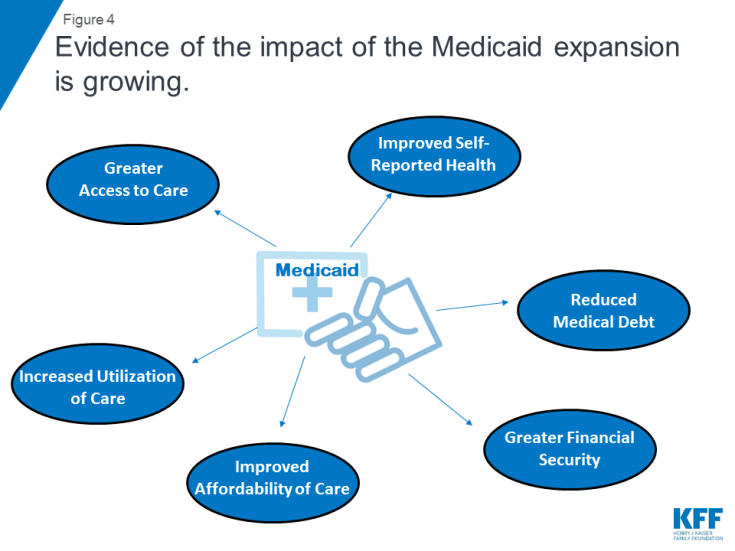 Figure 4: Evidence of the impact of the Medicaid expansion is growing.

Access: A large body of research points to expansion-related improvements across a wide range of measures of access to care and utilization of medications and services. For example, studies find that Medicaid expansion was associated with increases in cancer diagnosis rates (especially early-stage diagnosis rates), improvements in access to medications and services for the treatment of behavioral and mental health conditions, increases in the number of adults receiving consistent care for a chronic condition, and improvements in surgical care.12,13,14,15,16 Findings on expansion’s effect on provider capacity are mixed, with some studies suggesting that provider shortages are a challenge in certain contexts and others suggesting that providers have expanded capacity and are meeting increased demands for care.17,18,19

Affordability: Research examining expansion enrollees or low-income populations more broadly suggests that Medicaid expansion results in significant reductions in out-of-pocket medical spending, unmet medical need due to cost, and trouble paying as well as worry about paying future medical bills.20,21,22 Medicaid expansion has significantly reduced the percentage of people with medical debt, reduced the average size of medical debt, reduced the average number of collections, improved credit scores, reduced the probability of having one or more medical bills go to collections in the past six months, and reduced the probability of a new bankruptcy filing, among other improvements in measures of financial security.23,24,25 For example, a study of Ohio’s Medicaid expansion found that the percentage of expansion enrollees with medical debt fell by nearly half since enrolling in Medicaid (55.8% had debt prior to enrollment, 30.8% had debt at the time of the study).26

Health outcomes: More broadly, the purpose of health insurance is to facilitate access to care and provide protection against high out-of-pocket costs. Direct evidence that Medicaid or any other type of health coverage improves not just access to care, but ultimately health outcomes, is limited. Research has documented that Medicaid coverage of pregnant women and children contributed to dramatic declines in infant and child mortality in the United States.27 A growing number of studies show that Medicaid eligibility during childhood also has long-term positive impacts, including reduced teen mortality, reduced disability, improved long-run educational attainment, and lower rates of emergency department visits and hospitalization in later life.28 In addition, Medicaid eligibility during childhood appears to yield downstream benefits to the economy, in the form of reduced earned income tax credit payments and increased tax collections due to higher earnings in adulthood.29 With regard to expansion, studies show improved self-reported health following expansion, and multiple new studies demonstrate a positive association between expansion and health outcomes (including findings of improved outcomes for cardiac surgery patients and reduced infant mortality rates (especially among African-Americans)).30,31,32,33 Further research is needed to more fully determine expansion’s effects on outcomes given that it may take additional time for measureable changes in health outcomes occur over a longer time horizon.

Analyses find positive effects of expansion on numerous economic outcomes, despite Medicaid enrollment growth initially exceeding projections in many states and Medicaid growing faster than other programs in state budgets (Figure 5).  Studies show that Medicaid expansions result in reductions in uncompensated care costs for hospitals, clinics, and other providers. 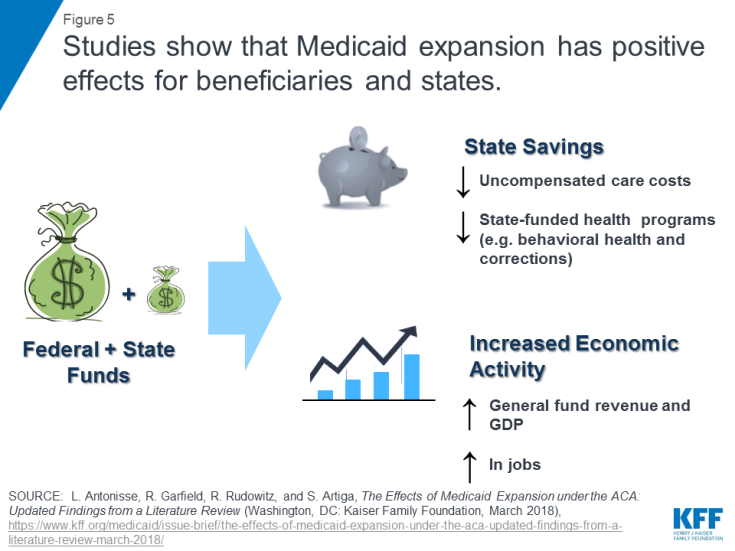 Figure 5: Studies show that Medicaid expansion has positive effects for beneficiaries and states.

State budget effects:  Data supports a net fiscal benefit for states from Medicaid expansion. National research found that there were no significant increases in spending from state funds as a result of Medicaid expansion and no significant reductions in state spending on education, transportation, or other state programs as a result of expansion during FYs 2010-2015.34 Multiple studies suggest that Medicaid expansion can result in state savings by offsetting state costs in other areas, including state costs related to behavioral health services, crime and the criminal justice system, and the Supplemental Security Income program.35,36,37,38,39 New state reports from Montana and Louisiana estimate positive economic effects tied to increased federal revenue from expansion.40,41  Some studies look at experience to date with the expansion when costs were 100% matched by the federal government (so savings estimates could change), but other studies project net fiscal benefit even when states begin to pay for a share of the costs.  For example, the Montana study anticipates net fiscal benefit due to cost savings and increased revenue that hold even after the state share of expansion costs increases to 10 percent in 2020. 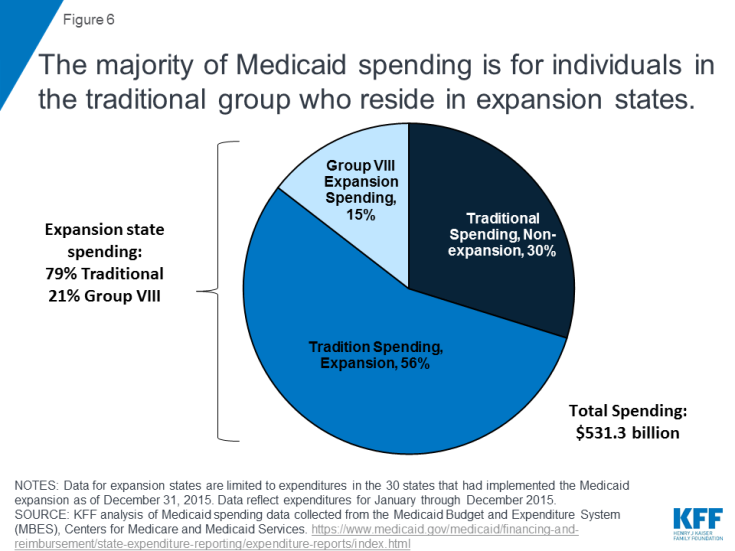 Figure 6: The majority of Medicaid spending is for individuals in the traditional group who reside in expansion states. 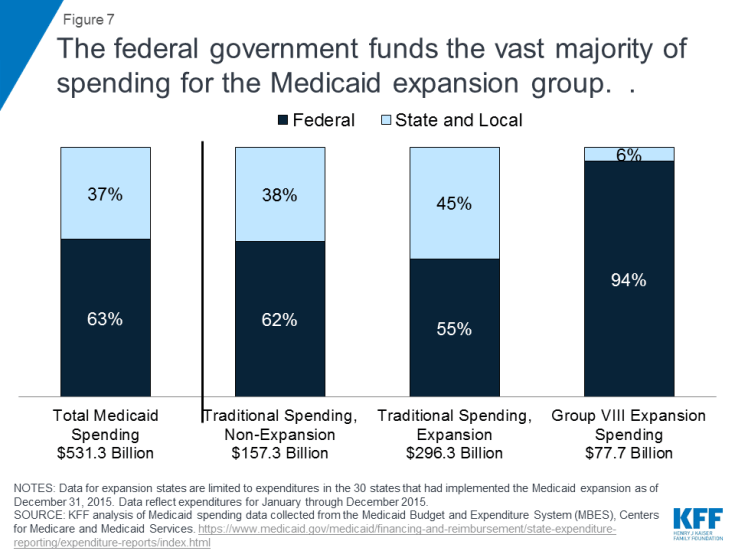 Figure 7: The federal government funds the vast majority of spending for the Medicaid expansion group.

States report that that they are financing the state share of costs through general fund resources, offsetting savings in other budget areas, or dedicated provider taxes.44 In January, voters in Oregon voted on a ballot initiative to finance the state share of the Medicaid expansion through a provider tax; the vote ensured continuation of the Medicaid expansion.45 While other states use provider taxes, Oregon is the only state to put financing of the expansion to the voters. 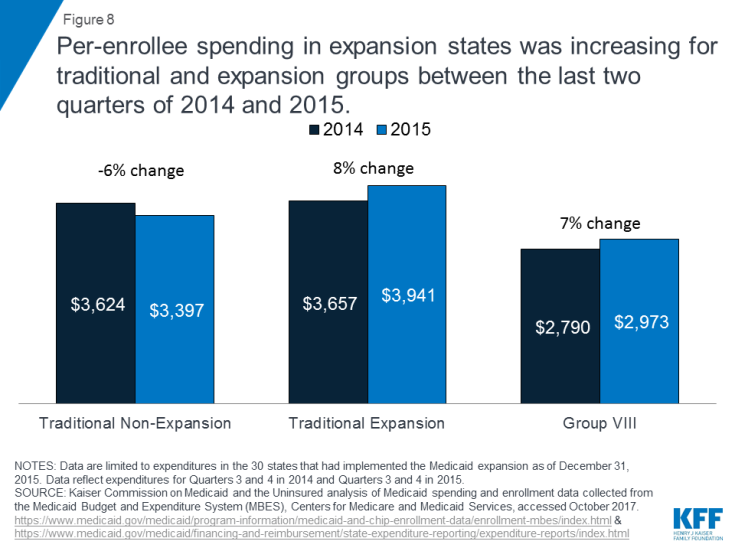 Figure 8: Per-enrollee spending in expansion states was increasing for traditional and expansion groups between the last two quarters of 2014 and 2015.

Studies find that Medicaid expansion can promote work and employment and has had positive or neutral effects on the labor market; however, new work requirements in Medicaid proposals could hamper coverage and increase complexity for many who are working or face barriers to work.

State-specific studies in Colorado, Kentucky, Michigan, Pennsylvania and most recently Montana and Louisiana have documented or predicted significant job growth resulting from expansion.51,52,53,54,55,56 No studies have found negative effects of expansion on employment or employee behavior. In an analysis of Medicaid expansion in Ohio, most expansion enrollees who were unemployed but looking for work reported that Medicaid enrollment made it easier to seek employment, and over half of expansion enrollees who were employed reported that Medicaid enrollment made it easier to continue working.57 Another study found an association between Medicaid expansion and increased volunteer work in expansion states.58

Six in ten Medicaid adults are already working. Among those who are not working, most report illness or disability, caregiving responsibilities, or going to school as reasons for not working.59 Many of these reasons would likely qualify as exemptions from work requirement policies. This would leave 7% of the population to whom work requirement policies could be directed, including those who report they are not working because they are looking for work and unable to find a job (Figure 9). However, work requirements have implications for all populations covered under these demonstrations. Those who are already working will need to successfully document and verify their compliance and those who qualify for an exemption also must successfully document and verify their exempt status, as often as monthly. States would incur costs to pay for the staff and systems to track work verification and exemptions. 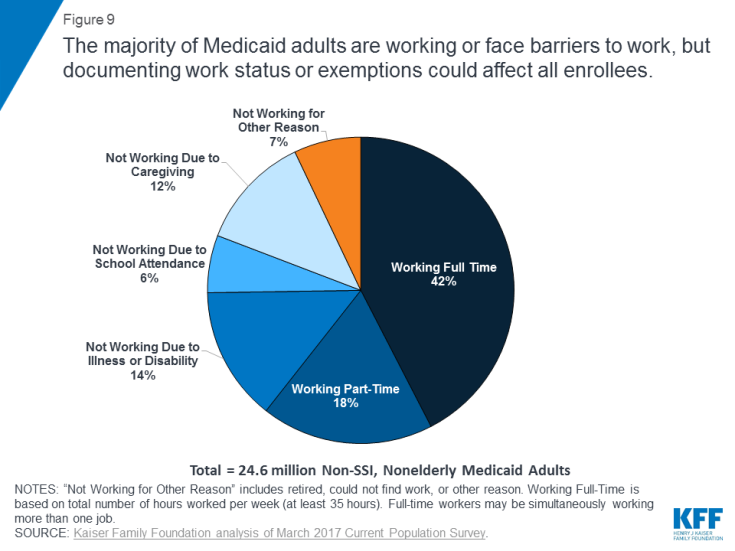 Figure 9: The majority of Medicaid adults are working or face barriers to work, but documenting work status or exemptions could affect all enrollees.

While there is evidence to support an association of unemployment with poorer health status, researchers caution against using these findings to infer that the opposite relationship (employment causing improved health) exists.60,61 Studies on work and health have found that the quality and stability of work is a key factor in this relationship: low-quality, unstable, or poorly-paid jobs could have adverse effects on health.62,63,64 This may suggest that if there are not enough high-quality and stable employment opportunities available to the population subject to Medicaid work requirements, this population could face a difficult choice between accepting a low-wage, low-quality job option to meet the weekly/monthly hours requirement or losing access to health insurance coverage and care. As a 2006 literature review on the relationship between work, health, and well-being found, “Interventions which encourage and support claimants to come off benefits and successfully get them (back) into work are likely to improve their health and well-being; interventions which simply force claimants off benefits are more likely to harm their health and well-being.”65 In addition, studies point to negative impacts of work requirements in TANF and SNAP including modest increases in employment that faded over time; unstable employment, and disproportionate harm to people with disabilities and African Americans.66,67,68