This data note reviews the Medicaid estimates included in the American Health Care Act as passed by the House of Representatives on May 4, 2017 prepared by the Congressional Budget Office (CBO) and staff at the Joint Committee on Taxation (JCT).

CBO estimates that the coverage provisions of the AHCA as passed by the House of Representatives would reduce direct spending for Medicaid by $834 billion over the 2017-2026 period (Figure 1). By 2026, Medicaid spending would be about 24 percent less than what CBO projects under current law. Most of the reduction in spending is tied to estimates of lower enrollment. By 2026, CBO estimates 14 million fewer people would be enrolled in Medicaid compared to current law. Overall, the AHCA would reduce federal deficits by $119 billion over the 2017-2026 period with a number of provisions that increase costs and decrease revenues offset by large reductions in federal spending coming primarily from Medicaid and the elimination of subsidies for non-group health insurance included in the Affordable Care Act (ACA). Overall, the total uninsured would reach 51 million in 2026, or 23 million more than what is projected under current law with the ACA. Key Medicaid provisions include the following: 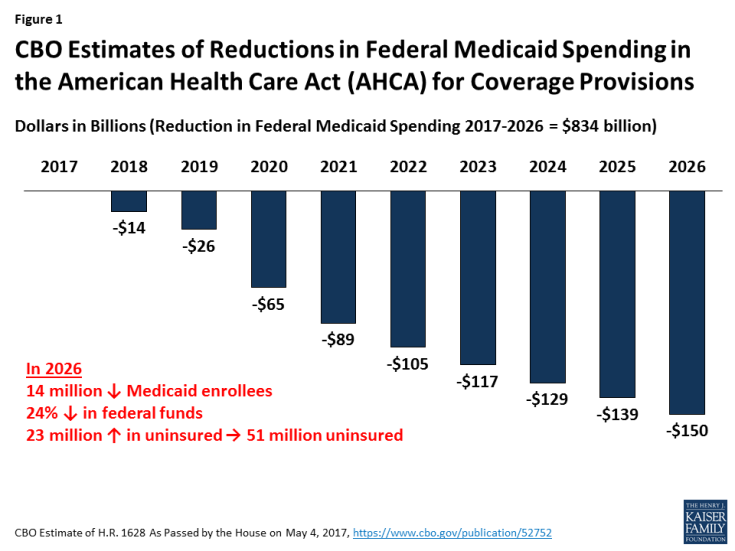 End of Enhanced Match for the ACA. Under current law, states that adopted the ACA Medicaid expansion receive an enhanced match rate for those newly eligible for coverage. Beginning in 2020, the AHCA would reduce the enhanced federal matching rate for newly eligible adults from 90 percent to the traditional match rate (which ranges from 50% to 75%) for those newly enrolled after December 31, 2019. CBO estimates the following effects from this provision:

Impose a Per Capita-Based Cap or Block Grant for Medicaid. Under current law, the federal government matches state Medicaid spending with no pre-set limit. Under the AHCA, beginning in 2020, Medicaid would transition to per capita cap to limit federal financing. The per capita cap would be set for five enrollment groups (the elderly, individuals with disabilities, children, newly eligible adults, and all other adults), increased by the consumer price index for medical care services (CPI-M) for children and adults and CPI-M plus one percentage point for the elderly and people with disabilities multiplied by the number of enrollees in each category in that year. CBO assumes:

Key Changes in the Managers Amendment and House Passed Bill:  The bill as amended and then passed by the House of Representatives included additional provisions that on net reduced federal savings from $880 billion to $834 billion:

Interaction with Other Provisions.