Facebook Twitter LinkedIn Email Print
The Affordable Care Act (ACA) added emphasis to the importance of preventive services in improving lives. As of January 1, 2013, per Section 4106 of the ACA, states can receive a one percentage point increase in their federal Medicaid match rate for preventive services if they cover without cost sharing all the adult preventive services (see Table A1) recommended by the federally-convened U.S. Preventive Services Task Force (USPSTF) and Centers for Disease Control and Prevention’s Advisory Committee on Immunization Practices (ACIP). As of the time of the survey, four states had submitted state plan amendments (SPAs) to receive the 1% increase and since then, 4 additional states (8 total) have submitted SPAs for the enhanced match. States must cover preventive services for adults newly eligible for Medicaid under the ACA, but this is not required for the group of adults enrolled in or eligible for traditional Medicaid prior to the ACA’s expansion of the program.This brief highlights data from a survey of state Medicaid programs conducted by the Kaiser Commission on Medicaid and the Uninsured (KCMU) on coverage of preventive services recommended for non-elderly adults before the ACA was enacted.1,2 The survey asked states about coverage and cost sharing in their fee-for-service Medicaid programs as of January 1, 2013 for 40 adult preventive services rated grade “A” or “B” by the USPSTF and immunizations recommended by the ACIP. The survey also asked about coverage for seven additional preventive services for women that are recommended by the Health Resources and Services Administration (HRSA) (see Table A2).3  In total, 39 states and the District of Columbia replied to the survey. Key Findings include: 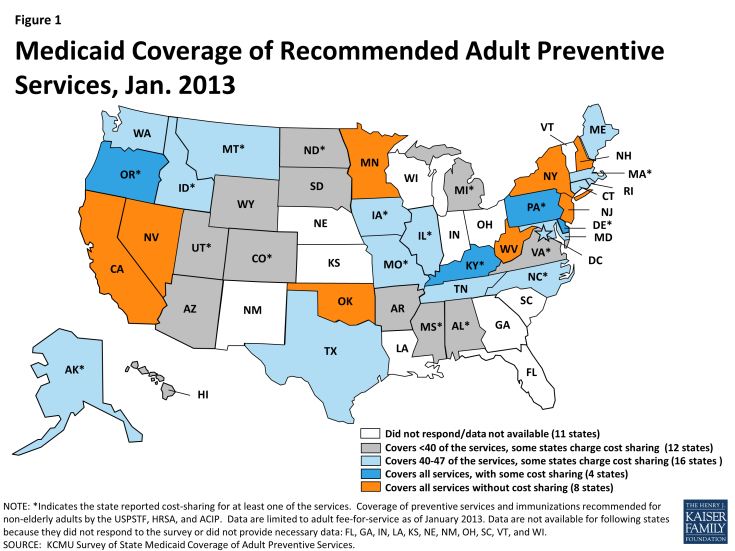 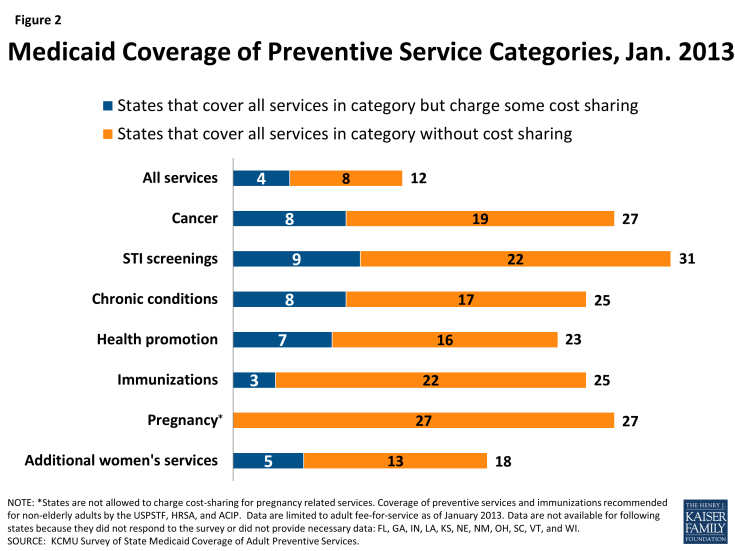