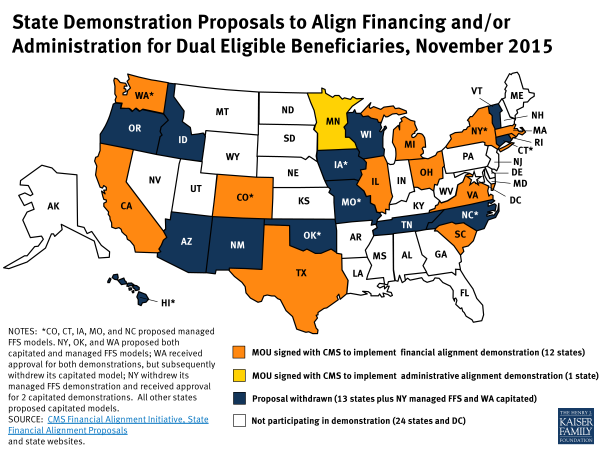 This map shows the current status of the state demonstration proposals to integrate care and align financing and/or administration for beneficiaries eligible for both Medicare and Medicaid. Over 9.6 million seniors and younger people with significant disabilities are dually eligible for both programs, and as many as 2 million of them may be included in the demonstrations. Dual eligible beneficiaries are among the poorest and sickest beneficiaries covered by either program and consequently account for a disproportionate share of spending in both programs.

A number of states are working with the Centers for Medicare and Medicaid Services (CMS) to test capitated and/or managed-fee-for service models to integrate care and align financing for dual eligible beneficiaries, based on new demonstration authority in the Affordable Care Act. Enrollment in the first demonstration became effective in late 2013, with other states following in 2014 and early 2015.