Although nearly all of the nation’s 46 million seniors have health insurance through Medicare, that program does not cover the long-term services and supports (LTSS) that many seniors need. Nearly half of seniors residing in the community have an LTSS need1 due to a cognitive or physical limitation. For example, people with dementia,2 mobility or coordination problems due to stroke, severe vision loss, or significant pain that prevents movement may require LTSS. LTSS provide assistance with routine self-care tasks, such as eating, bathing, and dressing, and household activities, such as preparing meals, managing medication, and doing laundry. LTSS are expensive, with a median annual cost of over $90,000 for nursing facility care, more than $40,000 for homemaker or home health services, and nearly $20,000 for adult day health care in 2015.3 At the same time, many seniors are living in poverty (10%) or near poverty (22%)4 and unlikely to be able to afford paid help, and few have private long-term care insurance to meet their needs. People over age 85 are most likely to need LTSS,5 and the number of individuals in this age group is expected to increase by almost 70 percent over the next two decades.6 The need for LTSS varies by state (Table 1), but all states have a substantial share of their population that currently or may soon need LTSS. Medicaid plays a key role in financing LTSS for many low-income seniors, and its role will grow as the population ages. This fact sheet describes how seniors become eligible for Medicaid LTSS, what LTSS Medicaid covers, and how much Medicaid spends for those services, and highlights key policy issues in Medicaid and LTSS.

How Do Seniors Qualify for Medicaid LTSS?

Not all seniors who need LTSS qualify for Medicaid; they must have low incomes and limited assets. States generally must provide Medicaid to seniors who receive federal Supplemental Security Income (SSI) benefits and may extend Medicaid eligibility to seniors with relatively higher incomes (up to 300% of SSI, or $2,199 per month for an individual in 2016).  At state option, seniors who incur health care expenses may “spend down” to the state’s financial eligibility threshold. After qualifying for Medicaid, often after entering a nursing facility and exhausting their savings, seniors must allocate all of their income except for a small personal needs allowance toward the cost of their health and long-term care services. In 2015, the median monthly personal needs allowance is $50 for those receiving institutional care and $1,962 for community-based care, reflecting that those living in the community face additional costs to maintain housing.7  Seniors also generally must meet asset limits to qualify for Medicaid, typically at SSI levels ($2,000 for an individual and $3,000 for a couple).

In addition to meeting financial eligibility criteria, seniors also must qualify for Medicaid LTSS based on their functional needs.  Functional eligibility for LTSS is commonly assessed by determining a person’s need for assistance with one or more self-care or household activities. Other functional eligibility criteria may include the presence of certain medical conditions or evidence of cognitive impairment. Traditionally, beneficiaries have been required to have functional limitations that would otherwise meet an institutional level of care to qualify for Medicaid home and community-based services (HCBS). However, the Deficit Reduction Act of 2005 gives states the option, expanded by the Affordable Care Act (ACA), to provide Medicaid HCBS to people with functional limitations that do not yet rise to an institutional level of care,8 and states are increasingly offering HCBS to this population to prevent or delay the need for more intensive and costly future care.

Which LTSS Does Medicaid Cover?

LTSS may be provided in the community or in an institution such as a nursing facility. Over the last thirty years, there has been a shift toward serving more people in the community rather than institutions due in large part to the growth in beneficiary preferences for HCBS and states’ obligations under the Supreme Court’s Olmstead decision, which found that the unjustified institutionalization of persons with disabilities violates the Americans with Disabilities Act.9 Still, some people with extensive medical and LTSS needs may require around-the-clock care that is provided in an institutional setting such as a nursing facility. Almost all states (46 states in both fiscal year (FY) 2015 and 2016) continue to focus on expanding beneficiary access to Medicaid HCBS.10

How Much Does Medicaid Spend to Cover Seniors’ LTSS Needs?

Most Medicaid spending on behalf of seniors is for LTSS. Of the $80.4 billion11 Medicaid spent on care for full-benefit12 seniors in FY 2011, over two-thirds ($55.8 billion, or 69%) was devoted to LTSS (Figure 1). LTSS spending for seniors as a share of all Medicaid spending for seniors varies by state, with some states spending a little over half of their total Medicaid expenditures for this population on LTSS, and others spending more than 90% (Table 2). This variation reflects differences in both the needs of states’ elderly beneficiaries and the structure of state Medicaid programs. For example, some states may provide a broader scope of acute care (e.g., dental) services to seniors, while others may provide a broader scope of LTSS. In addition, some states rely on comprehensive risk-based managed care organizations to deliver LTSS, with LTSS spending combined with acute care spending under a single capitation rate. 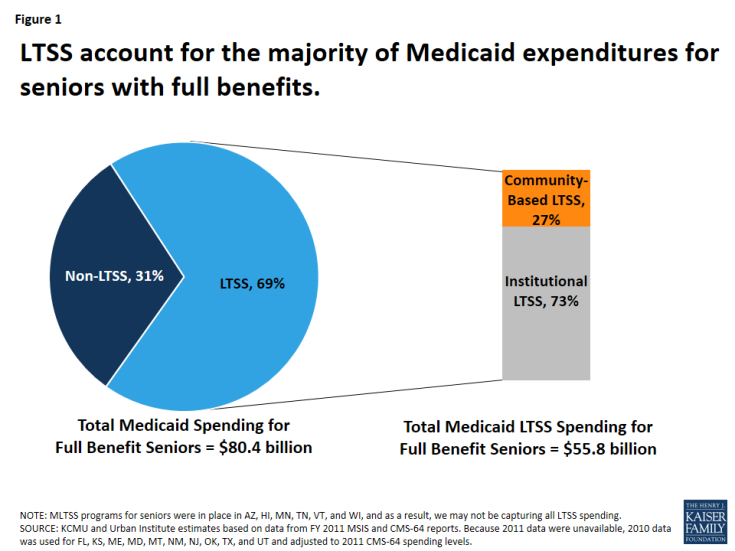 Figure 1: LTSS account for the majority of Medicaid expenditures for seniors with full benefits.

Nationally, Medicaid spent more than $12,000 per full-benefit senior enrollee on LTSS in FY 2011. Medicaid LTSS spending per senior enrollee varied across states, from $6,427 in California to $28,130 in North Dakota (Figure 2 and Table 2). This variation was due in part to differences in the mix of LTSS services used across states and variation in provider reimbursement rates. 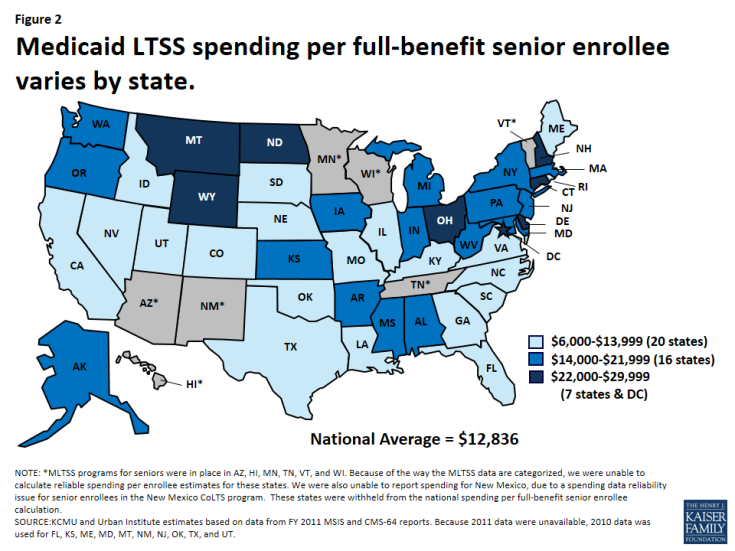 Nearly three-quarters (73%) of national Medicaid LTSS spending for seniors funds institutional services, with just over one-quarter (27%) going toward community-based services as of  FY 2011 (Figure 1).  The split between community-based and institutional Medicaid LTSS spending for seniors in Medicaid varies at the state level, ranging from 7 percent (Florida) to 60 percent (Alaska) in FY 2011 (Figure 3 and Table 2). While all states provide some Medicaid HCBS to seniors, the size and scope of these programs varies, and because many of these services are offered through waivers, enrollment can be capped.  In 2014, there were 78 Medicaid HCBS waivers in 46 states targeted to seniors or seniors and non-elderly people with physical disabilities, with nearly 156,000 individuals on a waiting list for waiver services.13  Waiting list enrollment also varies by state. 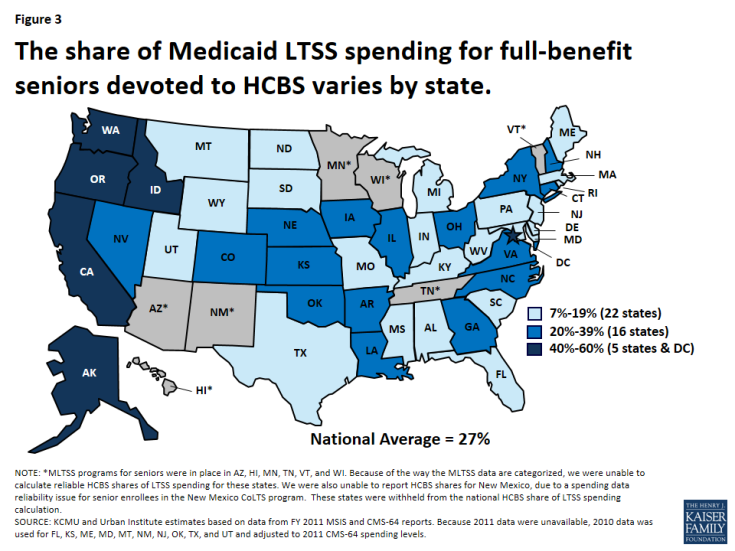 Figure 3: The share of Medicaid LTSS spending for full-benefit seniors devoted to HCBS varies by state.

What are the Current Policy Issues in LTSS for Seniors?

Given that an estimated 70 percent of Americans turning 65 today will use some form of LTSS in their lifetime,14 ensuring adequate access to affordable LTSS for seniors is likely to remain a topic of discussion among policymakers and other stakeholders in the coming decades. While the majority of Americans age 40 and older anticipate needing LTSS as they age and have done some planning, 38 percent expect that Medicare will cover their LTSS expenses; however, while Medicare covers acute and post-acute services, it does not cover LTSS.  Just 20 percent of those surveyed identified Medicaid as a potential source of LTSS coverage, suggesting there are opportunities to educate the public about current LTSS financing options.15 With Medicaid likely to continue to play a primary role in financing LTSS, policymakers have begun discussing how to streamline the existing Medicaid HCBS authorities, which can be complex for states to administer and difficult for seniors who need LTSS to navigate.16

Policymakers also continue to focus on ways to increase access to community-based services as opposed to institutional care. The vast majority of Americans age 40 and over would prefer to receive LTSS in a home or community-based setting rather than in an institution.17 Over the last several decades, total Medicaid LTSS spending (for both seniors and people with disabilities) has been increasingly devoted to HCBS instead of institutional care, surpassing 50% in FY 2013, and reaching 53% in FY 2014.18  However, disparities in access to community-based services remain:  among Medicaid beneficiaries receiving LTSS, only half of seniors lived in the community in 2011, compared to 80% of non-elderly people with disabilities.19  To support seniors’ desire to “age in place,” policymakers will continue to draw on the Medicaid options to provide HCBS, including those added and expanded by the ACA, while also considering how to increase the supply of community-based providers and affordable housing.

LTSS delivery system reforms are another area of recent policy focus, with an increasing number of states pursuing models that seek to integrate LTSS with physical and behavioral health services.  Some states are implementing risk-based capitated managed care models, while others are pursuing managed fee-for-service options, such as Medicaid health homes for beneficiaries with chronic conditions.  Some states are focused on Medicaid LTSS delivery system reforms, while others also are examining how to better coordinate Medicare and Medicaid services for beneficiaries who are eligible for both programs.  As evaluation results and data from these models become available, policymakers may be able to identify promising practices to improve health outcomes and increase access to community-based care while preventing or delaying unnecessary institutional care.

Many of the nation’s 76 million baby boomers will develop chronic health conditions or experience functional impairments with advancing age, leading to a need for LTSS. Improving access to LTSS for seniors is likely to remain a major public health issue as federal and state policymakers, seniors and their families, and other stakeholders consider cost-effective options to best meet the needs of this growing population.  Medicaid is the nation’s primary payer for LTSS for people with low incomes and is likely to continue to play a key role as LTSS financing reforms are considered. In the years ahead, policymakers will be challenged to meet the growing need for LTSS for our nation’s seniors in a manner that promotes community integration and autonomy, supports caregivers, and provides adequate access to needed care while managing costs.