Current variation in state Medicaid spending per enrollee reflects the flexibility built into the program for states to make policy choices to administer their programs within broad federal rules as well as other factors such as the availability of revenues, demand for service, health care markets, and state budget and policy processes. Using a base year and a uniform index to establish the federal caps, as proposed in the AHCA, would lock in variation in states’ Medicaid spending levels per enrollee and reduce the federal contribution to Medicaid over time. As a result, the proposal would have differential impacts on states’ ability to address changing needs and new health challenges. To understand the potential implications of per capita cap proposals, this data note shows variation in per full-benefit enrollee spending by state and eligibility group.

Some Medicaid enrollees are only eligible for “partial benefits.” For example, “partial-benefit enrollees” include those eligible for family planning services only, people who receive only emergency services, those in premium assistance programs, and dual eligibles for whom Medicaid covers only Medicare premiums and cost sharing. Under the AHCA, spending for “partial benefit” enrollees is not subject the cap.1 Among full-benefit enrollees who would be subject to a cap, average Medicaid spending per enrollee was $6,396 in 2014. Per enrollee spending is higher among the aged and individuals with disabilities due to the higher use of complex acute services and long-term care among these populations ($17,476 and $19,033, respectively, for FY 2014). Average spending per Medicaid enrollee was lower for adults and children ($3,955 and $2,602, respectively). For each eligibility group, there is considerable variation across states in per enrollee spending (Figure 1 and Map 1). An additional table provides an index value to show how per enrollee amounts for each state compare to the average per enrollee spending for the US as a whole. For example, spending for full-benefit enrollee ranges from $4,003 to $10,721, or 0.63 (63%) to 1.68 (168%) of the US per enrollee amount. 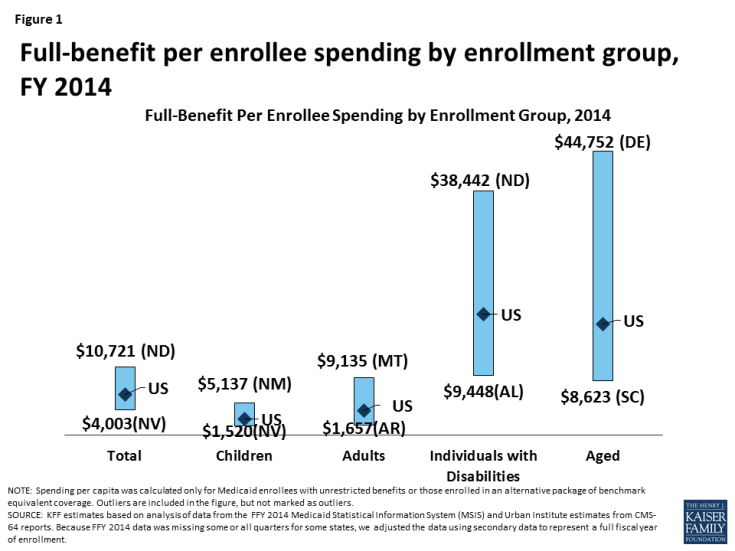 Interactive Map 1: Spending Per Full-Benefit Enrollee, FY 2014 (back to top)

Table 2: Medicaid Spending per Full-Benefit Enrollee (back to top)

Table 3: Ratio of State Per Enrollee Spending to the Average US Per Enrollee Medicaid Spending by Eligibility Group (back to top)