New Kaiser Survey Finds Eleven Million Newly Insured Adults As of Mid-December, But Nearly Half Who Remained Uninsured One Year After Full Implementation of the Affordable Care Act Were Eligible for Medicaid or Marketplace Tax Credits

Many Of The Remaining Uninsured Say They Didn’t Seek Coverage or Considered It Too Expensive, While Others Were Told (Or Believed) They Were Not Eligible

About 11 million adults had become newly insured under the Affordable Care Act by mid-December 2014, according to a new national survey of more than 10,000 adults by the Kaiser Family Foundation.  Nearly half of the approximately 30 million adults who remained uninsured were eligible for assistance under the law, based on their survey responses, but many reported that they had not sought coverage. And among those who did seek coverage, many believed they had been found ineligible or considered the coverage offered too expensive.

The new survey report, Adults who Remained Uninsured at the End of 2014, is the first in a series of analyses that will draw upon the findings of the comprehensive Kaiser survey, which focuses on low- and moderate-income adults and was conducted between September 2 and December 15, 2014. The Foundation conducted a similar survey in 2013, before full the implementation of the ACA health insurance marketplaces and the expansion of Medicaid in many states. 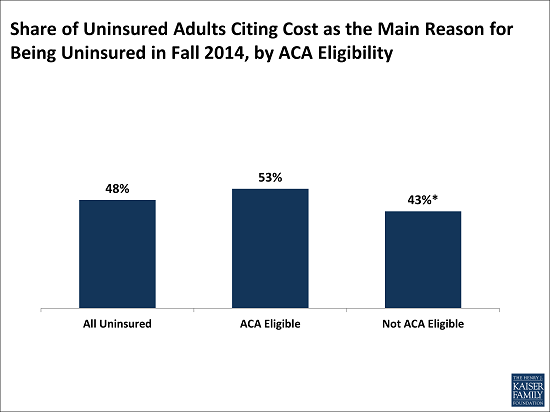 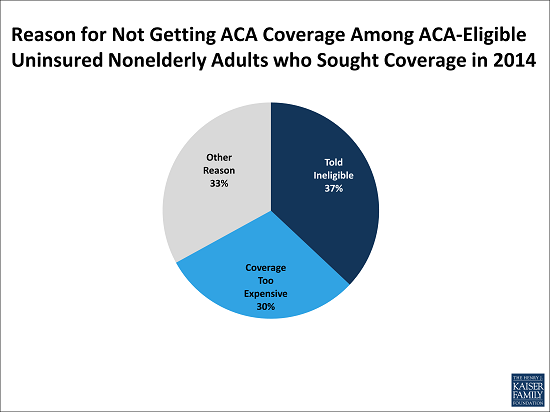 Although much attention was paid to technical difficulties during the initial 2014 ACA open enrollment period, website glitches and other logistical issues in applying for coverage do not appear to be a leading reason why people went without insurance in 2014. Only 20 percent of the remaining uninsured overall said they did not have coverage because they had an application still pending (12%) or because they didn’t finish the application (8%).

“The findings show how important it is to come up with more effective strategies, in person, online and elsewhere, for educating people about their eligibility for coverage and financial assistance under the law,” said Rachel Garfield, a senior researcher for the Foundation who is leading the survey project and is the lead author of the new report.

Of the uninsured adults who are eligible for help under the ACA, about half indicate that they plan to get health insurance from some source in 2015. The open enrollment period for coverage in the ACA marketplaces closes on February 15, 2015 for most people. Those eligible can enroll in Medicaid throughout the year.

The survey also finds that about half of the roughly 30 million remaining uninsured adults are ineligible for any assistance under the law. Many are low-income, including the nearly 4 million adults in the “coverage gap”  — those living in states that have not expanded Medicaid who earn too much to qualify for their state’s current Medicaid program but not enough to get ACA marketplace subsidies. Also ineligible for assistance under the law are millions of uninsured who have an offer of coverage through their employer that they do not take up, are undocumented immigrants, or have incomes above 400 percent of the poverty level and do not qualify for subsidies to make coverage more affordable.

“No matter how well the ACA works, there are still substantial numbers of uninsured people with no affordable option for health coverage, ” said Diane Rowland, Executive Vice President of the Foundation and Executive Director of the Foundation’s Kaiser Commission on Medicaid and the Uninsured.

The full survey report, including additional detail on the survey methods, is available online at kff.org.