Awareness of PrEP Has Increased, though a Significant Knowledge Gap Remains about the Prevention Option; Many Also Understate Effectiveness of Antiretroviral Medications

The poll is the first to probe in depth about the public’s views and knowledge of the nation’s HIV epidemic since President Trump used his Feb. 5 State of the Union address to announce the new initiative to significantly reduce the HIV epidemic in the U.S. within ten years.

Black and Hispanic adults – populations that are disproportionately affected by HIV – are more likely than white adults to view the epidemic as very serious for the nation overall and for people they know. 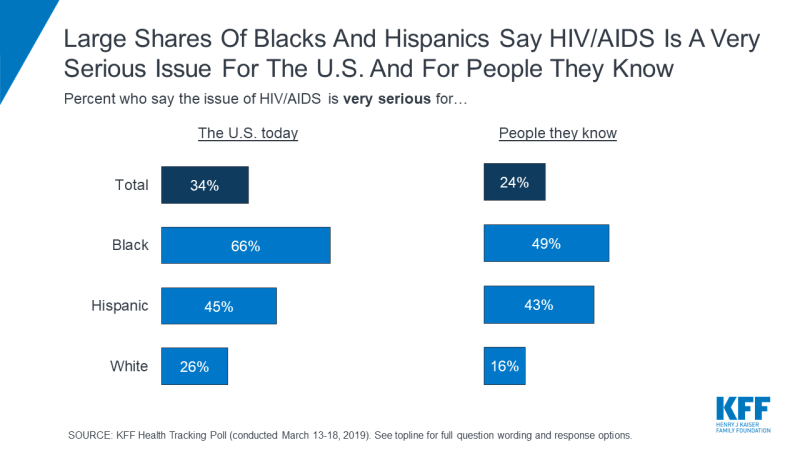 These differences by race also extend to people’s own personal concerns with nearly four in ten black adults (41%) and half (51%) of Hispanic adults saying they are concerned about getting HIV compared to one in ten white adults (12%).

The survey also assessed public awareness of newer HIV prevention and treatment strategies. Less than half (42%) of the public overall is aware of PrEP, a prescription medication that dramatically lowers the risk of getting HIV when taken as a preventive measure.  Awareness of PrEP is highest among black Americans (55%), though a significant minority (45%) don’t know such a drug exists. PrEP awareness has increased since 2014, when 14 percent of the public knew about the drug.

There are also gaps in understanding about how antiretrovirals (ARVs), the medications used to treat HIV, work. Small shares are aware the medications used to treat people living with HIV are “very effective” at both improving the health of people living with HIV (27%) and preventing the spread of the virus (15%). Awareness about antiretrovirals’ ability to stop the spread of the virus is somewhat higher among black and Hispanic Americans than white Americans, but the vast majority across all groups underestimate its effectiveness. 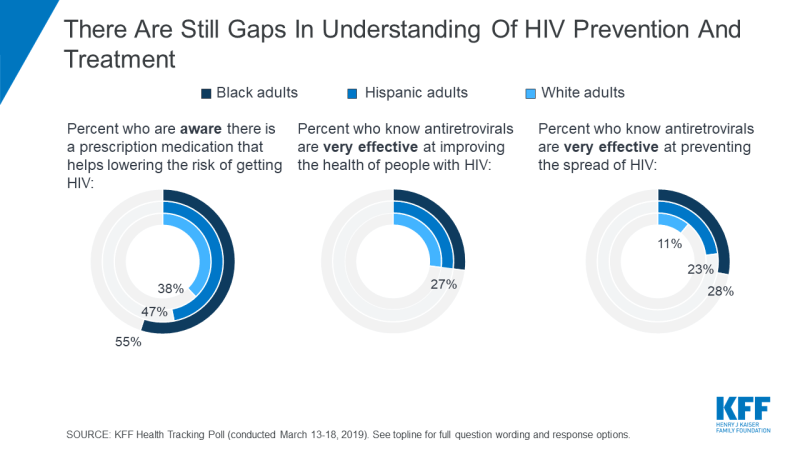 About half (52%) have not heard the term “undetectable,” which refers to the use of ARVs to reduce the viral load to levels not detected by standard lab tests. Another 8 percent say they have heard the term but do not know what it means. This prevention strategy is commonly known as treatment as prevention. According to the CDC, when someone maintains an undetectable viral load there is effectively no risk of sexual transmission. Both PrEP and treatment as prevention are key elements of the new plan.

Support for Medicare-for-all Holds Steady, But Current Debate May Be Shaping Partisan Opinions

This month’s poll also probes the public on why they may support or oppose a national health plan and finds people’s responses tend to echo the messages emphasized by both sides of the debate.

The poll finds a majority (56%) of the public continues to favor a national health plan called Medicare-for-all through which all Americans would get their insurance through a single government plan, while about four in 10 (39%) oppose.  These shares are unchanged from KFF polls earlier this year.