In the final Kaiser Health Tracking Poll before the 2014 midterm elections in November, the Affordable Care Act (ACA) continues to be just one of several issues on voters’ minds. Less than 1 in 10 registered voters (8 percent) identify the ACA as the most important issue to their vote, ranking 5th behind the economy (16 percent), dissatisfaction with government (12 percent), education (10 percent) and the situation in Iraq and Syria (9 percent). The ACA ranks 4th for Democrats, Republicans, and independents alike. Just over half of voters say they’re tired of hearing Congressional candidates talk about the ACA and wish they would move on to other issues, while 44 percent say they want candidates to continue the discussion. Meanwhile, as campaigns make their final appeal to voters, 6 in 10 report seeing political advertising related to the ACA, with more saying they have seen mostly negative advertising about the ACA rather than mostly positive.

On the heels of the election is the start of the ACA’s second open enrollment period on November 15th, and, at this point, one key target – the uninsured – are not yet tuned in. About 9 in 10 of the uninsured are unaware of when the next open enrollment period begins. More specifically, two thirds of the uninsured say they know “only a little” or “nothing at all” about the marketplaces where people can shop for insurance and just over half are unaware of financial assistance available to help low- and moderate-income people purchase insurance. Among the general public more broadly, views on the ACA remain similar to past months with more expressing unfavorable views of the law than favorable and more wanting Congress to work to improve the law rather than repeal it.

Registered Voters’ Views Of The ACA In The Election

ACA Is One Of Many Issues Important To Voters

With the 2014 midterm election less than one month away, the latest Kaiser Health Tracking Poll finds the ACA continues to be a second-tier issue on voters’ minds, and many say they are tired of hearing candidates talk about the law. Just over a quarter (27 percent) of registered voters say the health care law will be an “extremely important” issue in their vote and about another third (35 percent) say it will be “very important”. But when asked to choose the MOST important issue, just 8 percent pick health care, ranking behind the economy (16 percent) and dissatisfaction with government (12 percent) and similar to other issues like education (10 percent), the situation in Iraq and Syria (9 percent), and immigration (6 percent).  Additionally, 29 percent of voters do not say that any of these issues are extremely important to their vote, perhaps because no one issue outshines another or they consider other factors more important to their vote such as the personal characteristics of the candidates. 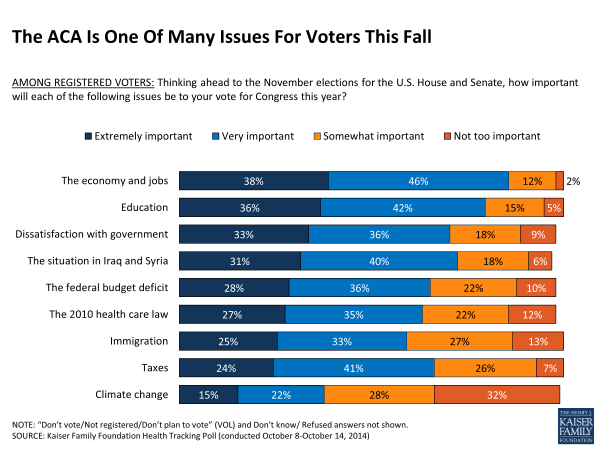 Across party lines, the ACA ranks 4th as voters’ most important issue for Democrats, Republicans, and independents alike. 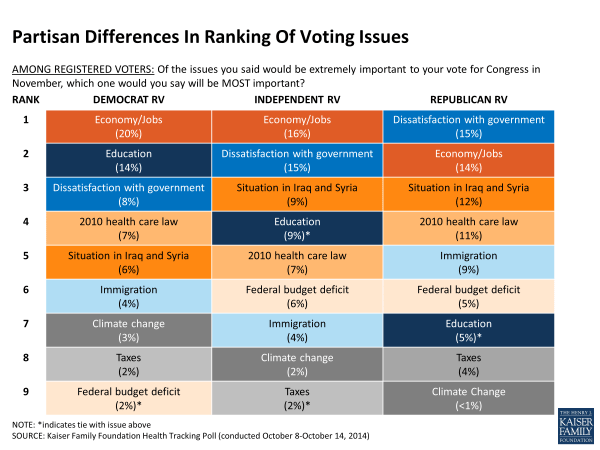 At this point in the election season, slightly more than half (53 percent) of registered voters say they are tired of hearing candidates for Congress talk about the health care law and would prefer they move on to other issues, while 44 percent say they feel it is important for Congressional candidates to continue debating the issue. About 7 in 10 of Democratic voters and voters with a favorable view of the law say they would like candidates to move on, while about 6 in 10 of Republican voters and voters with an unfavorable view of the law say they think it is important for the debate about the law to continue. Independent voters are in the middle, but tilt toward wanting candidates to move on to other issues. 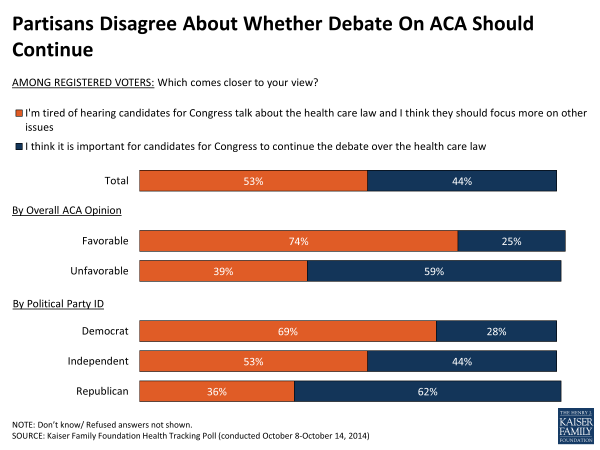 With the midterm elections and the second open enrollment period quickly approaching in November, substantial shares of voters report seeing ads or commercials about the health care law. About 6 in 10 voters (62 percent) say they’ve seen ads in the last 30 days that were opposed to the law, in support of the law, or were trying to influence their vote for a political candidate based on their stance on the law. A larger share of voters report seeing more ads opposed to the law than ads in support of it (25 percent versus 6 percent), although 27 percent say they have seen about an equal number of both and about four in ten (39 percent) say they didn’t see any ads in support of, opposed to or trying to influence their vote. In states with competitive Senate races,1 the share of voters reporting that they have recently seen these ads increases to about three-quarters (74 percent), with over one-third (36 percent) saying more of the ads were negative compared to just 3 percent who said more of the ads were positive. 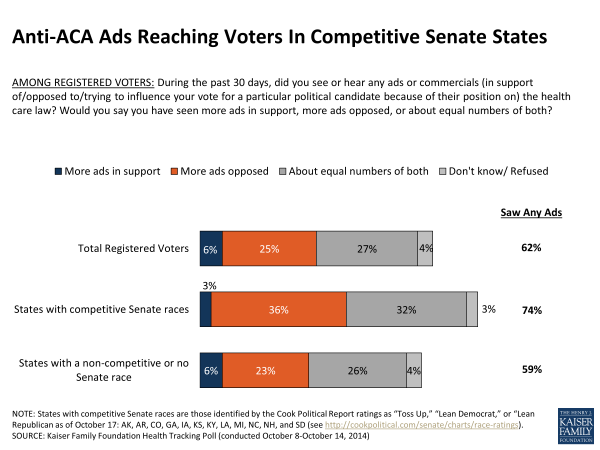 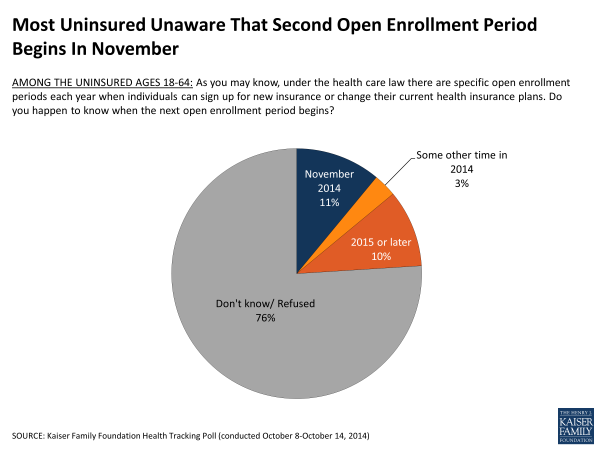 Two-thirds of the uninsured (66 percent) say they know “only a little” or “nothing at all” about the marketplaces where people who don’t get coverage through their employers can shop for insurance and just over half (53 percent) of the uninsured are unaware of the financial assistance available to help low- and moderate-income individuals purchase insurance. 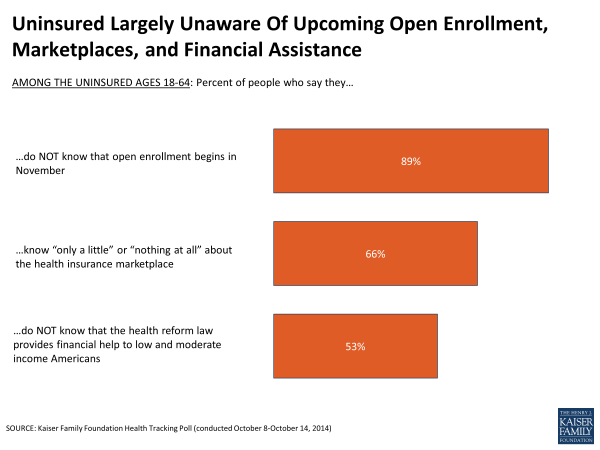 Most Uninsured Plan On Getting Coverage Soon 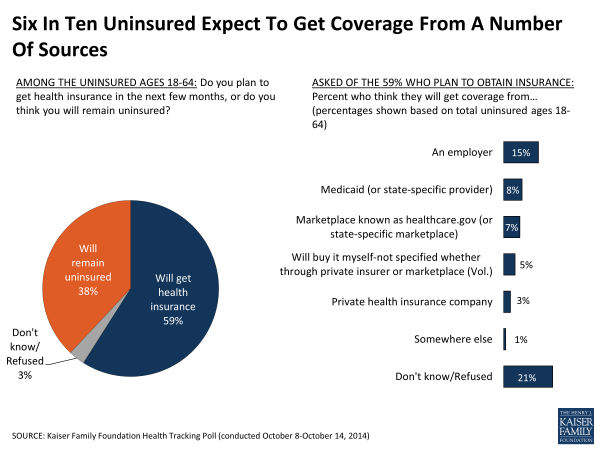 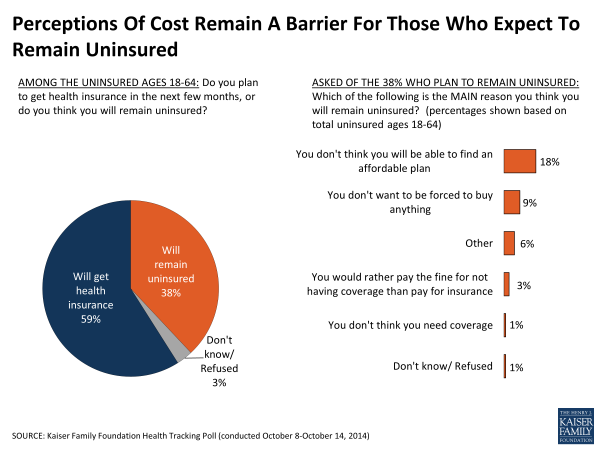 There are a variety of factors that make the uninsured a difficult group to reach and enroll in coverage. About 6 in 10 (63 percent) report family income of less than $30,000 a year and nearly half (46 percent) have been without health insurance for 2 years or more. In addition, a third (32 percent) identify as Hispanic and 17 percent opted to take the survey in Spanish.

A Check In On The Public’s Views Of The Law

This month’s tracking poll finds few changes in the public’s views of the law. Negative views of the health care law continue to outweigh positive views (43 percent unfavorable, 36 percent favorable). The share expressing an unfavorable opinion had increased to 53 percent in July, but has now returned to levels reported at about this same time last year as the first open enrollment period began. 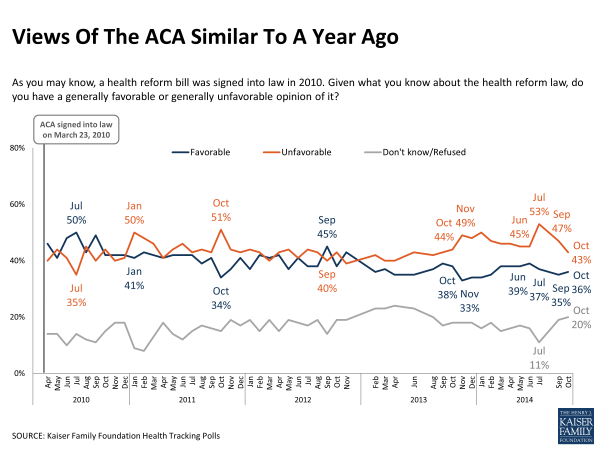 Most Americans (56 percent) say the health care law has had no direct impact on their families. For those who report being impacted, more say the law has hurt them (26 percent) than say it has helped them (16 percent). Perceived personal impact of the law also varies by political affiliation. Republicans are more likely to say they have been hurt by the law (48 percent), Democrats are more likely to say they have been helped (28 percent), and independents fall in the middle of the two, though more independents feel they have been hurt than helped. 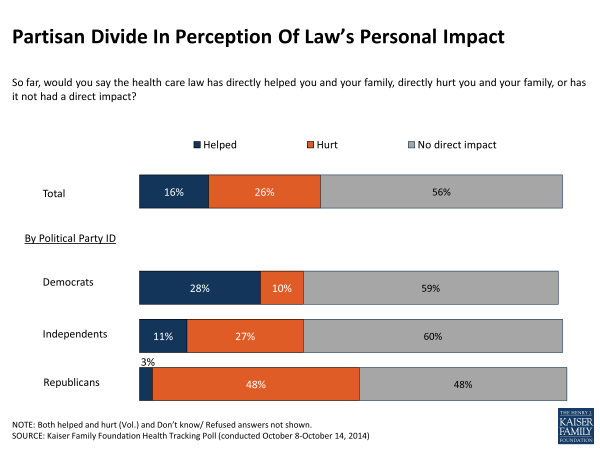 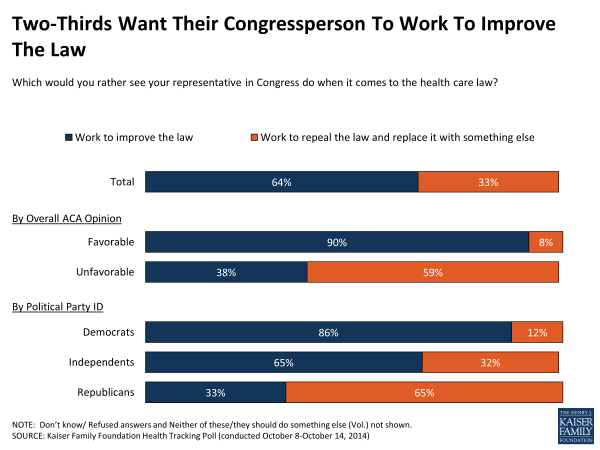