The latest Kaiser Health Tracking Poll finds that just prior to the Affordable Care Act (ACA) open enrollment beginning this past Saturday, the uninsured remained largely unaware of its start, although about half of the uninsured expect to get health insurance in the next few months and seven in ten say that health insurance is something they need. Opinion on the law remains similar to past months – 46 percent say they have an unfavorable view of the law and 37 percent say they have a favorable view. Americans are divided as to what Congress should do next on the law – 29 percent say they support repealing the law entirely, 17 percent say they support scaling back what the law does, 20 percent support moving ahead with the law as is, and 22 percent feel that the law should be expanded. But like opinion on the law overall, partisans fall on opposite ends of the spectrum. The public has no expectation that debate on the ACA will die down soon; a finding that Democrats and Republicans agree on. Most say that now that the midterm elections are over the amount of partisan debate will increase or stay about the same. Finally, on the heels of the midterm elections, few voters (9 percent) named health care as one of the two most important factors in their vote, ranking 5th behind partisan control of Congress (27 percent), a candidate’s platform (18 percent), the economy and jobs (17 percent), dissatisfaction with government (16 percent) and similar to a candidate’s personal characteristics (9 percent).

The Uninsured And Open Enrollment Round Two

Many Uninsured Are Unaware Of Open Enrollment Period

As the second open enrollment period under the Affordable Care Act (ACA) began this month, the uninsured remained largely unaware of the renewed opportunity to purchase or enroll in health insurance. Similar to last month, about 9 in 10 (89 percent) are unsure of when open enrollment starts, including about three quarters (77 percent) who say they don’t know and 12 percent who gave an answer other than November 2014. 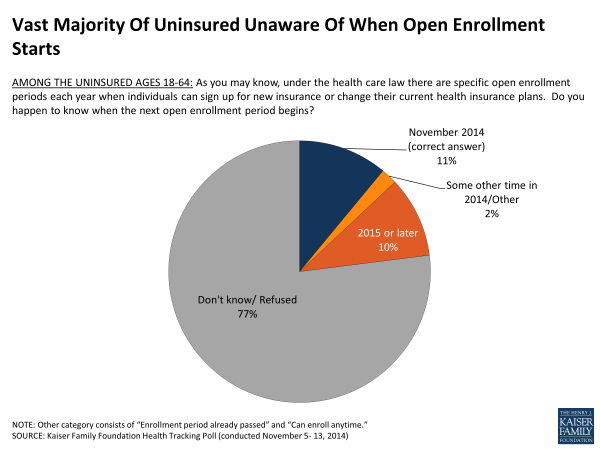 Visibility Of Outreach And Advertising

At this early point in the open enrollment season, about 1 in 5 uninsured (18 percent) say they have been personally contacted in the last six months about the health care law.

Many more uninsured, however, report seeing advertising about how to enroll in health coverage or health insurance products more generally. Four in 10 (40 percent) of the uninsured say they have recently seen or heard an ad from an insurer about health insurance. About a third (34 percent) of the uninsured say they have seen or heard an ad in the past month that provided information about how to get insurance under the health care law. These shares are similar to reports among the uninsured in the October tracking poll. 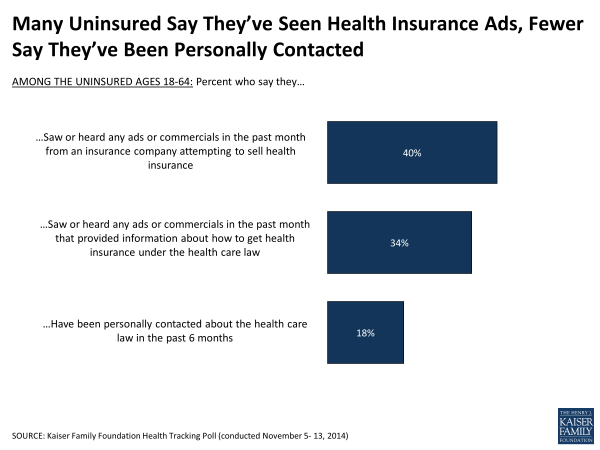 Plans To Get Coverage

Looking ahead, the uninsured are divided on whether they plan on getting insurance in the next few months — 49 percent say they think they will obtain coverage and 41 percent say they think they will remain uninsured while 10 percent aren’t sure. The most common reason the uninsured say they will obtain health insurance is because they feel it is something they need (25 percent among all uninsured), while many fewer say that the law’s requirement to have health insurance (8 percent) or the penalty for not having coverage (5 percent) is the main factor.  Those who expect to remain uninsured are most likely to say the main reason they won’t get insurance is because they don’t think they will be able to find an affordable plan (24 percent among all uninsured). 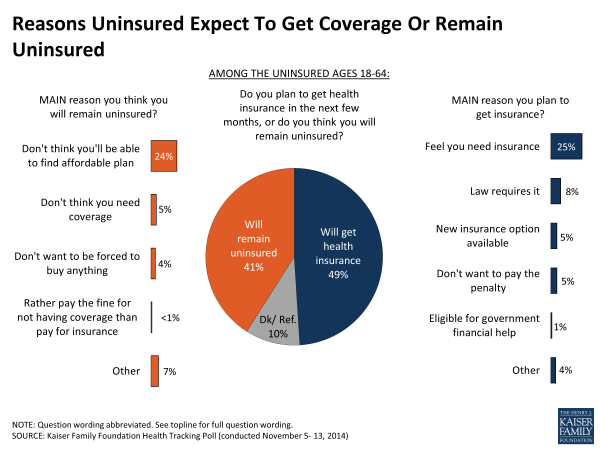 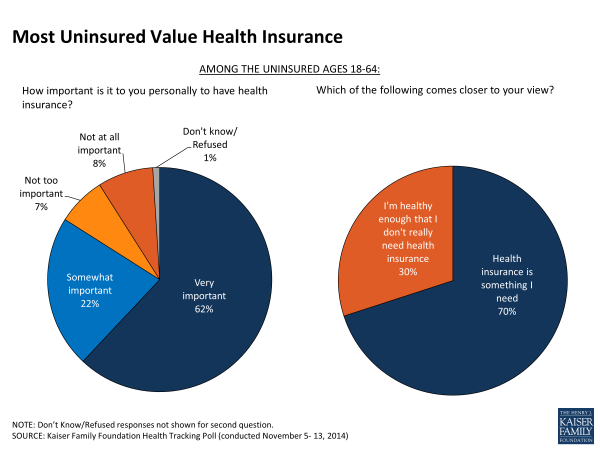 Characteristics common among the uninsured can often make this group difficult to reach and enroll in health insurance. About 4 in 10 (38 percent) of the uninsured are under age 30 and 63 percent report family income of less than $30,000 a year. Many (59 percent) say they have been uninsured for 2 years or more and about 3 in 10 (29 percent) report being in only “fair” or “poor” health. In addition, a third (33 percent) identify as Hispanic and 15 percent chose to take the survey in Spanish. 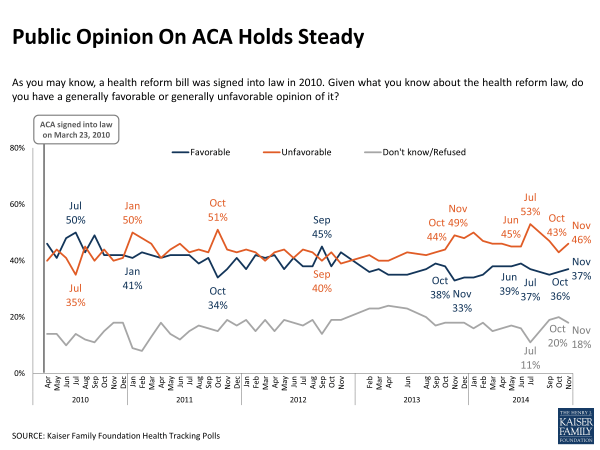 The Public Is Divided On Future Of Law

Americans express a variety of opinions about what Congress should do next when it comes to the health care law. About 3 in 10 (29 percent) say they’d like Congress to repeal it outright and another 17 percent say they support scaling the law back.  In addition, about 1 in 5 each support moving ahead with the law as is (20 percent) and expanding the law (22 percent). 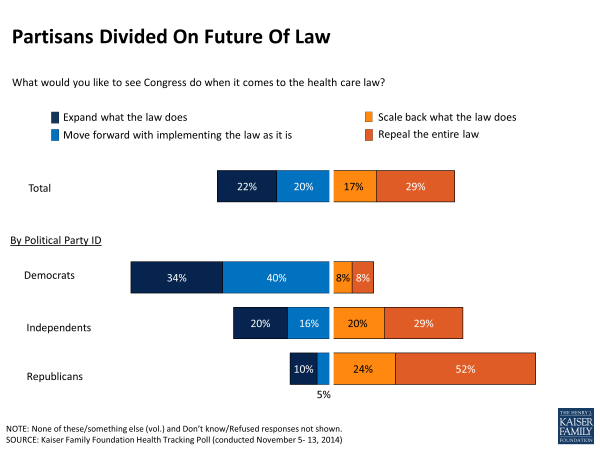 Most Expect Debate About Law To Increase Or Hold Steady 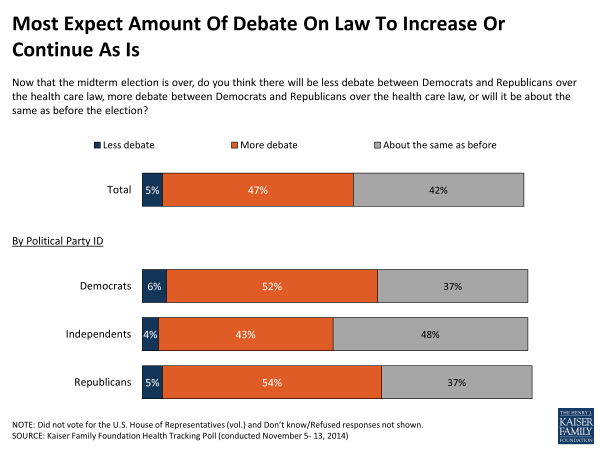 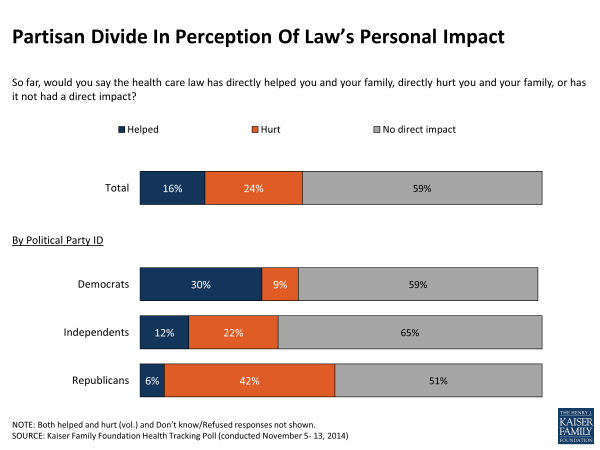 Most of those who report having been helped by the law say it allowed someone in their family to get or keep health coverage (6 percent), made it easier to get the health care they need (5 percent), or lowered their health care costs (3 percent). 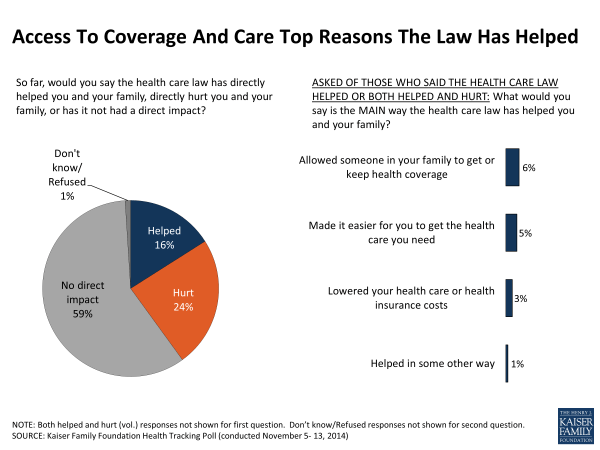 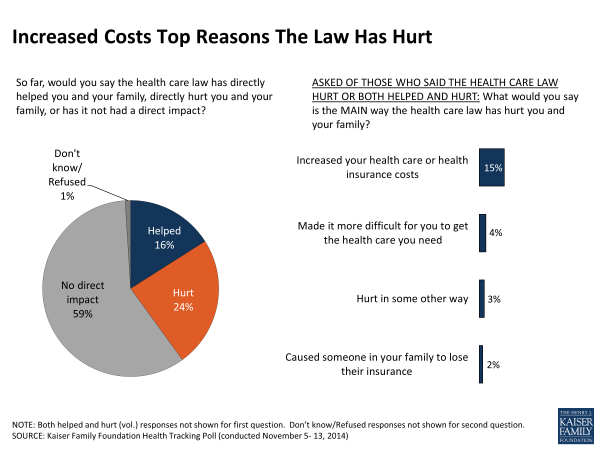 ACA And The 2014 Midterm Election 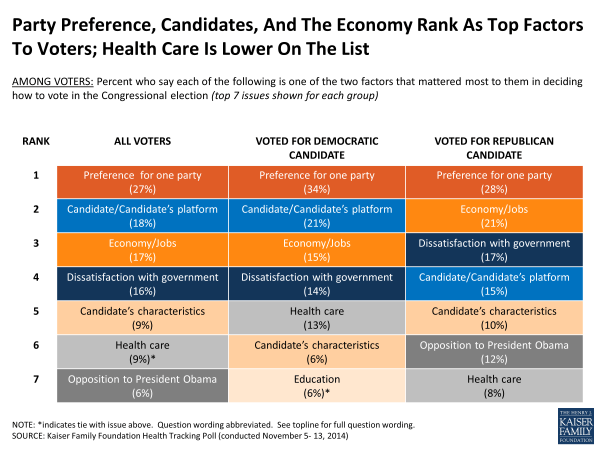 When asked to name in their own words what the two most important factors were in their vote for Congress, party loyalty rises to the top.  About a quarter (27 percent) of voters responded that what mattered most to them was voting for their preferred party and party control in the House and Senate. After party loyalty, similar shares named factors such as a candidate’s platform or track record (18 percent), the economy and jobs (17 percent), dissatisfaction with government (16 percent).  Further down the list was health care with 9 percent of voters naming it as an important factor in their vote, including 6 percent who specifically referenced the Affordable Care Act.

Similar shares of people who voted for the Democratic candidate and those who voted for the Republican candidate mentioned health care as one of their two top voting issues (13 percent and 8 percent, respectively). Five percent of voters who report choosing the Republican candidate specifically mentioned opposition to the ACA, while 3 percent of Democratic voters specially referred to the ACA in a positive way.

Those who feel their families have personally benefited from the law are more likely to say health care was a major factor in their vote – 1 in 5 voters compared to 7 percent of those voters who say they have been hurt by the law or haven’t been impacted.