The latest Kaiser Health Tracking Poll finds that more than four years after the passage of the Affordable Care Act (ACA) and several months into the first year of its coverage expansions, most Americans do not feel personally impacted by the law. Among the minority who say they have felt an impact, more feel they have been harmed than helped by the law, with Republicans more likely to say they have been hurt and Democrats more likely to say they have been helped. More continue to want Congress to work on improving the law than repealing it, with those who want improvements calling for lower health care costs, expanded access, and more help for specific populations. Six months out from the 2014 midterm election and in the midst of primary battles in many states, the ACA is already a frequent topic of political conversation and the subject of an abundance of campaign advertising. Even at this early stage, about half of registered voters say they are tired of hearing candidates for Congress talk about the health care law and want them to focus more on other issues like jobs, while just over four in ten want candidates to continue debating the law. Views on this question track the familiar ACA partisan divide. A majority of voters say they’ll consider a candidate’s position on the health care law as one of many factors in their vote, while three in ten say they would only vote for a candidate who shares their views on the health care law. This is about the same as the share who say their vote would be similarly dependent on a candidate’s views on government spending and somewhat higher than the share who say their votes depend on a candidate’s views on job creation and immigration. With the election still six months away, just over half of voters say they haven’t paid much attention to the campaign so far.

Majority Says They Haven’t Been Impacted By ACA; Partisan Divide In Who Reports Being Helped And Hurt

With open enrollment closed and the first year of the ACA’s coverage expansions underway, six in ten Americans continue to say they have felt no direct personal impact of the law yet. Among those who say they have felt an impact, a larger share reports being directly hurt than directly helped by the law (24 percent versus 14 percent). However, just as overall opinion of the law has divided along party lines from the start, reported personal impact appears to do the same, with Democrats more likely to say the law has helped them (26 percent) and Republicans more likely to report being hurt by the ACA (37 percent). Even when controlling for other demographic factors that might be related to ACA impact, such as income, race/ethnicity, and insurance status, party identification remains a significant predictor of whether an individual reports being helped or hurt by the law. 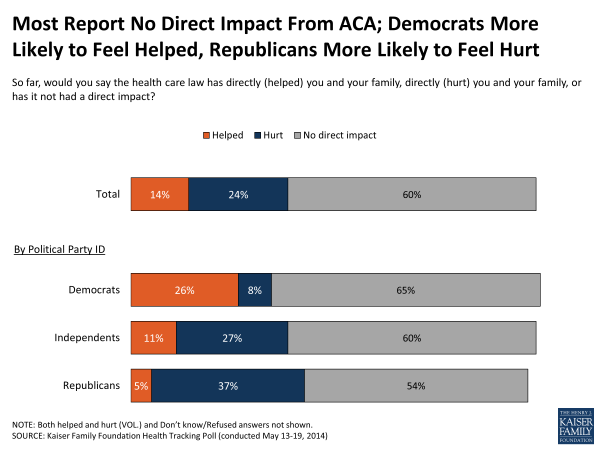 When those who report being helped or hurt by the law are asked for further detail on how they’ve been impacted, most of those who report being hurt say it has increased their health care costs (14 percent of the public overall), while fewer say it has made it more difficult for them to access care (3 percent) or caused someone in their family to lose insurance (2 percent). Among those who feel they’ve been helped by the law, the largest share (5 percent of the public overall) say it has allowed someone in their family to get or keep coverage, while others say the law has made it easier for them to get needed care (4 percent) or that it has lowered their health care costs (3 percent).

This month, 45 percent of the public reports having an unfavorable view of the health care law and 38 percent report a favorable one. This 7-percentage point gap has held fairly steady since March, but is smaller than the 14- to 16-point unfavorable tilt in opinion measured in Kaiser tracking polls from November through January following the botched rollout of the health insurance exchanges. 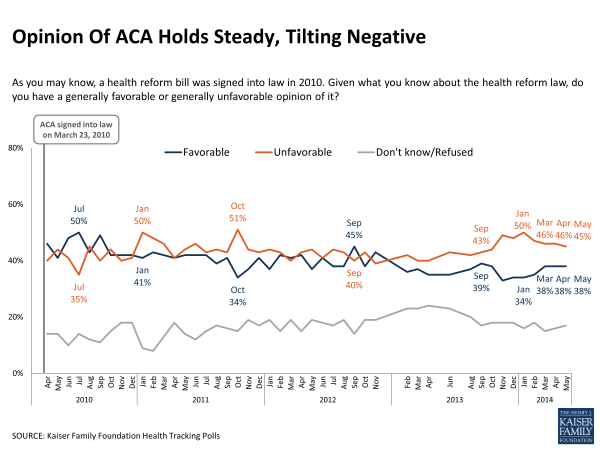 Sharp political polarization continues to exist, with about two-thirds (64 percent) of Democrats having a favorable opinion of the law and three- quarters (75 percent) of Republicans expressing an unfavorable view. The intensity gap in opinion also continues, with nearly twice as many Republicans expressing a “very” unfavorable view as Democrats having a “very” favorable one (61 percent versus 36 percent). 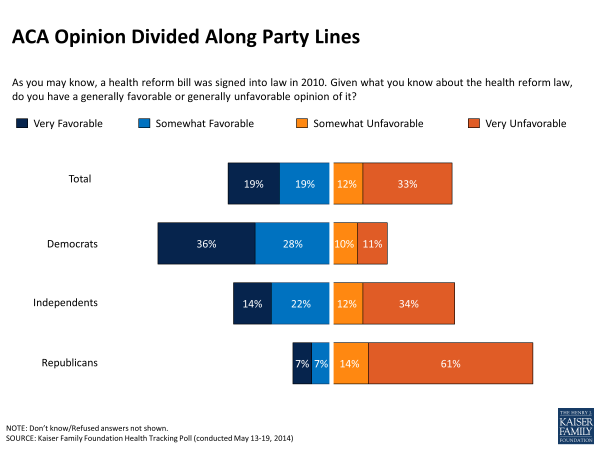 Three In Ten Report Knowing Someone Who Gained Coverage 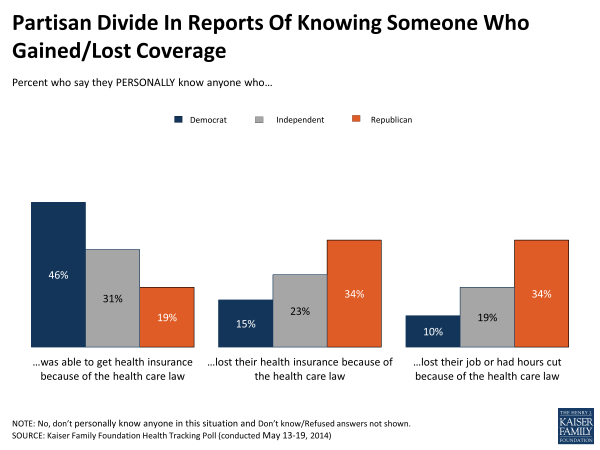 As previous Kaiser tracking polls have found, despite the negative tilt in opinion of the law overall, the public would rather Congress work to improve the ACA than throw it out and start over. About six in ten (59 percent) say they would prefer their representative in Congress work to improve the law, while about a third (34 percent) want their representative to work to repeal the law and replace it with something else. 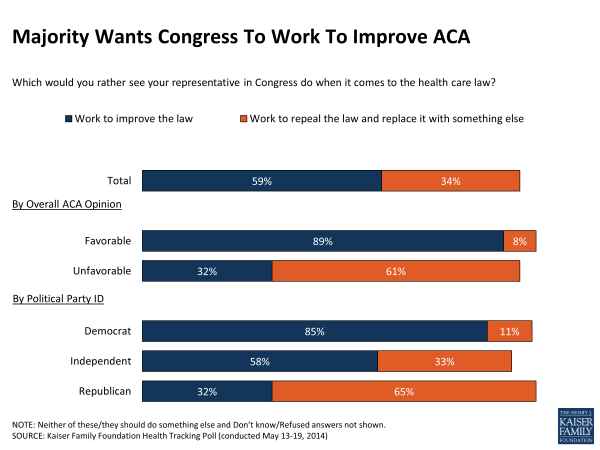 When asked to say in their own words how they would like to see the law improved, those who want improvements primarily want Congress to do more to make health care and insurance more affordable (20 percent), followed by increasing help for specific groups such as seniors or the poor (11 percent) and expanding access and availability more generally (11 percent). A variety of other improvements were suggested by small shares of the public. It’s notable that roughly a quarter of those who want their Congressional representative to work on improvements to the law either didn’t know or declined to state any specific way in which they’d like to see the law improved.

One factor in the public’s preference for improving over repealing and replacing the law may be their sense of whether a viable replacement exists. At this point, a majority of the public (61 percent) says Republicans in Congress do not have an agreed-upon alternative to replace the ACA, while 13 percent believe they do and a quarter don’t know. Even among those who favor the repeal and replace option, just two in ten (20 percent) believe Republicans have settled on an alternative.

Partisans Divide Over Whether Candidates Should Continue ACA Debate

Six months out from the 2014 midterm election and in the midst of primary battles in many states, the ACA is already a frequent topic of political conversation and the subject of an abundance of campaign advertising. Even at this early stage, about half of registered voters (51 percent) say they are tired of hearing candidates for Congress talk about the health care law and want them to focus more on other issues like jobs, while a smaller share (43 percent) want candidates to continue debating the law.

A familiar partisan divide is evident, with about seven in ten Democratic voters saying they’d rather hear candidates discuss other issues and six in ten Republican voters saying it’s important to keep up the debate. Independents are more split, with half saying they’re tired of hearing about it and 44 percent wanting the debate to go on. Looked at another way, two-thirds of voters who view the ACA favorably say they want candidates to focus on other issues, while almost six in ten of those who have an unfavorable view of the law want debate to continue. 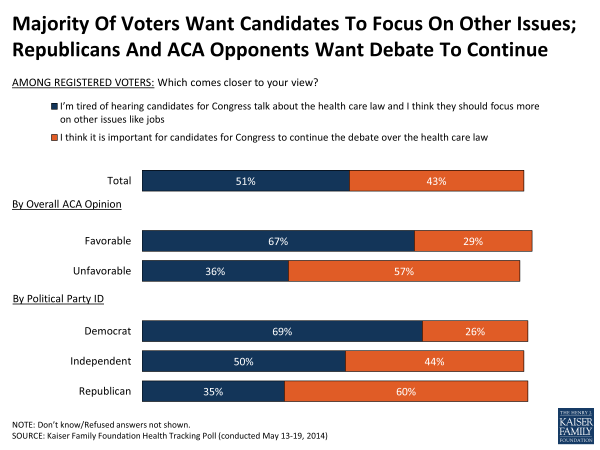 The health care law may be one of the most politicized issues heading into the election season; however, when asked to name the top issues they would most like to hear Congressional candidates talk about, voters’ top mention is the economy and jobs (34 percent). Second on their list is health care (25 percent), followed by a list of issues in the single digits including education (8 percent), energy and environmental issues (8 percent), the federal budget deficit (8 percent), and immigration (7 percent).

The ranking of the economy/jobs and health care as the top two issues that voters want to hear about from candidates is consistent across those who identify as Democrats, Republicans and independents. Further down the list, partisans differ on other issues, with more Democrats saying they want to hear candidates talk about energy and environmental issues (12 percent), and more Republicans mentioning government spending and the federal deficit (12 percent). 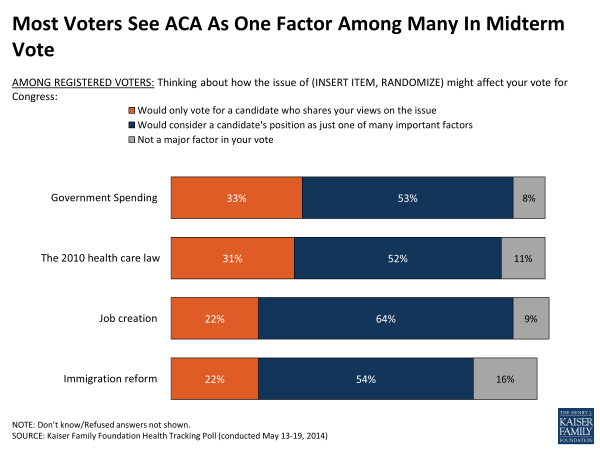 Reflecting the intensity gap mentioned above, voters with an unfavorable view of the ACA are more likely to say they would only vote for a candidate who shares their views on the law than those whose view of the law is favorable (38 percent versus 28 percent). However, when analyzed by party identification, the share who say they would only vote for a like-minded candidate on the ACA is similar among Democrats (33 percent) and Republicans (36 percent), but somewhat lower among independents (26 percent). 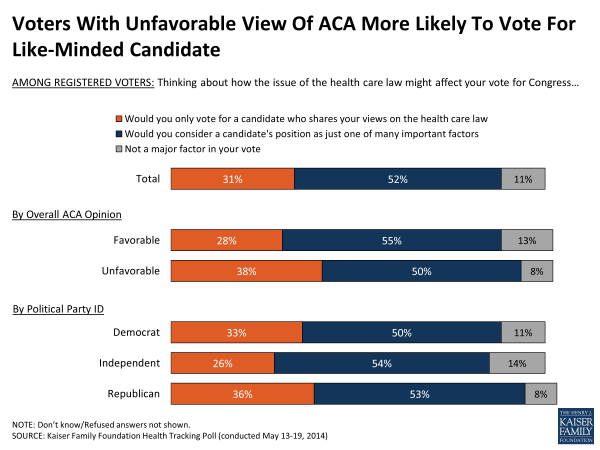 A caveat to this early read on the role of the ACA in the midterms is that with the general election still six months away, most voters say they are not yet paying close attention to the campaign. Just 17 percent of registered voters say they have been able to pay “a lot” of attention to the campaign so far, while roughly half (51 percent) say they have paid “not much” or “no attention” so far. 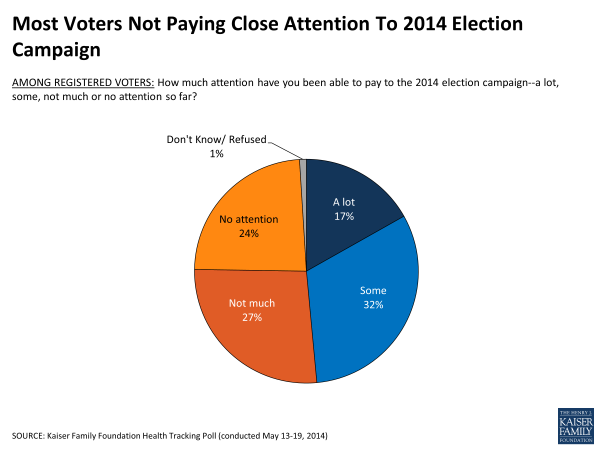