The so-called “individual mandate”  – the provision under the Affordable Care Act (ACA) that requires most individuals to carry a minimum level of insurance coverage and is now being considered by the Supreme Court – has emerged as the least popular element of the reform law and the prime target for its opponents. Yet in practice, the mandate may not be quite as far-reaching as the controversy over it suggests.

The vast majority of Americans already get insurance from their employers, Medicaid, Medicare, the individual market, or other sources of coverage, and will essentially automatically comply with the mandate once it goes into effect in 2014. The Congressional Budget Office (CBO) projects that about 80% of the 272 million non-elderly people in 2014 would be insured even in the absence of the ACA and would therefore already fulfill the mandate’s requirement.

Also, although the ACA requires people to maintain health insurance or else pay a penalty, the law allows a series of exemptions and special considerations, meaning that millions of individuals could be exempt from the requirement to maintain coverage.

The mandate’s exemptions cover a variety of people, including: members of certain religious groups and Native American tribes; undocumented immigrants (who are not eligible for health insurance subsidies under the law); incarcerated individuals; people whose incomes are so low they don’t have to file taxes (currently $9,500 for individuals and $19,000 for married couples); and people for whom health insurance is considered unaffordable (where insurance premiums after employer contributions and federal subsidies exceed 8% of family income).

In simulations prepared for Kaiser, Jonathan Gruber of the Massachusetts Institute of Technology estimates that about 40% of those who would be uninsured in the absence of the ACA would be exempt from the mandate. That means almost 9 in 10 non-elderly people would either satisfy the mandate automatically or be exempt from it. In Massachusetts – a state where an individual mandate was implemented in 2007 and has largely been effective with less controversy than greeted the ACA – about 1% of taxpayers paid a penalty in 2009, and 70% of people uninsured for any part of the year were exempt from it.

To illustrate who would be exempt from the ACA’s individual mandate, we constructed an example of a hypothetical family of four with two 40-year-old adults and two children, living in a region with average health care costs, and without access to employer coverage. This family would receive an affordability exemption from the requirement to maintain insurance if their income was below the tax filing threshold or if the cost of insurance would be more than 8% of their income. The following chart shows what percentage of income such a family would pay for health insurance at different income levels. It is based on the lower bound of CBO’s estimate that a bronze plan (the minimum coverage people would be required to buy) would cost $12,000 to $12,500 per family in 2016, and our calculator (which illustrates eligibility for subsidies to help with the cost of purchasing coverage through new health insurance exchanges). 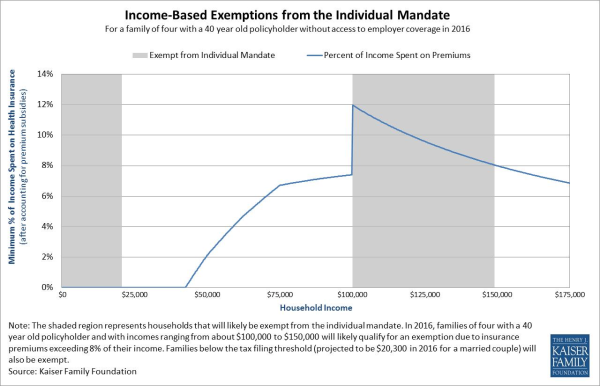 As the chart shows, families would be exempt from the mandate at the lowest income levels because they are below the filing threshold for federal income taxes. Just above this level, the mandate would apply, but families would be eligible for substantial government assistance, either through Medicaid (paying essentially nothing for coverage) or through large premium subsidies in exchanges.

Some families eligible for premium subsidies would have to pay more than 8% of income to enroll in a silver plan in an exchange even after receiving subsidies. However, they could likely apply those subsidies instead to a lower cost bronze plan and end up paying less than 8% of income, so would therefore still be subject to the mandate. If this family’s income rises above about $98,000 (estimated to be four times the poverty level in 2016, at which point they are no longer eligible for premium subsidies) they would likely have to pay more than 8% of income for a bronze insurance plan and would therefore be exempt from the mandate. Indeed, for our hypothetical family, the exemption would apply up to about $150,000 in income, at which point the family’s resources would be high enough so that the cost of a bronze insurance policy in an average cost region drops below 8% of income.

Specific dollar amounts would vary based on age, family size, and the cost of health insurance in an area, but the basic story is similar.

Of course, even with these exemptions, the individual mandate is not without controversy. Reasonable people can disagree about the mandate as a matter of policy. Opponents argue it’s an inappropriate (and unconstitutional) exercise of federal governmental power. Proponents see it as necessary and proper to make reforms of the insurance market work. Some even suggest that the exemptions are too broad and the penalties too low for it to be effective.

The requirement has perhaps become the most powerful political symbol associated with the ACA. Yet the reality of it may not be as sweeping as the symbolism.
Updated June 26, 2012