As the November open enrollment period approaches, consumers in the federal and state marketplaces will soon have the opportunity to renew or change health plans for 2015.  Health insurance plans often change from one year to the next, and some of these changes could have a real impact on costs and coverage, including changes in premiums, cost-sharing, benefits, formularies and choice of doctors and hospitals.  Consumers are advised to review their options carefully before deciding whether to renew their current plan or enroll in a new one.  But will they?

This question will sound familiar to those who have been tracking the Medicare Part D and Medicare Advantage markets, and based on this experience, the advice to review plan options makes good sense.  Medicare Advantage plans in a given market vary in terms of benefits, cost-sharing and provider networks, and plans often make adjustments from one year to the next.  Our analysis of the Medicare Part D market since its inception in 2006 has documented wide variability across plans, and not-insignificant changes in plan costs and benefit design features from year to year.

Yet, even with wide variation across plans and the potential to lower costs by switching plans, our research confirms a high degree of “stickiness” among Part D enrollees, with just over ten percent voluntarily switching plans during a recent  open enrollment period.  Our focus groups of Medicare beneficiaries help explain why.  Seniors told us that they are generally aware of the open enrollment period, in part because they are inundated with marketing materials during the fall of each year.  But, they also said that they have little appetite for what they consider the drudgery of comparing plans – even though they recognized it might be a good idea to do so.

The low rate of plan switching among Medicare Part D enrollees should not come as a total surprise.  Similar results have been reported in studies of younger adults in health insurance marketplaces, including federal workers in the Federal Employees Health Benefits Program (FEHB) and among enrollees in Commonwealth Care in Massachusetts that was established prior to the ACA – suggesting a very high degree of satisfaction or a strong preference for the status quo, or both, in all three health insurance marketplaces (Exhibit 1).1 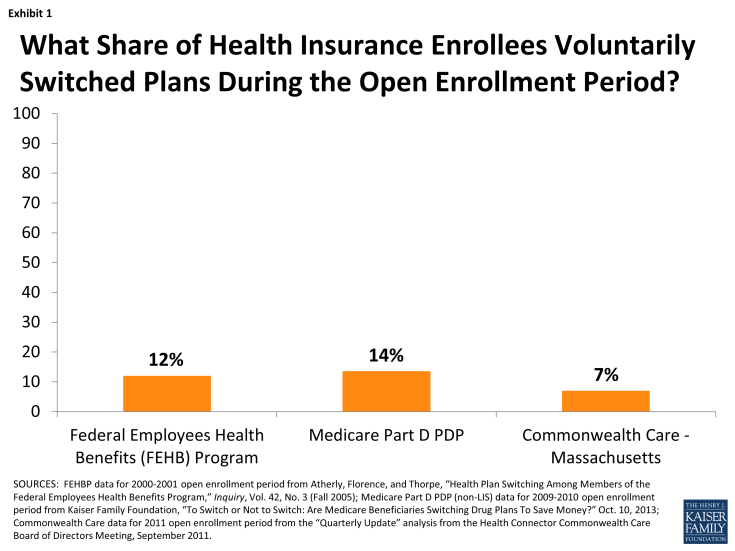 This brings us back to the upcoming November enrollment period for consumers in the federal and state marketplaces.  While the health insurance marketplaces are clearly still in start-up mode, with enrollees still very much on a learning curve, the hope is that marketplace enrollees will carefully review the health plan options available in 2015, and switch plans when it is in their interest to do so.  As my Kaiser Family Foundation colleagues explained in a recent analysis of 2015 marketplace premiums, consumers who chose low premium plans in 2014 may find their plan is no longer a low-cost option in 2015, and could wind up paying substantially more for their coverage unless they switch plans.  And, maybe they will.

On the one hand, adults in the Marketplace may be more motivated than Medicare Part D enrollees to switch plans if the premium changes they face are appreciably larger than those for Part D plans; and it would not be a surprise if Marketplace premium increases and decreases are larger in dollar terms because they apply to a full range of medical services, not just prescription drugs, and could be subject to changes that result from a system that ties government premium contributions to the second least cost silver plan.  Our Part D analysis found that enrollees with bigger premium increases were more likely than others to switch drug plans.   Younger adults are also more likely than seniors to shop online and less likely to have health and cognitive impairments that make these tasks somewhat challenging.  And, this year, they can change plans anytime between November 15 and February 15 — more than the six weeks allotted for Medicare beneficiaries.

This year, the focus during the 2015 open enrollment period may be more on helping people maintain or gain access to coverage, much as it was when the Part D program began.  But over time, there is likely to be interest in understanding whether marketplace consumers are “sticky” like their parents and grandparents on Medicare, or if the apple actually does fall far from the tree.  The lack of consumer engagement during the open enrollment period is a concern if it means consumers get the short end of the “stick.”