Obamacare Debate: Where GOP Governors Stand on Repeal and Replace

This was published as a Wall Street Journal Think Tank column on January 10, 2017.

As the Republican Party’s debate over repealing and replacing Obamacare focuses on the Senate, the views of Republican governors have received little attention and will be important to watch.

This group doesn’t like the Affordable Care Act, President Barack Obama’s signature health law, and will want to support the Republican effort to repeal and replace it. But for many of the governors the interests of their states could run counter to two central elements of the repeal and replace plans.

One of those elements is the repeal of federal funding for the ACA’s Medicaid expansion, which is expected to be part of the budget reconciliation package. Sixteen states with a Republican governor have chosen to expand Medicaid under the ACA, taking advantage of generous federal matching funds they receive when they do so; a 90/10 match when Obamacare is fully phased in. Nevada’s Republican governor Brian Sandoval warned congressional Republicans in a Jan. 5 letter against cutting off funds for Medicaid expansion without a replacement plan, Politico Pro reported.

As the chart shows, these states have a large stake in their Medicaid expansions. For example, 600,000 people have gained coverage through Michigan’s expansion and the state received $4 billion in federal funding for the expansion group in 2015. In Arizona, 413,000 people gained coverage in 2015 and the state received $3 billion in federal funds. Many of these states have augmented their expansions with waivers enabling them to implement conservative reforms they like and giving them political cover to participate in Obamacare. Indiana’s waiver, which requires newly eligible adults to pay premiums and penalizes some beneficiaries if they do not, has received the most attention.

If this funding were to be repealed, many of the newly covered would return to the ranks of the uninsured. The burden of providing health services for this population would then fall on state and county budgets and safety net health providers. On the other hand, these states do have to put up some of their own money to draw down the generous federal match, and some red state governors may prefer foregoing the federal funding and operating a smaller Medicaid program covering fewer people in order to shrink state spending. 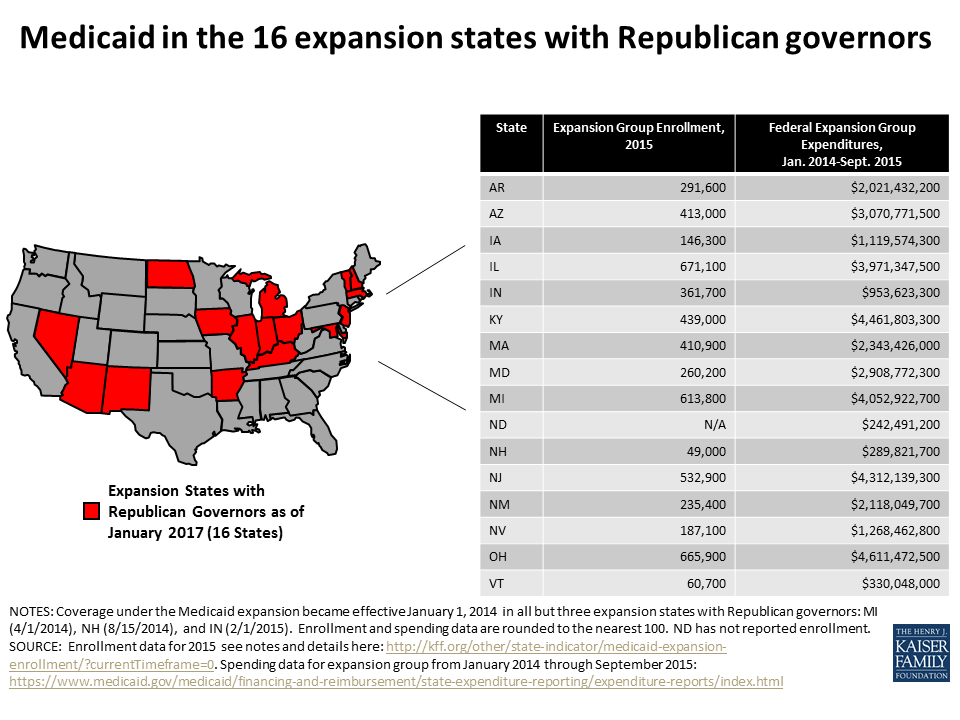 The second element of repeal and replace Republican governors will think hard about is the proposal to transform Medicaid into a block grant program giving states greater flexibility and control of Medicaid in return for reduced federal funding for their states in the future. Greater flexibility through a block grant will appeal to Republican governors, but they know they can get the same flexibility from the Trump administration through federal Medicaid waivers without sacrificing federal funding for their state now or in the future.

They can also advocate for broader and more flexible waiver rules for the states than the current ones–for example, eliminating the time limit on waiver programs, or the requirement that they be conducted for research and demonstration purposes. Some governors may feel that a waiver runs the risk of being reversed if Democrats take the White House in four years. As a former Human Services commissioner overseeing Medicaid for a Republican governor, I would have preferred my own waiver to a block grant with less federal funding. But some Republican governors may prefer to run their own Medicaid programs and reap one hundred percent of the savings from any decisions they make about how they operate their Medicaid programs.

It remains to be seen what role the Republican governors play in the repeal and replace debate. Some may support repeal of the Medicaid expansion and a Medicaid block grant, but many will no doubt see their interests running counter to those of Republicans on Capitol Hill.