This was published as a Wall Street Journal Think Tank column on March 19, 2015. 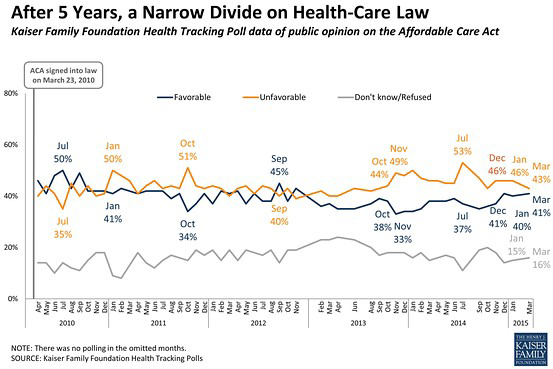 The Affordable Care Act turns five on March 23, and whether you think its standing with the public is improving or remains stuck in a seemingly intractable partisan divide depends on whether you take of a worm’s-eye view or a bird’s-eye view.

As the chart above from the Kaiser Family Foundation’s March Health Tracking Poll shows, the differences in opinion on the law have narrowed. Favorable and unfavorable opinion is in a virtual dead heat, and public sentiment about the ACA has recovered from the falloff that accompanied the HealthCare.gov rollout woes in late 2013. This month, 41% of the American people favor the law and 43% oppose it. People who favor the law mostly like its expansion of coverage, and those who don’t like the ACA mainly say that’s because they perceive the health-care law as driving up insurance costs.

The bird’s-eye view of opinion on the ACA is very different: It shows consistently mixed views on the ACA, with opinion overall leaning more negative than positive and with favorable and unfavorable ratings moving up and down only slightly since 2010. Opinion hasn’t moved much despite two elections, a Supreme Court challenge, a hostage-taking over the government’s budget, dozens of repeal votes in Congress, a rollout debacle, and, now, another Supreme Court test. The reason that views on the ACA don’t change very much is that opinion is split almost perfectly along deeply entrenched partisan lines. Most Republicans have an unfavorable opinion of the ACA (74%). Most Democrats have a favorable opinion (65%). Independents are more divided but lean negative (with 37% favorable and 47% unfavorable). It’s hard to imagine change anytime soon in Republican or Democratic sentiment on the ACA, and with most independents really leaning Democratic or Republican, a big change in their views is not likely either.

Both the worm’s-eye view and the bird’s-eye view are important. Modest changes in opinion can matter in Washington and to ongoing policy debate and in elections. But it’s unlikely that we will see a big shift in opinion on the health-care law unless the ACA morphs into a less volatile political issue.