Despite Anecdotal Reports about Narrow Networks, 87% of Working-Age Adults with Insurance Are Satisfied With Their Plan’s Choice of Doctors; 12% Say They Had to Change Doctors in Past Year

As the ACA’s Open Enrollment Nears End, Most of Those Who Remain Uninsured Are Disengaged 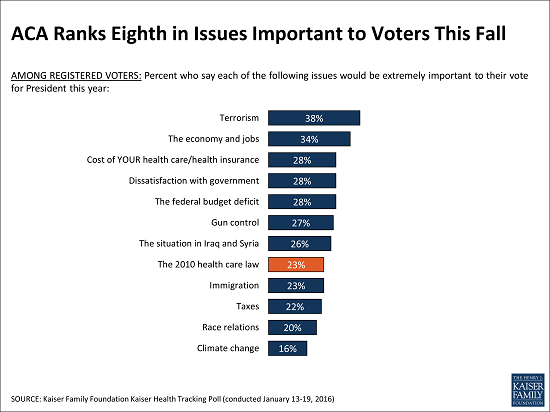 When asked to choose the single most important issue to their vote, just 4 percent of voters choose the ACA, ranking behind the economy (12%) and terrorism (10%), dissatisfaction with government (9%), gun control (7%), the cost of their health care (6%), climate change (5%), and tied with immigration (4%) and the federal budget deficit (4%). For voters across parties, the ACA ranks no higher than fourth.

A minority of the public (39%) was aware of President Obama’s veto of legislation to repeal the ACA, the survey finds. Overall public opinion on the law did not change significantly this month and is closely split, with 44 percent holding an unfavorable view and 41 percent holding a favorable one.

With recent media and political attention focused on concerns about narrow provider networks that limit choices for people with insurance, this month’s tracking poll examines the experiences of working-age adults with insurance and finds the vast majority (87%) say they are “very” or “somewhat” satisfied with the choice of doctors in their plan’s network and 4 percent who say they are “very dissatisfied.” (The poll captures experiences of all insured Americans ages 18-64, not just those in ACA marketplace plans). 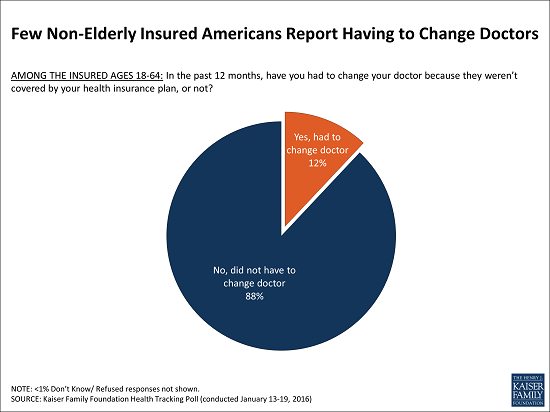 Just 15 percent of the uninsured can correctly say when the enrollment deadline is. Most (61%) also do not know what the fine will be for people who do not get insurance in 2016, and just 1 percent cite the correct amount ($695 per person or 2.5% of household income).

At the same time, two-thirds (65%) say they plan to get health insurance in the next few months, even though nearly half (46%) say they have been without coverage for at least the past two years.

The poll was designed and analyzed by public opinion researchers at the Kaiser Family Foundation and was conducted from Jan. 13 to 19, 2016 among a nationally representative random digit dial telephone sample of 1,204. Interviews were conducted in English and Spanish by landline (481) and cell phone (723). The margin of sampling error is plus or minus 3 percentage points for the full sample. For results based on subgroups, the margin of sampling error may be higher.