Most Say They Can Afford Their Prescription Drugs, But One in Four Say Paying is Difficult, Including More Than Four in Ten People Who are Sick

About half of Americans (54%) report currently taking a prescription drug, and a large majority of them (72%) say their prescriptions are very or somewhat easy to afford. However, about a quarter (24%) say paying for their drugs is difficult, and the share facing difficulties rises among those with low incomes (33%) or currently taking four or more prescription drugs (38%), and is highest for those in fair or poor health (43%).

These are among the findings from the August Kaiser Health Tracking Poll, which expands on findings from earlier this year looking at prescription drug costs. The new poll finds strong majorities of the public support a wide range of policy actions to lower the costs of prescription drugs. At least seven in 10 support each of these four potential policy changes:

Fewer (48%) support changes to encourage consumers to use low-cost drugs by charging them a larger share of the costs when they choose a higher-cost alternative.

Majorities view each of these changes as likely to be effective at reducing drug costs, ranging from 81 percent who say requiring public disclosure about how drug companies set prices would be effective to 57 percent who say so about charging consumers more when they choose high-cost drugs over lower-cost ones. 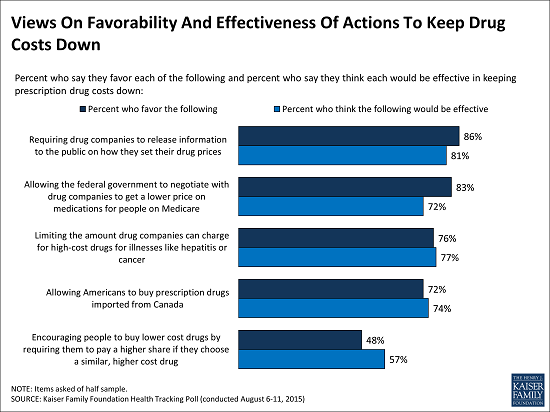 Most of the public (62%) says that prescription drugs developed in the past 20 years have made lives of people in the U.S. better, including 42 percent who say a lot better. Far fewer say they have made them worse (15%) or say they haven’t made much difference (19%). However, the survey also finds a large majority of the public view the cost of prescription drugs as unreasonable (72%). Similar shares say that drug companies make too much profit (73%) and that they are too concerned about profits and not concerned enough about patients (74%).

The survey also assesses the public’s perception of pharmaceutical companies in comparison to other industries. Among the public overall, 42 percent hold a favorable view of pharmaceutical companies, similar to the share holding a favorable view of oil companies (40%) and health insurers (44%) but smaller than the share saying so about doctors (78%), food manufacturers (58%), banks (58%), and airlines (55%).

The August poll also continues tracking opinion on the ACA: 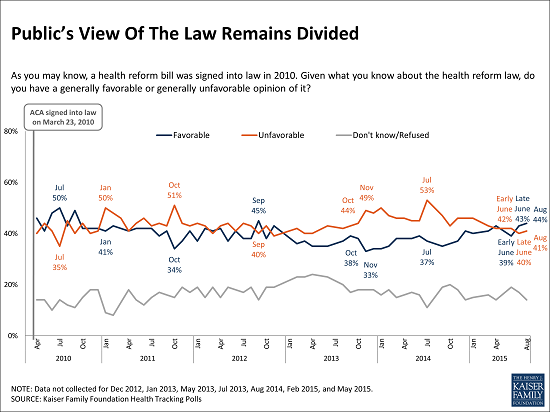 The poll was designed and analyzed by public opinion researchers at the Kaiser Family Foundation and was conducted from August 6-11, 2015 among a nationally representative random digit dial telephone sample of 1,200 adults. Interviews were conducted in English and Spanish by landline (480) and cell phone (720). The margin of sampling error is plus or minus 3 percentage points for the full sample. For results based on other subgroups, the margin of sampling error may be higher.