A recent draft regulation issued by the Treasury Department describes who is eligible for premium tax credits to help them afford coverage offered through health insurance exchanges beginning in 2014. Tax credits will be available to people with incomes between 100 and 400 percent of the poverty level who are not eligible for public coverage such as Medicaid or Medicare and who are not offered affordable health coverage by an employer. The approach that the regulation proposes for measuring the affordability of employer coverage could have significant financial consequences for a modest number of lower- and middle-income families.

Starting in 2014, the health reform law generally requires people to have health insurance and provides tax credits to help them afford it. Those who are offered health insurance through a job, however, are expected to take that coverage and generally are not eligible for premium tax credits. This includes both the worker and any family members who are eligible to enroll in the job-based coverage. There is an exception to this rule, though: if people are offered coverage by an employer that has patient cost-sharing above a certain level or is unaffordable, they are permitted to forgo the employer plan and apply for a tax credit that can be used for coverage in an exchange. Job-based coverage is considered unaffordable if the amount of the out-of-pocket premium for the employer coverage exceeds 9.5% of that person’s income.

While it’s clear how this applies to a single worker without any dependents, determining a family’s eligibility for premium tax credits is far less clear in the law. One way would be to look at what the family would have to pay for coverage based on its size and compare that to its income. A second way, which the Treasury Department has proposed, would judge affordability for the entire family based solely on whether the employee’s contribution for single coverage would exceed 9.5% of family income, regardless how much it would cost the entire family to enroll in job-based coverage. A third hybrid approach is also possible: affordability for the worker could be determined based on the required contribution for single coverage while affordability for the remaining family members would be based on the required contribution for family coverage.

What would this mean for families? We estimated the effect based on coverage in 2008 using demographic and insurance data from the Medical Expenditure Panel Survey and employee premium contribution information from the Kaiser/HRET Employer Health Benefits Survey. The analysis – which assumes no behavior changes by employers in response to the health reform law – suggests that there are about 3.9 million non-working dependents in families (technically, “health insurance units”) in which the worker has access to affordable employer-sponsored coverage but the family does not. Under the draft regulation, these family members would be excluded from getting federal tax credits to help them buy coverage in health insurance exchanges. On average they’d have to pay 14% of their income to opt into the employer coverage, substantially more than what they would pay in an exchange. (Kaiser’s subsidy calculator illustrates what families would pay in exchanges, after taking tax credits into account.) The lowest income workers would generally be eligible for Medicaid, and the higher income workers are unlikely to have to pay more than 9.5% of income for insurance, so people affected the most have incomes under three times the poverty level ($67,050 for a family of four in 2011). 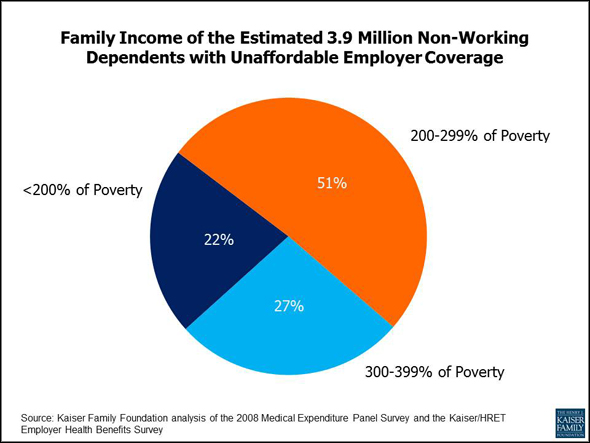 In the draft regulation, the Treasury Department indicated that it expects to exempt these family members from the requirement to buy insurance, so they won’t be penalized if they choose to forego coverage. Some of these families would probably still decide to enroll in their employer coverage even though they would have to pay a large percentage of income for it; that would likely be the case even if they were permitted to buy subsidized insurance in an exchange. People value insurance, and they particularly value employer-provided benefits.  But, some of these family members would undoubtedly remain uninsured.

As implementation of the health reform law proceeds and regulations and guidance are issued, this is one of many seemingly technical issues that may have significant implications. It is the nature of insurance that in many cases – this one included – there may be large consequences for a relatively small number of people. Navigating these tradeoffs is what Kaiser President and CEO Drew Altman described in a recent column as the “art of implementation.”

—Larry Levitt and Gary Claxton (with analysis by Anthony Damico)