U.S. Leads All Donors in First Comprehensive Assessment of Funding for Ebola Outbreak in DRC

A new KFF analysis is the first comprehensive summary of donor funding for the response to the Ebola outbreak in the Democratic Republic of Congo (DRC). The analysis estimates that at least $546 million was provided by donors from August 2018, when the outbreak started, through September 2019. This includes bilateral support earmarked for Ebola from donor governments as well as contributions by multilateral organizations.

The United States provided the largest amount of support, estimated at no less than $148 million, followed by the World Bank ($130 million) and WHO Contingency Fund for Emergencies ($73.1 million). Only half of the total funding, including about one third of U.S. funding, was provided in direct support of the official DRC Response plans. This could have implications for the coordination of donor efforts and whether funding is being directed to the most critical or pressing activities. 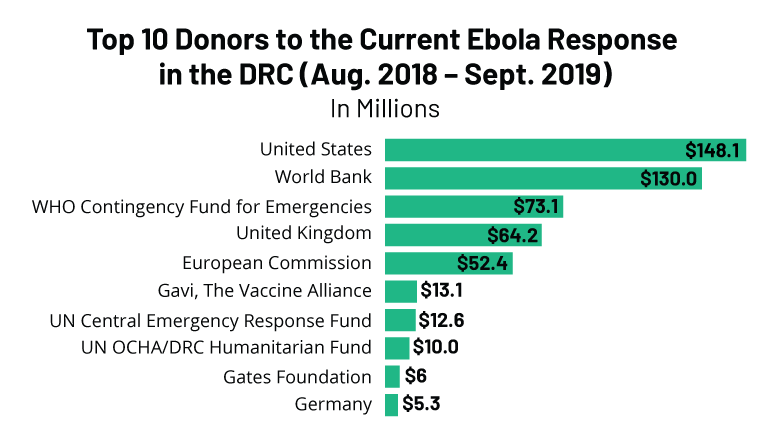 Overall funding amounts could be higher, as donor financing information is limited and fragmented. The analysis suggests coordination with national response plans is at times unclear, and the status of U.S. funding going forward is uncertain.