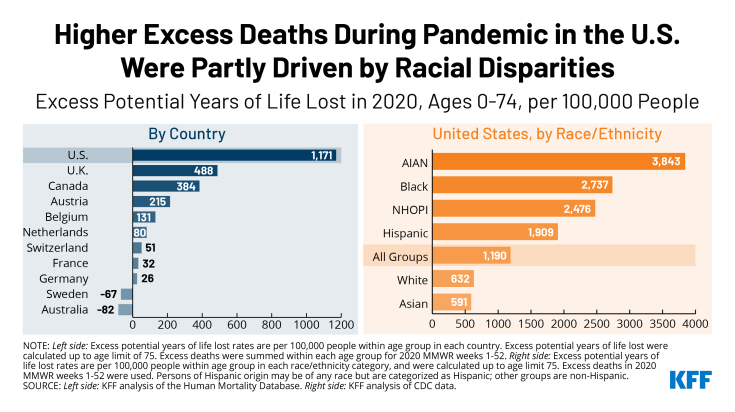 The higher premature excess death rate in the U.S. compared to peer nations was driven in part due to racial disparities. People of color under age 75 were more likely to have died in the U.S. during the pandemic in 2020 than white non-elderly individuals, as shown in the chart below. Among people under the age of 75, American Indian and Alaska Native, Black, Native Hawaiian and Other Pacific Islander, and Hispanic people had over 3 times the premature excess death rate in the U.S. in 2020 than the rate among White and Asian people. Of the potential years of life lost in the U.S., 30% were among Black people and another 31% were among Hispanic people, disproportionate to their share of the U.S. population.

The higher premature excess mortality rate among people of color in the U.S., and in the U.S. as a whole compared to similar countries, is likely due in part to higher COVID-19 risk factor rates and broader racial inequities. For more data and discussion of the gaps in premature excess mortality within the U.S. and among peer countries, please visit the Peterson-Kaiser Health System Tracker.