Poll: As States Start to Ease Coronavirus Restrictions, Few Americans Expect to Stay in Hotels or Fly This Summer, Though Most Plan to Visit a Doctor, Get a Hair Cut and Dine Out

Deep Partisan Differences on Almost Every Dimension of Coronavirus: Republicans are More than Three Times as Likely as Democrats to Say Their State is Moving Too Slowly to Ease Restrictions

Most of the Public, including Most Swing Voters, Disapprove of President Trump’s Coronavirus Response and Overall Job Performance; President Earns Higher Ratings on the Economy

Even as many states start to lift restrictions on businesses and social gatherings, most Americans are expecting the coronavirus pandemic to upend their summers, with few saying they expect to stay in a hotel (32%), fly (23%), or attend a concert or sporting event (19%) during the next three months, the latest KFF Health Tracking Poll finds.

Larger shares of the public say they are likely to engage in other routine activities, including 82% who say they expect to visit a doctor or dentist in person over the next three months. Most say they expect to attend a gathering of at least 10 people (58%), visit a salon or barber (56%), or eat in person at a restaurant (53%).

Democrats are more wary than Republicans and independents about engaging in most of these activities – just one example of a deep partisan divide that colors Americans’ views about the coronavirus crisis.

“There is one pandemic, but Americans increasingly view both the gravity of it and what should be done about it through red- and blue-colored glasses,” KFF President and CEO Drew Altman said. “It’s a sad comment that partisan division, not national unity, is becoming a defining feature of the American response to coronavirus.”

Fewer than half of Democrats say they expect to attend larger gatherings (43%), visit a barber or salon (43%), or eat at a restaurant (39%) over the next three months, while most Republicans and independents say they are already doing these activities or expect to do them soon.

While minorities across party lines say they would stay at a hotel or vacation rental, fly, or attend a concert or sporting event in the coming months, Republican are more likely than Democrats to say they expect to do each of those activities. 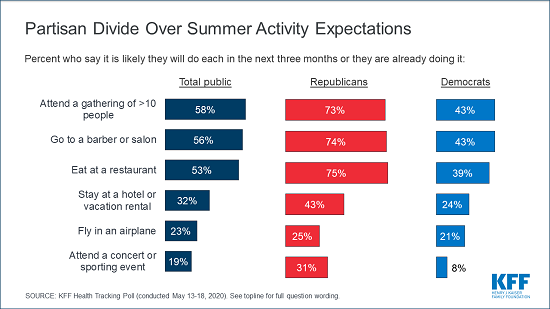 Other examples of the partisan divide include: 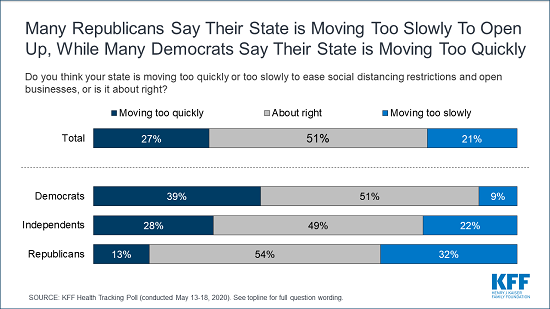 While most Republicans approve and most Democrats disapprove of President Trump’s performance across the board, independents are conflicted. Most disapprove of his overall performance (54%) and on coronavirus (52%) and health care (51%), but most approve on his performance on the economy (59%).

The crucial group of “swing voters,” who are not yet certain about their presidential vote in November, are also negative in their assessments of President Trump’s presidency. Six in 10 swing voters (59%) disapprove of the president’s overall job performance, and similar shares disapprove of his handling of coronavirus (61%) and health care (58%). Swing voters remain positive in their assessments of his handling of the economy (59% approve).

With less than six months before the 2020 presidential election, the poll finds the economy and health care remain the top two election issues, with roughly equal shares naming the economy (25%) and health care (23%) as the most important issue in their vote for president. The coronavirus pandemic, which affects both health care and the economy, ranks third (17%).

The economy stands out by far as Republicans’ top issue, with 40% saying it is the most important to their vote. In comparison, just 13% of Democrats cite the economy as their top issue, ranking it third behind health care (32%) and the coronavirus pandemic (29%).

Swing voters rank health care (30%) and the economy (25%) as the top issues, followed by the coronavirus pandemic (19%).

Designed and analyzed by public opinion researchers at KFF, the poll was conducted May 13-18 among a nationally representative random digit dial telephone sample of 1,189 adults. Interviews were conducted in English and Spanish by landline (283) and cell phone (906). The margin of sampling error is plus or minus 3 percentage points for the full sample. For results based on subgroups, the margin of sampling error may be higher.

KFF will release additional findings from this poll in the coming days.