COVID-19 Outbreaks in Long-Term Care Facilities Were Most Severe in the Early Months of the Pandemic, but Data Show Cases and Deaths in Such Facilities May Be On the Rise Again

Most States Don’t Report Data for Assisted Living Facilities Specifically, but Those That Do Show Cases and Deaths Rising Over the Summer

The rate of new COVID-19 cases and deaths in long-term care facilities declined markedly in May and June after the novel coronavirus swept through nursing homes in April, but recent data show the incidence may be on the rise again, according to a new KFF analysis.

A second new analysis from KFF examines the impact of COVID-19 on assisted living facilities, a type of long-term care facility that, unlike nursing homes, is not federally regulated, and for which there is a dearth of data about COVID-19 cases and deaths. 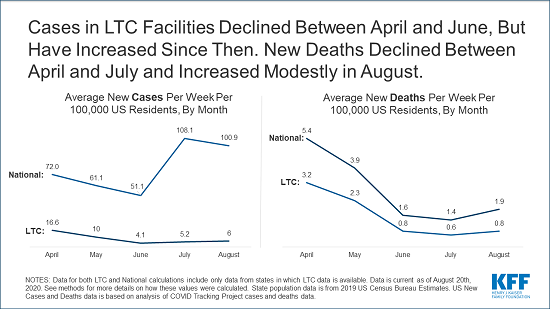 The trend in new cases in long-term care facilities stands in contrast to trends in new cases overall. Nationally, new COVID-19 cases were substantially higher in July and August than in April and May due to the increase in cases among younger people in the summer months. The decline in the rate of new cases and deaths in long-term care settings over time may, in part, reflect measures such as visitor restrictions and more comprehensive testing of residents and staff that were implemented to mitigate the spread of the virus.

Other key findings of the analysis include:

For the full analyses, as well as other data and analyses related to COVID-19 and long-term care, visit kff.org.