As noted in previous analysis, preventing racial disparities in the uptake of COVID-19 vaccines is important to mitigate the disproportionate impacts of the virus for people of color and prevent widening racial health disparities going forward. The Centers for Disease Control and Prevention (CDC) has indicated that vaccine equity is an important goal and defined equity as preferential access and administration to those who have been most affected by COVID-19. Moreover, reaching high vaccination rates across individuals and communities will be key for achieving broader population immunity through a vaccine.

The CDC reports demographic characteristics, including race/ethnicity, of people receiving COVID-19 vaccinations at the national level. As of June 07, 2021, CDC reported that race/ethnicity was known for 57% of people who had received at least one dose of the vaccine. Among this group, nearly two thirds were White (61%), 9% were Black, 15% were Hispanic, 6% were Asian, 1% were American Indian or Alaska Native, and <1% were Native Hawaiian or Other Pacific Islander, while 8% reported multiple or other race. However, CDC data also show that recent vaccinations are reaching larger shares of Hispanic, Asian, and Black populations. Nearly three in ten (28%) vaccines administered in the past 14 days have gone to Hispanic people, 8% to Asian people, and 11% to Black people (Figure 1). These recent trends suggest a narrowing of racial gaps in vaccinations at the national level, particularly for Hispanic people, who have recently received a larger share of vaccinations compared to their share of the total population (28% vs. 17%). While these data provide helpful insights at a national level, to date, CDC is not publicly reporting state-level data on the racial/ethnic composition of people vaccinated. 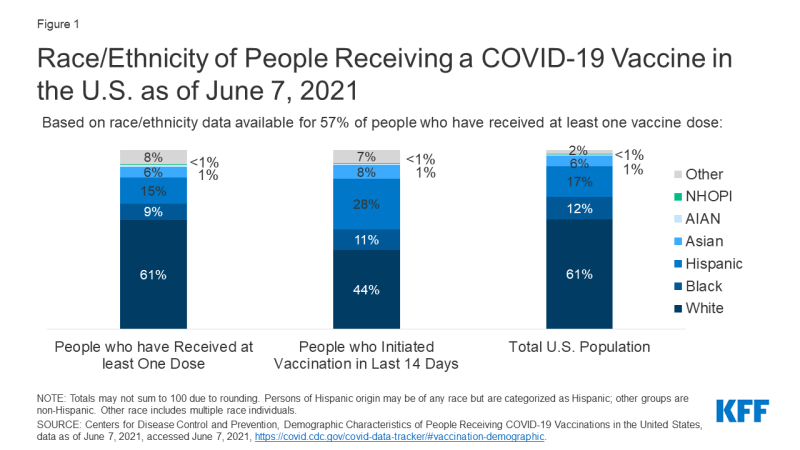 Figure 2 shows the shares of COVID-19 vaccinations, cases, and deaths among Black, Hispanic, Asian, and White people. The data also show the distribution of the total population by these groups as of 2019. Data are not presented for other groups due to data limitations; however, we have conducted separate analysis of vaccination rates among American Indian and Alaska Native people. Together these data show:

We also calculate the percent of the total population that has received a COVID-19 vaccine for 44 states that report racial/ethnic data based on people who have received at least one dose of the vaccine. (States that report race/ethnicity based on total doses administered are excluded from this analysis.) Figure 3 shows the percent of the total population who have been vaccinated by race/ethnicity in each of these states and the total across 41 of these states. (Hawaii, North Dakota, and New Mexico are excluded from the total due to differences in how they report their data.) It also shows the ratio of vaccination rates for White people compared to those of Black, Hispanic, and Asian people as well as the percentage point difference between vaccination rates for White people and the rates for the other groups.

Overall, across these 41 states, the percent of White people who have received at least one COVID-19 vaccine dose (44%) was roughly 1.4 times higher than the rate for Black people (31%) and 1.3 times higher than the rate for Hispanic people (35%) as of June 7, 2021. White people had a higher vaccination rate compared to Hispanic people in all reporting states, except Virginia, Vermont, Missouri, and Maine, and a higher rate than Black people in every reporting state, except Oregon, Alaska, Maine, and Idaho. However, the size of these differences varied widely across states. For example, White people were over twice as likely to have received a vaccine as Hispanic people in Colorado and South Dakota and had at least a two times higher vaccination rate than Black people in Pennsylvania, Iowa, Hawaii, and South Dakota. The overall vaccination rate across states for Asian people was higher compared to White people (56% vs. 44%), which is consistent with the pattern in most reporting states. However, Asian people had lower vaccinations rates than White people in seven states (Iowa, Colorado, Virginia, Utah, North Dakota, Pennsylvania, and South Dakota). 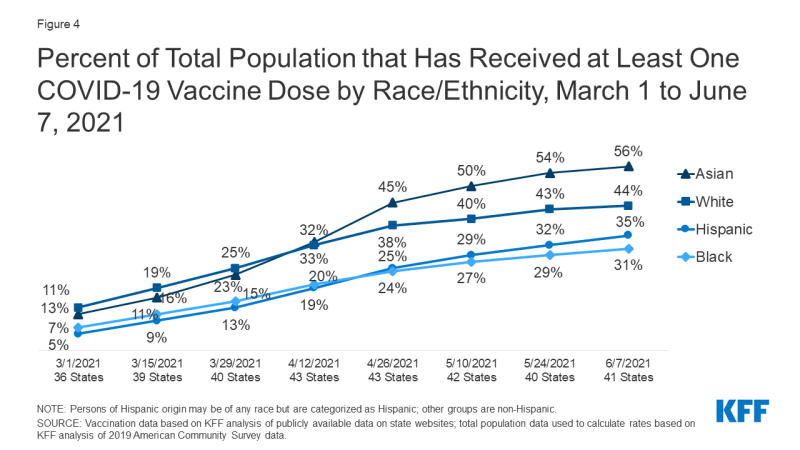 Figure 4: Percent of Total Population that Has Received at Least One COVID-19 Vaccine Dose by Race/Ethnicity, March 1 to June 7, 2021

Together, these data show that despite recent trends suggesting improving equity in COVID-19 vaccination patterns, particularly for Hispanic people, that racial disparities are persisting, particularly for Black people. Addressing these disparities will be important to mitigate the disproportionate impacts of the pandemic for people of color, prevent widening disparities going forward, and achieve national vaccination goals. The federal government, states, and local communities have implemented a range of strategies to address these disparities by making the vaccines more accessible and providing outreach and education to address question and concerns about the vaccines. However, these data highlight the continued importance of efforts to prioritize equity and make it as easy as possible for people to obtain the vaccines.

While the data provide useful insights, they also remain subject to gaps, limitations, and inconsistencies that limit the ability to get a complete picture of who is and who is not getting vaccinated. For example, data gaps and separate reporting of data for vaccinations administered through the Indian Health Service limit the ability to analyze vaccinations among American Indian and Alaska Native and Native Hawaiian and Other Pacific Islander people. As such, we have conducted separate analysis of vaccinations among American Indian and Alaska Native people. Moreover, some states have high shares of vaccinations that are missing race/ethnicity limiting the ability to interpret the data. For example, in Virginia, 43% of vaccinations were among people classified as “unknown.” Three states were not reporting vaccination data by race/ethnicity. Comprehensive standardized data across states will be vital to monitor and ensure equitable access to and take up of the vaccine.

All reported data on vaccinations by race/ethnicity are available through our COVID-19 State Data and Policy Actions tracker and downloadable through our State Health Facts Online tables. KFF will be continuing to update these data on a regular basis going forward as vaccination distribution continues and more people become eligible.