Facebook Twitter LinkedIn Email Print
A new KFF poll of the public’s views on reproductive health issues finds most Americans, including majorities of women of reproductive age, are concerned that access to women’s reproductive health and preventive care services may be limited by the Trump administration’s changes to Title X, the nation’s federal family planning program. The poll examines the public’s views of major regulatory changes to the Title X program, which funds nearly 4,000 clinics nationally to pay for family planning and other preventive services to lower-income women. Originally set to take effect today but blocked by national injunctions issued by multiple federal judges, the new regulations would prohibit federal funding to any family planning clinic that also provides abortion services or referrals, even though none of the funds could be used for abortions. Most of the public (58%) oppose changing the program to exclude organizations that provide abortions or referrals for abortions with other resources, while nearly four in 10 (38%) favor such changes. Most Democrats (68%) and independents (57%) oppose such changes, though Republicans are divided (47% favoring, 48% opposing). 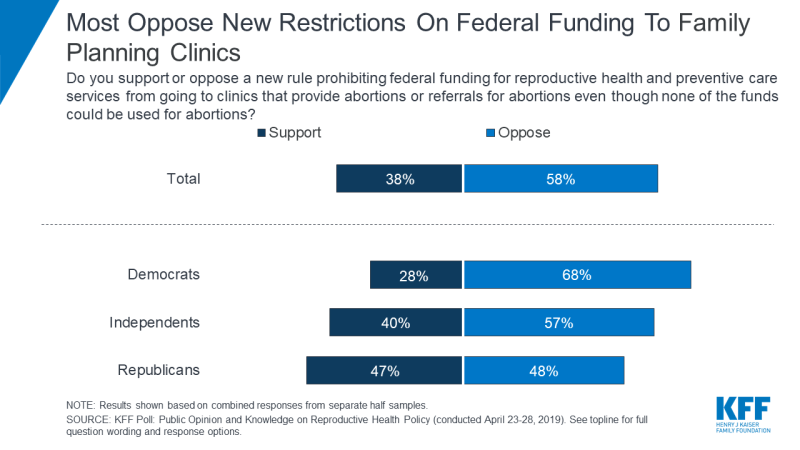 The new regulation could also channel federal family planning funds to “non-traditional” organizations that only offer natural family planning methods or promote abstinence and do not provide other contraceptive services. Most of the public – including at least half of Republicans – oppose allowing federal family planning funds to go to organizations that either only counsel about natural family planning methods (68%); don’t counsel pregnant women and girls about all of their options including prenatal care, adoption and abortion (65%); or do not provide contraception or birth control (59%). Most women, including most women of reproductive age, oppose funding such organizations. KFF polling has consistently found strong support for federal funding for reproductive health services for lower-income women with majorities of Democrats, independents, and Republicans saying it is important the government provide this funding. This month’s poll also finds, in light of the Trump administration’s actions, 68% of Americans, including three-fourths (76%) of women of reproductive age and nearly half of Republicans (49%), say they are “very” or “somewhat” concerned that the new regulations would limit access to women’s reproductive health and preventive care services. 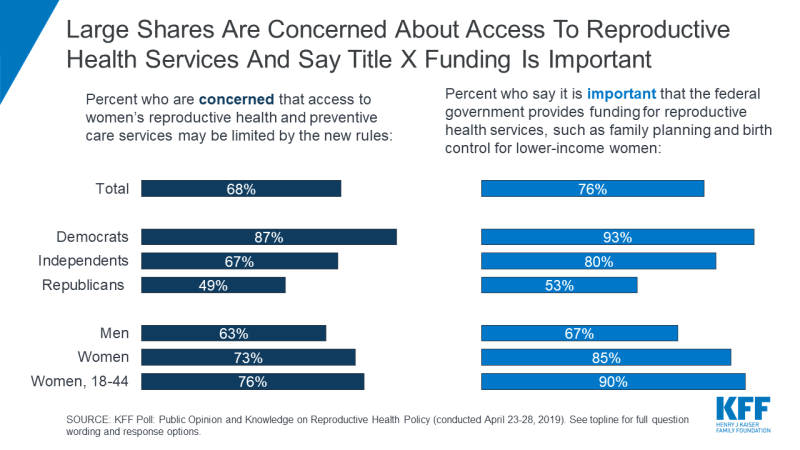 If implemented, the new regulations would prohibit Title X funds from going to Planned Parenthood, the nation’s largest family planning provider and biggest Title X grant recipient. Some states have also proposed cutting off funding to Planned Parenthood for any services. When asked about such changes, about seven in 10 (69%) Americans say their state should continue to make payments to Planned Parenthood, while about three in 10 (29%) say their state should stop payments. Views split along partisan lines, with a large majority of Democrats (86%) wanting Planned Parenthood payments to continue and most Republicans (57%) wanting such payments to stop. Public Split on Fetal Heartbeat Bills that Ban Abortions Early in Pregnancy The poll also assesses the public’s views on other issues related to reproductive health and abortion, including some states’ efforts to enact new abortion restrictions that could lead the Supreme Court to revisit the 1973 Roe v. Wade decision that established a women’s constitutional right to an abortion. These include “fetal heartbeat” bills, enacted in Ohio and under consideration in other states, that prohibit a woman from having an abortion once a fetal heartbeat is detected. The public initially splits on whether their state should enact a fetal heartbeat ban, with half supporting it and nearly as many (44%) opposing it. Republican women are most supportive of such a ban, with about three quarters (77%) favoring it. However, when supporters are informed that a fetal heartbeat can be detected around six weeks into pregnancy, before most women know they are pregnant, enough switch their views to create a more narrow majority (56%) opposing a fetal heartbeat ban. Overall, two-thirds of the public (65%) do not want to see the Supreme Court overturn Roe v. Wade, while about one-third (32%) would like to see the decision overturned. These views split along partisan lines, with most Republicans (56%) wanting to see it overturned and larger majorities of Democrats (80%) and independents (68%) wanting it to stand. If Roe v. Wade were to be overturned, 42% of the public believes that abortion would no longer be legal in their state while half believe it would still be legal in their state. Public Unaware of Some ACA Provisions Affecting Women’s Health Services and Coverage The poll also examines the public’s knowledge about key provisions of the 2010 Affordable Care Act that relate to the availability of reproductive health care services. While most (62%) know that the ACA requires insurance plans to include a minimum package of benefits including maternity care, fewer know that the law eliminates out-of-pocket costs for many preventive services including mammograms (48%); eliminates out-of-pocket costs for birth control (38%), and prohibits insurers from charging women more than men for their health coverage (36%). Partisans Split on Trump Administration Policy that Blocks U.S. Foreign Aid to Foreign Organizations that Perform or Promote Abortion, Even if They Use Their Own Funds to Do So The poll also examines the public’s views of the Mexico City Policy, which every Republican administration since President Reagan has adopted to prevent U.S. global family planning funding from going to foreign organizations that perform or promote abortion as a method of family planning, even using their own funds. The Trump administration has expanded the policy to apply to almost all U.S. global health funding. While the majority of the public does not support this restriction, as with other abortion-related issues, views of the Mexico City Policy diverge along partisan lines. When asked about the expanded policy, most (55%) oppose the restrictions, including a large majority of Democrats (73%) and a smaller majority of independents (53%). In contrast, nearly two-thirds (64%) of Republicans support the expanded restrictions. Designed and analyzed by public opinion researchers at KFF, the poll was conducted April 23-28, 2019 among a nationally representative random digit dial telephone sample of 1,200 adults. Interviews were conducted in English and Spanish by landline (305) and cell phone (895). The margin of sampling error is plus or minus 3 percentage points for the full sample and 9 percentage points for women ages 18-44. For results based on subgroups, the margin of sampling error may be higher.