Sterilization is a permanent method of contraception, and is the most commonly used form of family planning among couples both in the United States and worldwide. For men and women who no longer want to have children, sterilization offers a permanent, safe, cost-effective and efficacious way to prevent unintended pregnancy. Male sterilization is less common than female sterilization, but both are nearly 100% effective at preventing pregnancy. The Affordable Care Act’s no-cost coverage of sterilization has increased the affordability of the procedure for women, but it is still unclear the overall effect this will have on future utilization rates. Recent changes to insurance coverage policy, broader availability of long-acting contraceptives, as well as changes in the health care delivery system may reshape the choices that men and women make regarding the use of sterilization as a contraceptive method. This fact sheet explains the types of sterilization procedures available to women and men, reviews private insurance and Medicaid coverage policy, and discusses issues that affect availability in the U.S.

Female sterilization is an outpatient surgical procedure. The procedure blocks the fallopian tubes, preventing eggs from travelling down the tubes to the uterus and blocking sperm from fertilizing the egg. Data from the Centers for Disease Control and Prevention (CDC) show that among women ages 15 to 44 who use a contraceptive method, one in five used tubal ligation as their method of contraception.1 Sterilization rates are highest among 35 to 44 year olds, formerly married women, and women with three or more births. Sterilization rates are also higher among black and Hispanic women, as well as women with lower income levels (Figure 1). 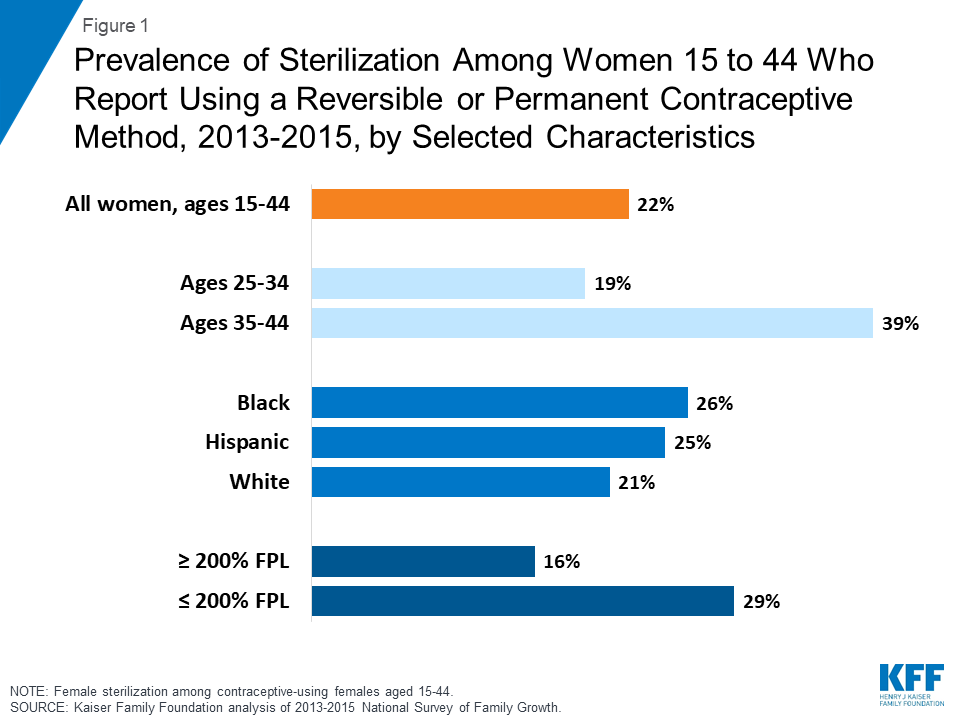 Figure 1: Prevalence of Sterilization Among Women 15 to 44 Who Report Using a Reversible or Permanent Contraceptive Method, 2013-2015, by Selected Characteristics

While highly effective at preventing pregnancy, sterilization does not protect against sexually transmitted infections (STIs). Sterilization should be considered permanent and should only be done by individuals who do not want children in the future. While the procedure can be reversed, the process is invasive, typically not covered by insurance, quite costly, and not guaranteed to work.

There are two main methods of surgical tubal ligation: mini-laparotomy and laparoscopic sterilization. A mini-laparotomy (also called a minilap) is most commonly used immediately postpartum, right after childbirth under general or regional anesthesia. A small incision is placed in the abdomen and part of the fallopian tube is removed or blocked (Table 1). Laparoscopic sterilization, on the other hand, is not recommended for postpartum use.2 While the patient is under general anesthesia, a small incision is made in the abdomen and a small, thin camera is inserted to view the fallopian tubes which are then sealed. Recovery time is quicker for a laparoscopic sterilization than for a mini-laparotomy. These methods are effective immediately, with a failure rate of five pregnancies out of every 1,000 women. However, failure rates increase over time, depending on the procedure used, and can increase to 18 to 37 pregnancies out of every 1,000 women ten years after the procedure is completed.3 Complications are rare, but they can include bleeding, infection, and ectopic pregnancy.

Until recently, there was one nonsurgical method of female sterilization, but it is being phased out in the United States. Approved by the FDA in 2002, Essure is a device that is comprised of two flexible coils which are inserted into each of the fallopian tubes through the cervix. Over time, scar tissue builds up around these coils, blocking the tubes. This process takes about three months to become effective. Although over 750,000 women have received Essure since 20024, there has been an increasing number of adverse event reports. Due to these reports, the manufacturer, Bayer, decided to stop selling Essure in the United States by December 31st, 2018.5

Male sterilization, also called a vasectomy, is an outpatient procedure. In the traditional procedure, a doctor will make two small incisions on either side of the scrotum in order to clip, cut and tie, or cauterize the vas deferens, which connect the testicles to other glands. There is also a newer “no-scalpel” technique in which only a small puncture in the scrotum is needed to reach the vas deferens, reducing complications and recovery time. Despite lower frequency of use, vasectomies are safer, cheaper, and more effective than female sterilization. Only one out of every 1000 women will become pregnant using this contraceptive method; however, vasectomies are not effective immediately. It usually takes three months for sperm that is left in the tubes to be reabsorbed or ejaculated. Until then, an alternate form of contraception must be adopted. Male sterilization also does not protect against STIs. Non-surgical alternatives, such as spring clips, have been available in the past, but the vast majority of men use surgical methods of vasectomy.6

An estimated 5% of men in the United States have undergone a vasectomy.7 Use is more common among married, white men over the age of 35.8 Unlike women who have undergone tubal ligation, the prevalence of male sterilization rises with income and education (Figure 2).9 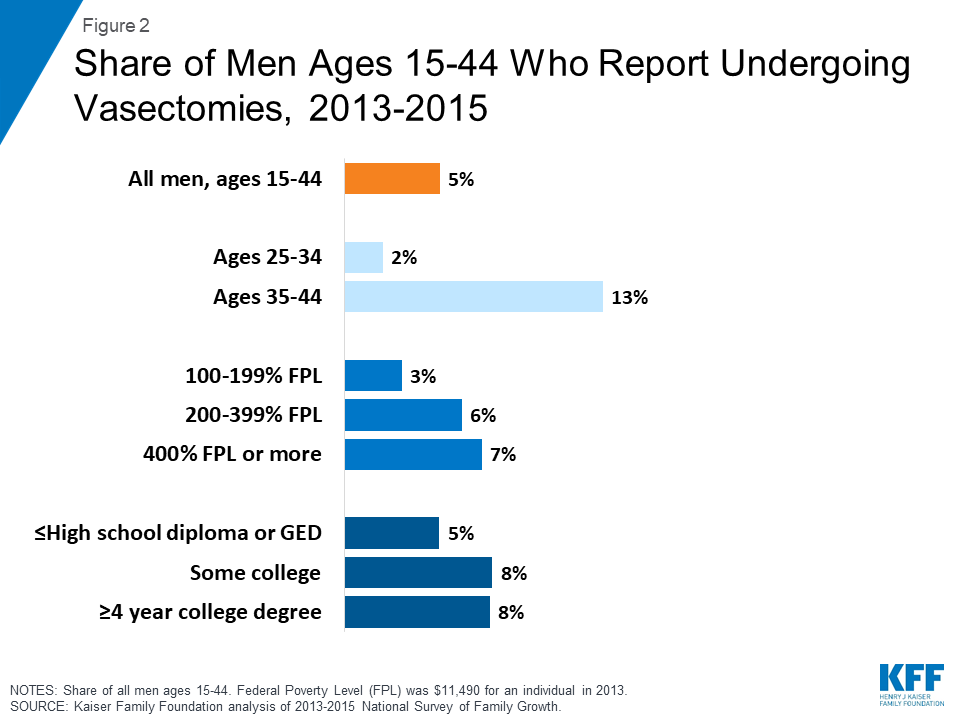 Sterilization is a highly cost-effective method of contraception. Although it has high upfront costs, it typically requires no follow-up care, and therefore can be cheaper over the long-term than other methods. Depending on location and procedure type, among other factors, female sterilization procedures range from $1,500 to $6,000, whereas a vasectomy may cost between $350 and $1,000.10

Medicaid, the national health coverage program for low-income individuals, is financed and operated jointly by the federal and state governments. Family planning coverage is mandatory under Medicaid, meaning that all states must cover this category of benefits, but states have historically had discretion as to which specific services are covered, including sterilization. States that have not expanded Medicaid have retained the authority to determine sterilization coverage requirements for both men and women. However, in states that have taken up full-scope Medicaid expansion, the ACA’s requirement for full coverage of all 18 methods for women applies to new Medicaid beneficiaries who qualify as a result of ACA expansion, meaning that all sterilization methods for women in this group must be covered. The requirement, however, does not apply to vasectomy, but most states report that they do cover the procedure for the men enrolled in their full-scope program. Given that the Medicaid expansion has opened the pathway for more men to be covered, it is likely that more low-income men now have coverage for vasectomies, especially in states that have expanded Medicaid under the ACA.

Regulations prohibit federal funds from being used for sterilization for women younger than 21 years of age. They also require that an informed consent form be signed by the woman desiring the sterilization at least 30 days prior to the procedure. In the event of a premature birth, consent must have been obtained at least 30 days prior to the expected due date. In the case of emergency abdominal surgery, at least 72 hours must have passed between obtaining consent and the procedure.11 This provision was implemented to guard against coercive practices and abuses that were historically directed towards low-income women, women with disabilities, women of color, and incarcerated women. However, some advocates claim that this requirement places a burden on poor women seeking sterilization services that women with private insurance do not face.12 A November 2010 study showed that 47% of women on Medicaid who requested sterilization but were denied due to a problem with their informed consent form or the waiting period became pregnant again the next year.13

Some states have extended access to family planning services to uninsured populations through the use of the Medicaid family planning expansion program that provides Medicaid coverage solely for family planning services to women and men who do not qualify for full Medicaid benefits. These programs, available in 25 states,14 are not required to cover sterilization procedures, but most report that they cover tubal ligations and vasectomies.15 In addition, while the majority of public funding for sterilization comes from Medicaid, a share is provided by the federal Title X National Family Planning Program and the Maternal and Child Health and Social Services block grants. Federal regulations, such as the 30-day waiting period, apply to these funds as well.

Currently, there are federal and state laws that allow providers with religious objections to refuse sterilization services to patients. The Church Amendment, passed in the wake of Roe v. Wade, prohibits the federal government from requiring a provider to assist in abortion or sterilization services that violate their religious beliefs. In addition, 18 states have laws that allow individual providers or institutions to refuse these services for religious reasons. Four states confine this right of refusal to private institutions (Figure 3).16 In areas with a limited choice of health care providers, the scarcity of these services could be particularly challenging for women. 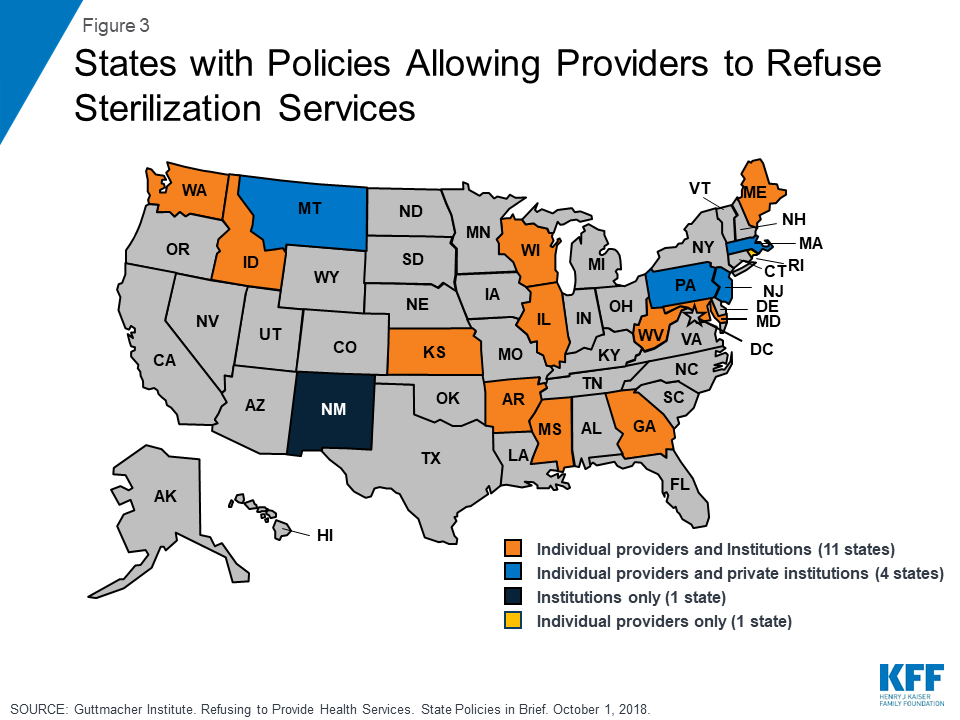 Another challenge to the availability of sterilization services is the growing number of acute care hospitals that are affiliated with the Catholic Church. These hospitals must adhere to the religious restrictions required by the U.S. Conference of Catholic Bishops, which prohibit the use of sterilization.17 These directives also prohibit referrals for contraception, abortion and sterilization services. Currently, 10 of the 25 largest health systems nationwide are Catholic-affiliated. There is concern that the growing dominance of Catholic hospitals in some areas may limit access to tubal ligations and post-delivery sterilization care as recommended by medical professional guidelines.18 According to the Catholic Health Association, in 2016 there were over 529,000 births in Catholic Hospitals.19 Lack of a post-partum sterilization option could pose a particular challenge for women deliver in communities where the only hospital is part of a Catholic health system (Figure 4). Catholic-affiliated hospitals receive almost half of their revenue from public sources, such as Medicaid and Medicare, and serve diverse populations who may not be aware of the limits placed on their care, nor follow the hospital’s religious tenets.20 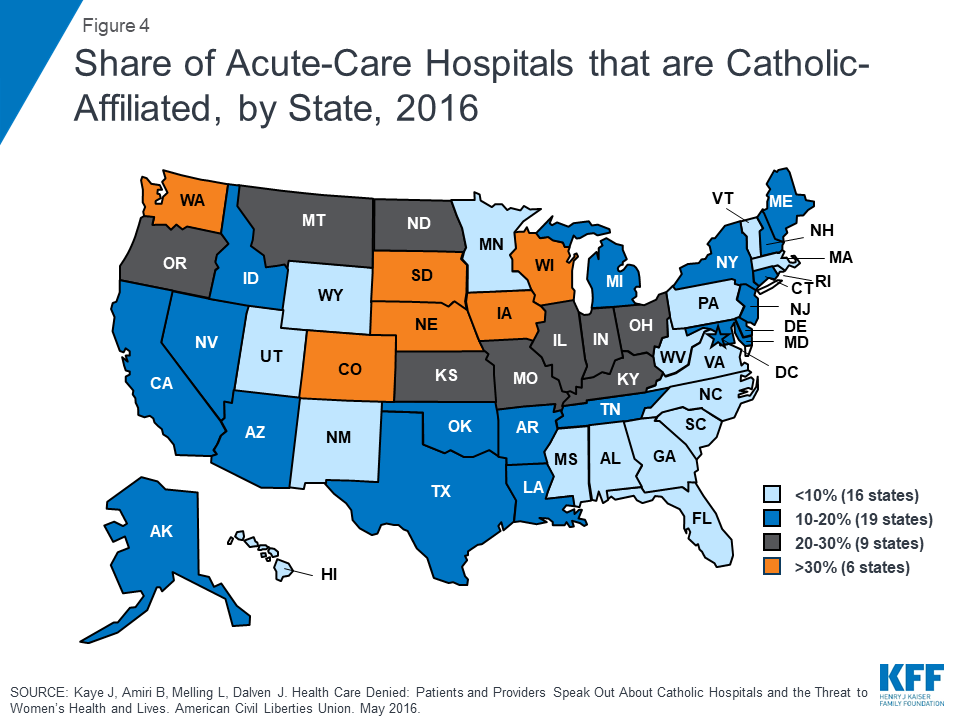 Figure 4: Share of Acute-Care Hospitals that are Catholic-Affiliated, by State, 2016

Sterilization, a safe, cost-effective, permanent form of contraception, is more common among women than men, and rates have declined slightly over the past decade. Under the ACA, most private insurance plans as well as Medicaid expansion programs now cover sterilization procedures without cost sharing for women, but men do not have the same level of guaranteed coverage for vasectomies. While expanded coverage may promote greater utilization of sterilization as a contraceptive option among women, it remains to be seen whether the growing availability of LARC will offset this as IUDs and implants serve as a possible substitute. As with other contraceptives, approaches to expand access to sterilization, such as reducing or eliminating the waiting period for women on Medicaid, greater patient education, mandated coverage for vasectomy, and maintaining the availability of clinicians employed by hospitals that can provide these services will likely be the subject of debate in the years to come.