What Americans Pay for Health Insurance Under the ACA, JAMA, March 19, 2014 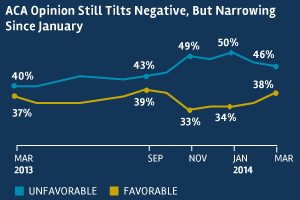 The March Kaiser Health Tracking Poll finds that the gap between unfavorable and favorable opinions of the ACA narrowed this month among the public and the uninsured, and more want Congress to improve the law than replace it. The survey also finds that six in ten of the uninsured are unaware of the March 31 deadline to sign up for coverage, and half say they plan to remain uninsured.

Based on a baseline survey of low-income Americans and the Affordable Care Act (ACA), this report, The Uninsured at the Starting Line in Missouri, provides data on insurance coverage, barriers to care, and financial security among uninsured adults before ACA implementation in Missouri.

The brief provides an overview of what consumers can expect during the second annual Open Enrollment period under the Affordable Care Act (ACA), which runs from November 15, 2014 through February 15, 2015. It is the second opportunity for uninsured individuals to enroll in private insurance coverage, premium tax credits and cost sharing subsidies and the first time that people newly insured in 2014 can renew their health plan coverage and subsidies. It also overlaps with the start of the tax filing season, during which subsidized individuals will undergo tax reconciliation of their 2014 financial assistance and the individual responsibility provisions of the ACA will be enforced.

Larry Levitt’s November 2014 post looks at the challenges with people not understanding basic health insurance concepts as millions of them evaluate and choose health plans during open enrollment season for insurance in 2015.